This walk is not called The Inn Way for nothing and where we parked in Reeth there were the Black Bull Hotel, The King’s Arms and The Buck Hotel. 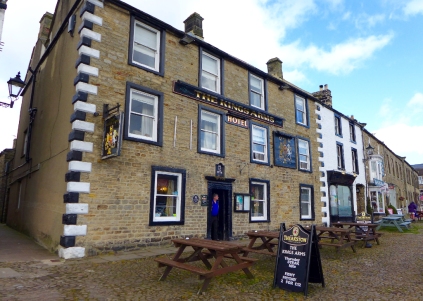 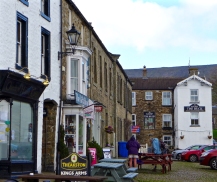 One of the signs on the Black Bull is upside down. Dating from 1680 it is Reeth’s oldest surviving pub. Bob Sykes, a previous landlord of the pub, was more than surprised when National Parks officials took exception to his attempts to tidy up the exterior of the pub. He removed the render from the hotel to expose the original 250-year-old walls. The work was partly carried out to comply with English Tourist Board accommodation grading requirements. 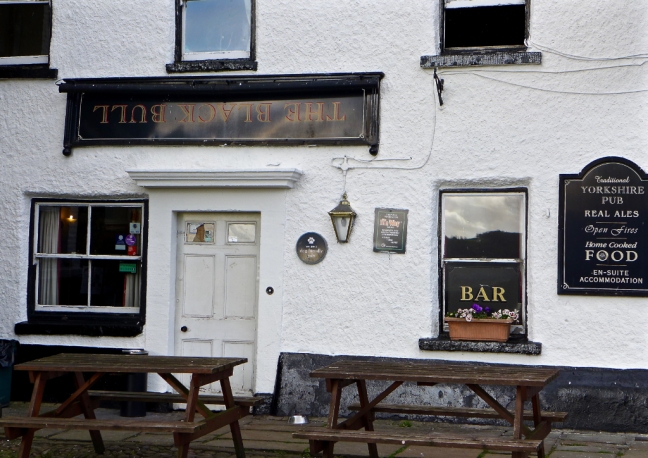 We had to leave Reeth to head back up the valley to where we had left the Inn Way on the previous walk. It was to be a high level, circuitous, route as Sid the Yorkshireman (also known as Morley) wished to find Morley’s Folly as indicated on the OS map.

This entailed going over the swing bridge. This was re-built in 2002 after it had bee washed away by floods. The Swale is the fastest flowing river in England and can rise by 10 feet in 20 minutes. Swale means ‘rushing river’ in Old English. 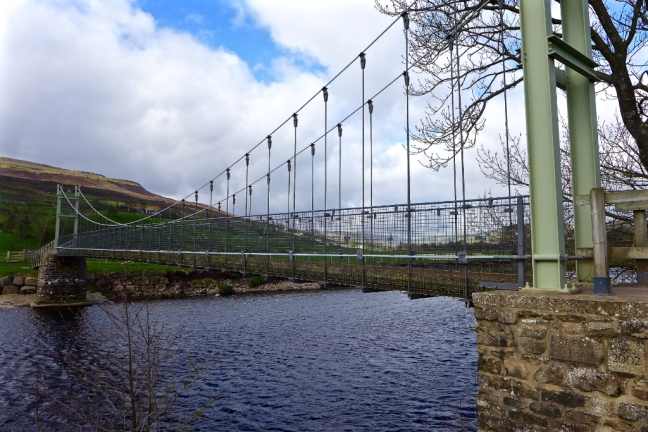 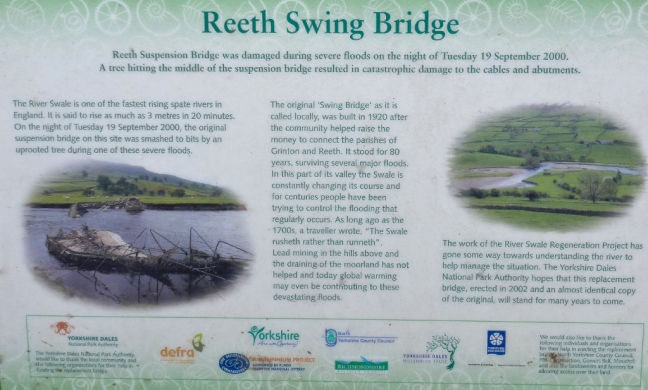 We then climbed past Harkerside Farm to High Harker Hill. 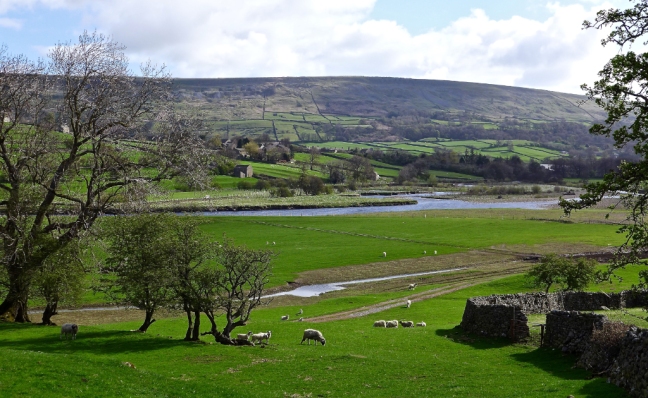 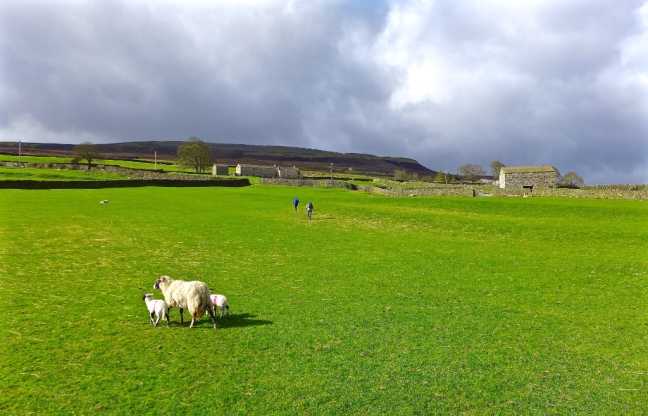 There were  fine views along Swaledale towards Calver Hill. 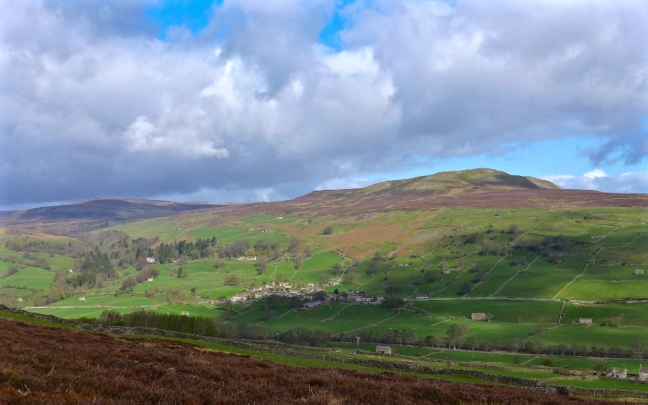 We then entered a lead mining area and had to watch out for holes. Mining started in Roman times. The area around Reeth prospered in the 17th and 18th centuries as a centre for lead mining and hand-knitting. 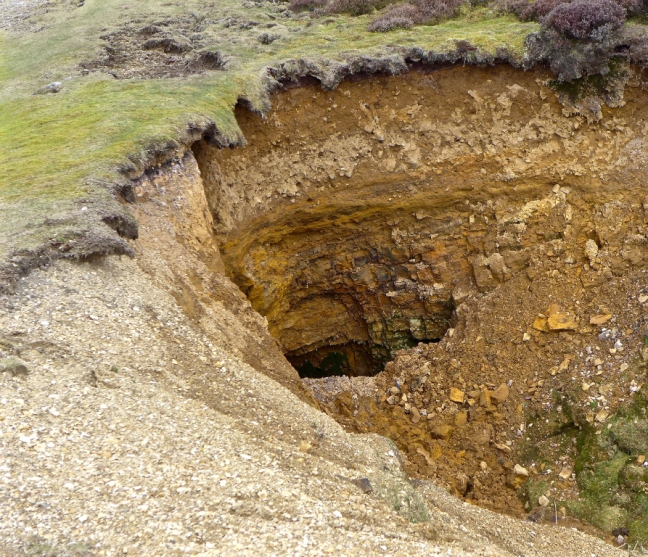 It was quite windy higher up and so we stopped behind a shooting lodge for our coffee and banana break near Blue Hill. The tracks are well maintained by the shooting fraternity. 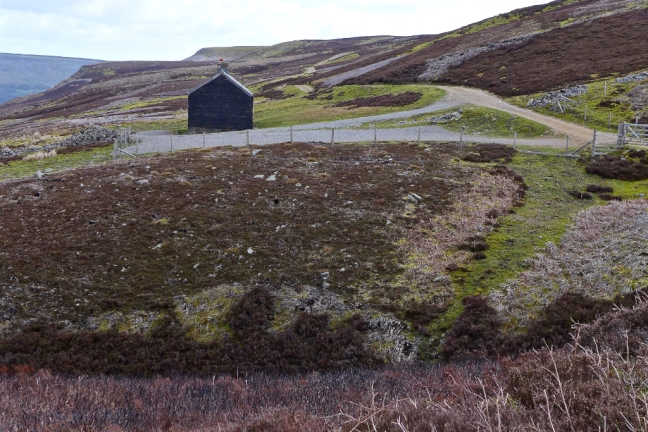 There were some dramatic shades of light. 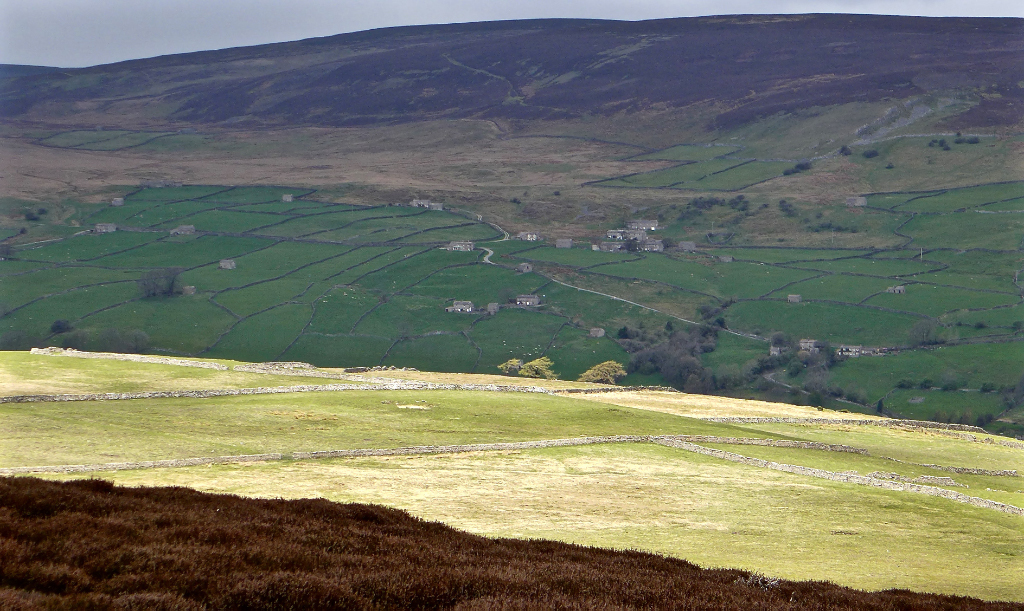 This was not Sid the Yorkshireman’s folly. 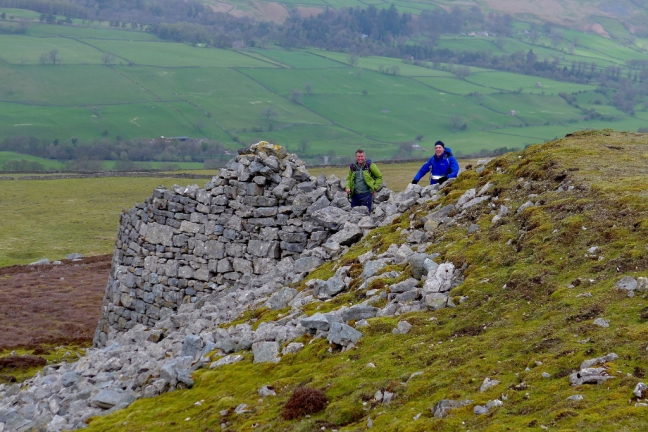 We spent a good half-an-hour looking for the folly, without success, amongst a desolate former mining area. 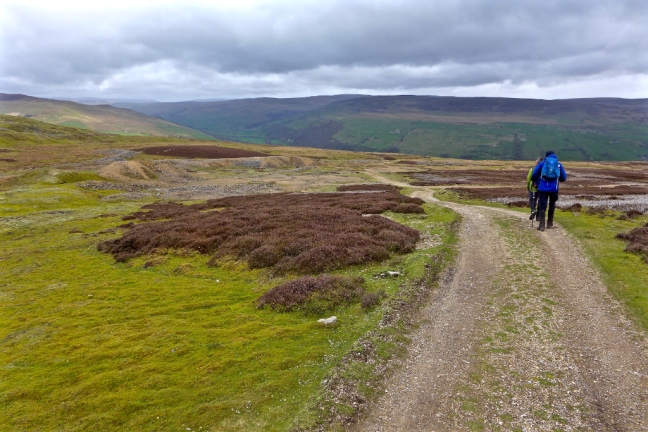 Dropping off the high fells we came across Sunter’s Garage Shelter which was a fabulous shelter from the wind. 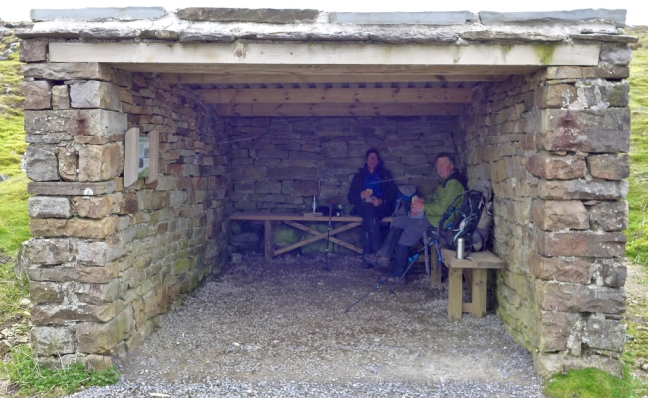 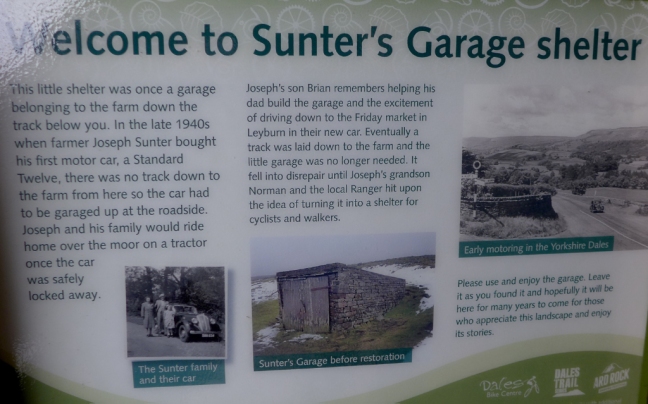 What a lunch-time view. 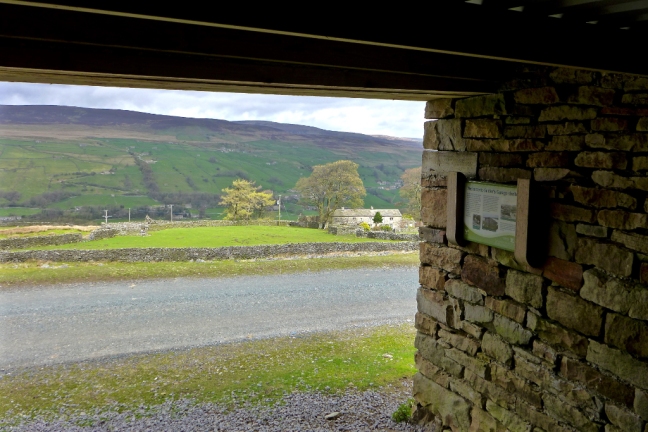 We descended past High Whitaside to the unnamed waterfall on Haverdale Beck to resume the route on the Inn Way. 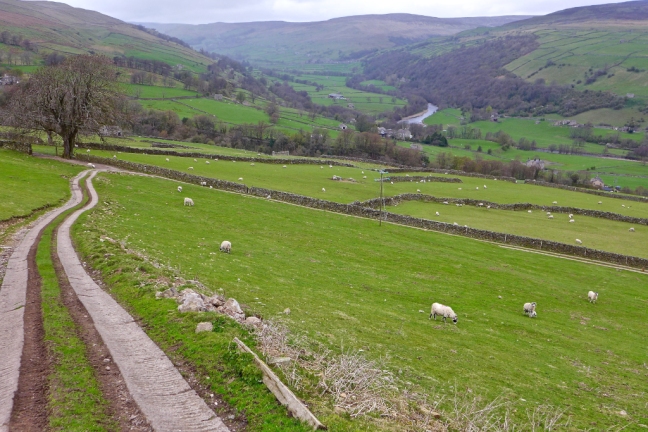 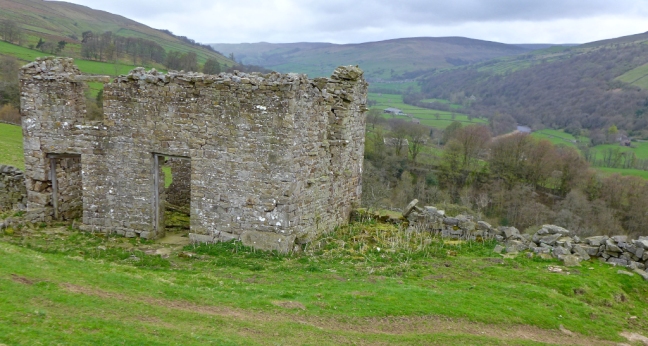 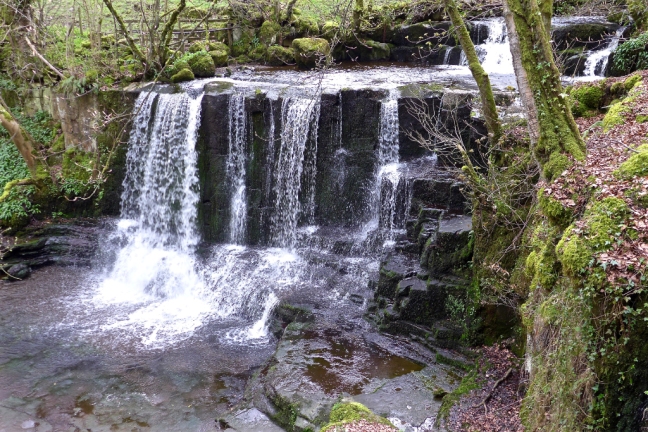 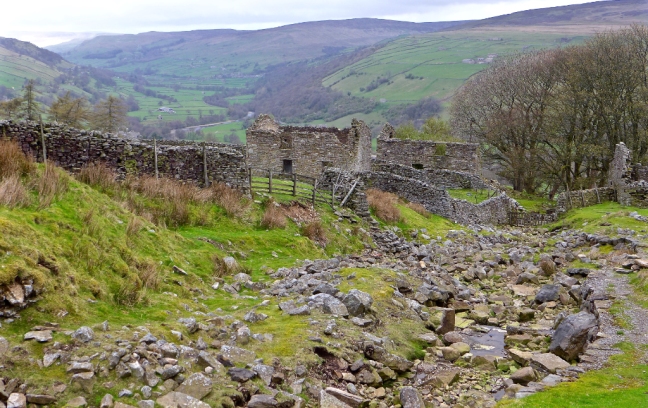 After a little road walking a delightful bridleway and track were followed back to Reeth. 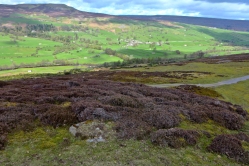 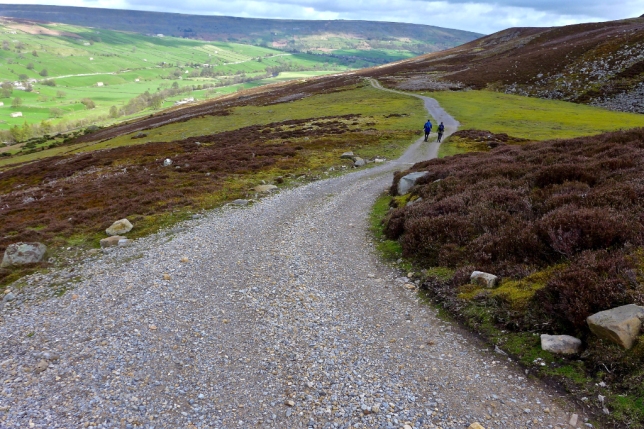 The day was completed watching the farmer get his sheep in. 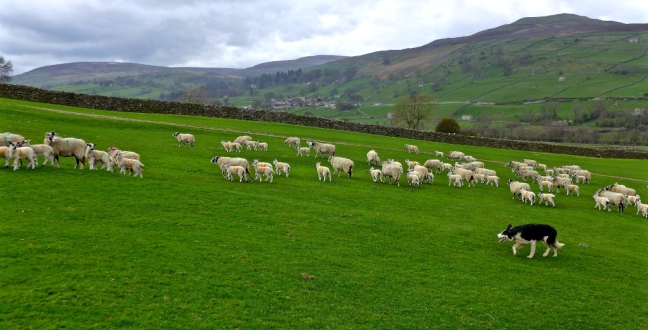 No walkers had been passed all day until on the final path, when we made way for a large group of primary school children! They may have been heading to Maiden Castle, which we had passed. It is hidden away on Harkerside Moor. It was built during the Iron Age over 2,000 years ago by the Brigantes tribes. It is thought to have been a ceremonial or religious site.