My wife, Celia, and myself were visiting friends in the Dorking area and meeting up with them always involves at least one days walk with Alan and Dan, two experienced long-distance walkers who have  been to such exciting places to walk as Everest Basecamp, the Annapurna Circuit, Climb of Kilimanjaro, Climb and Tour de Mont Blanc, The West Highland Way, The Stubai Alps High Way,  as well as joining me on long-distance walks such as The North of England Way, The Westmoreland Way and The Staveley- Foxfield Horseshoe (see earlier blogs). So the conversations flow like the long distance walks.

It was an opportunity to give my new rucksack a dry run before going to Bavaria.

Arriving at Vauxhall Station, I am sure MI5/6 were hoping to recruit me as the next James Bond. That’s before I had drunk some gin and tonic. 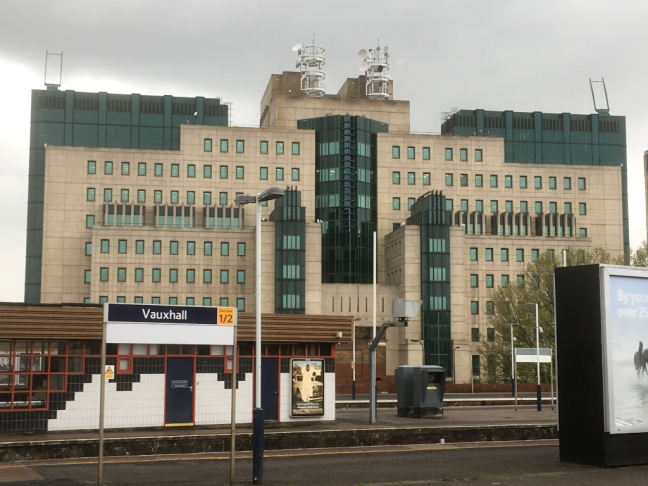 We eventually arrived in Dorking to Alan’s super garden and, before dinner, the welcome gin and tonic. 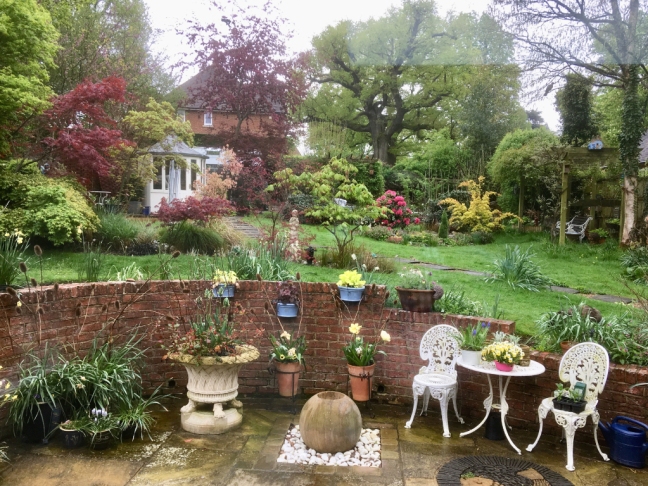 There were even wild parakeets and pheasants in the garden. It is normally warmer in the south compared to Yorkshire, but this weekend was to prove an exception to the rule. At times it was freezing at 5-6 degrees!  I was so glad I had put a Rohan body warmer in my case.

We visited the delightful town of Alfriston on the South Downs Way, a walk which Alan and Dan had fairly recently completed. There was a compulsory cake stop for Dan. 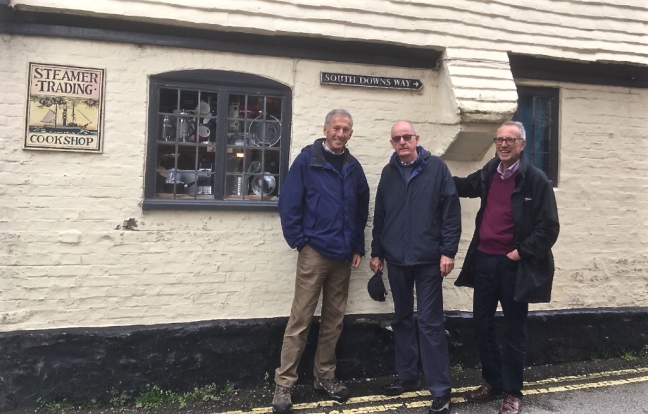 We then continued to what was Charterhouse Farm near Lewes in East Sussex.

Alan had arranged a walking tour of the house, which was fascinating but no photographs were allowed. The Bloomsbury Group were associated with it and from 1916 it was the home of artists Vanessa Bell and Duncan Grant. Over the following half-century Charleston became the country meeting place of the Bloomsbury group of artists and intellectuals. Garnett, Clive Bell and Maynard Keynes lived at Charleston for considerable periods; Virginia and Leonard Woolf, E.M. Forster, Lytton Strachey and Roger Fry were frequent visitors.

Inspired by Italian fresco painting and the Post-Impressionists, the artists decorated the walls, doors and furniture at Charleston. There are murals, painted furniture, ceramics, objects from the Omega Workshops and works by Renoir, Picasso, Derain, Matthew Smith, Sickert, Stephen Tomlin and Eugene Delacroix, which change from time to time.

It is a fascinating place to visit.

We then headed to Berwick Church, which has some beautiful paintings and murals by the Bloomsbury Group. 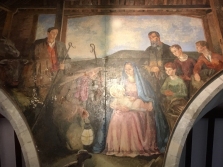 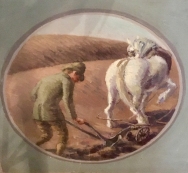 Finally, we then went to the National Trust Monk House in Rodmell in East Sussex, the home of Virginia Woolf. It was chosen by Virginia and her husband Leonard for the garden. 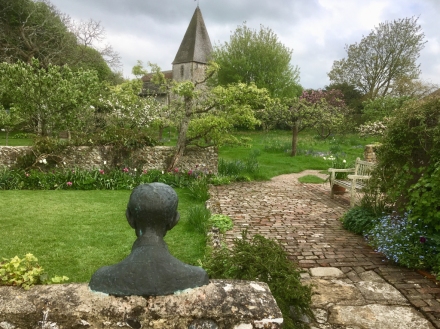 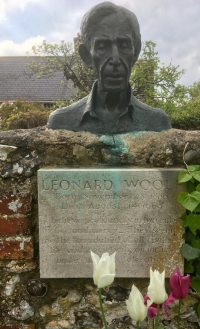 The house is interesting too with their furniture and artworks. 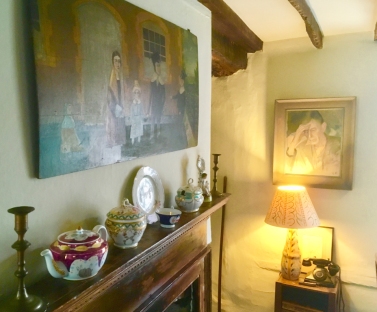 In the evening we had an excellent pub meal in the recently refurbished Queens’s Head in Dorking. 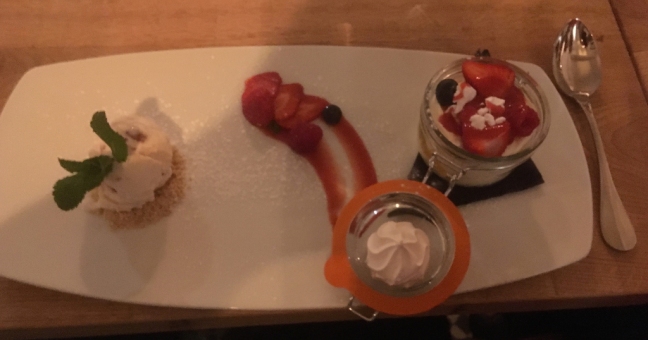 Dan nearly had a heart attack through laughter when we started talking about whether I would be wearing the Lederhosen, the German National Costume, in Bavaria. He has a vivid imagination.

Stranger things have happened so watch this space………..

On the Sunday we went to Thursley National Nature Reserve which has extensive areas of open dry heathland, peat bogs, pine and deciduous woodlands. There are over 20 species of dragonflies and the bog raft spider. There is the Dartford warbler, stone chats, gold crests, red starts, white throats and wheatears and other birds. 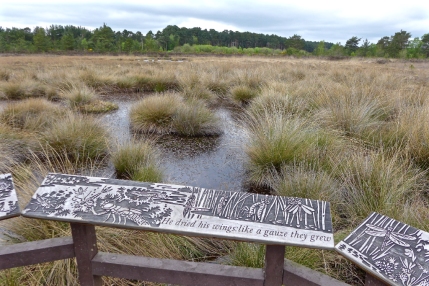 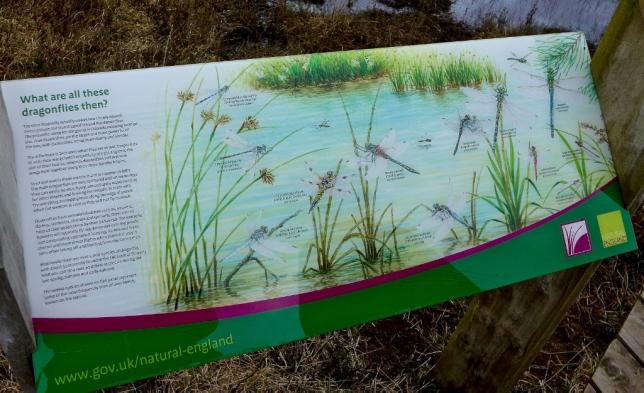 Finally, we went to the Devil’s Punch Bowl a large natural amphitheatre near Hindhead Surrey. The London to Portsmouth road (A3) skirted the centre of the site before the Hindhead Tunnel was built in 2011.  The former route of the A3 can be seen. 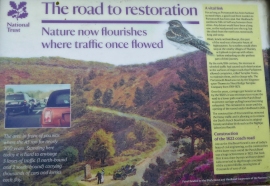 We left Dorking in pouring rain and freezing cold conditions and it was not before we got back to Yorkshire that the sun came out. Arriving back at our house a sparrowhawk was just finishing its meal. Probably eating one of our visiting blackbirds. That’s what happens when we go away! 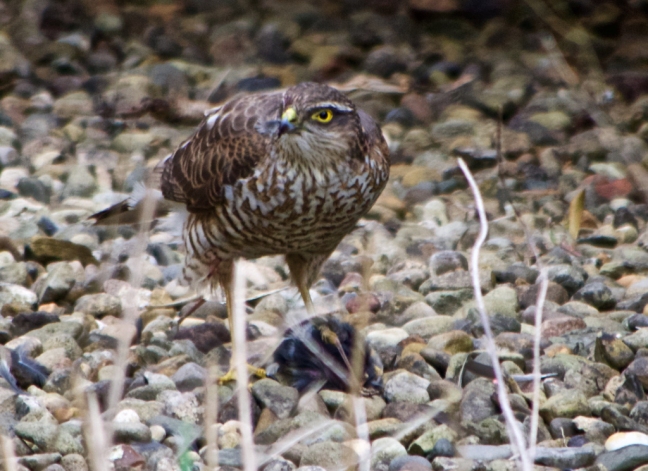