After an exciting summer, with visits to Bavaria, The Orkneys, Faroes, Iceland and Greenland, it was now time to start a new long-distance walk in Yorkshire, my 57th, The Abbey Trail.

This runs for 116 miles from  Kirkstall Abbey to Whitby taking in seven historic buildings at Kirkstall, Fountains, Byland, Rievaulx, Lastingham, Rosedale and Whitby. However, we would be completing the walk mainly in day circular walks giving a mileage of probably over 200 miles.

However, on the first section we decided to drive out to Otley, catch a bus to Kirkstall Abbey and walk back to Otley, 11 miles walking according to the guide book. After parking in the centre of Otley (£3.60 for all day and hence a lot cheaper than York at about £10) Sid the Yorkshireman used the public conveniences at 30p, which is a lot cheaper than Iceland at between £1-£2! This was quite a historic occasion for him to pay to go to the toilet!

As we left the car park we started to chatting to a very friendly elderly local who turned out to be catching the same bus and was able to act as a ‘guide’ to the area telling us of all the changes that had happened over the years. He also told us to catch the 9.31am bus as it was free for those who had bus passes (Contrast York is free after 9am). Out of 5 of us only Geordie Caz had to pay, but even that was only about £3, again a lot cheaper than York especially as the journey was to take 50 minutes!

The elderly gentleman kindly told us where to get off the bus and we posed at the impressive start of the walk in exceptionally good warm autumn weather. 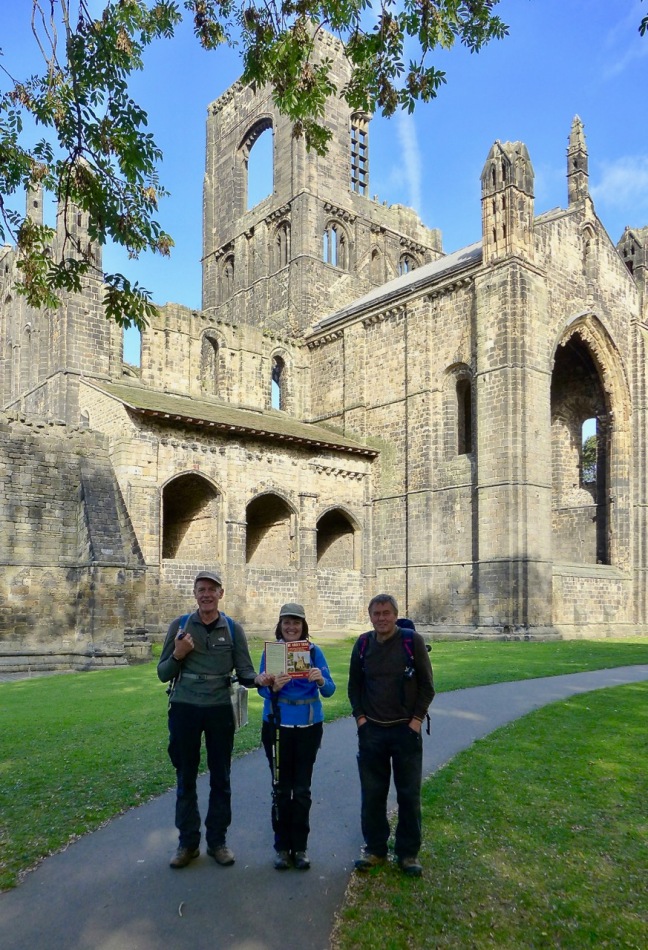 The walls of the abbey are more complete than those of any other Cistercian abbey in England. 13 monks and 10 lay brothers from Fountains Abbey established the abbey on 19 May 1152. The monks grew rich through the keeping of sheep and the wool trade. The Abbey was surrendered to the Crown on 22nd November 1539. 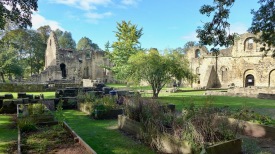 The strange thing was that although we had had lived within about an hours drive of the abbey for over 30 years, it was the first time some of us had been, although we had often seen it from the train.

We then followed the River Aire to the Leeds-Liverpool Canal and past some student residences (formerly the Mackeson Brewery). A sign says Liverpool is 124 miles and by coincidence I had only recently been there.  Horse drawn barges would have made the journey at a much slower pace than the train I had caught to Liverpool. 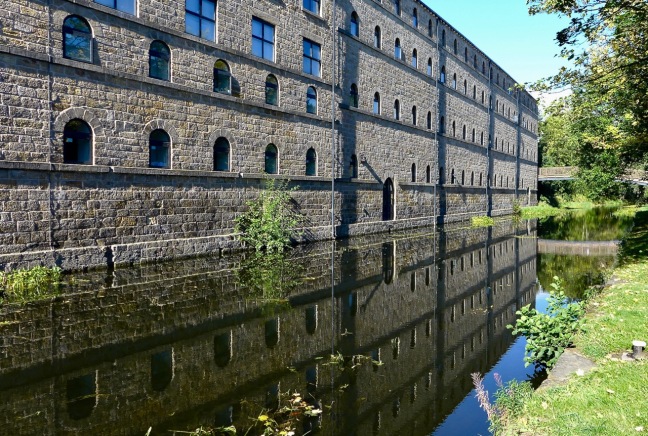 There are some impressive locks on the canal, making a good stop for our coffee and banana break. 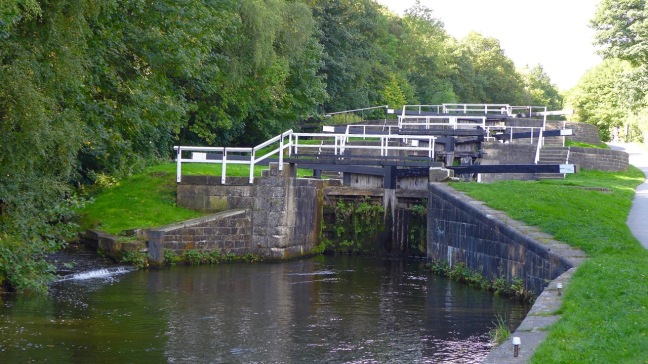 We followed the canal for a few miles to Rodley where we left it.

After passing the Railway Pub and a large packhorse bridge, which has grooves from cartwheels, we reached and followed the River Aire.

The river bank was being repaired by Leeds City Council staff and volunteers. We found the repairs made a good back rest for our lunch in the sun. They were doing a splendid job of keeping the path open.

Here we left the river and started heading north towards and through Guiseley. It was bear country.

We passed the imposing St. Oswald’s Church, which was originally built in 1150, being rebuilt in the 13th-century. 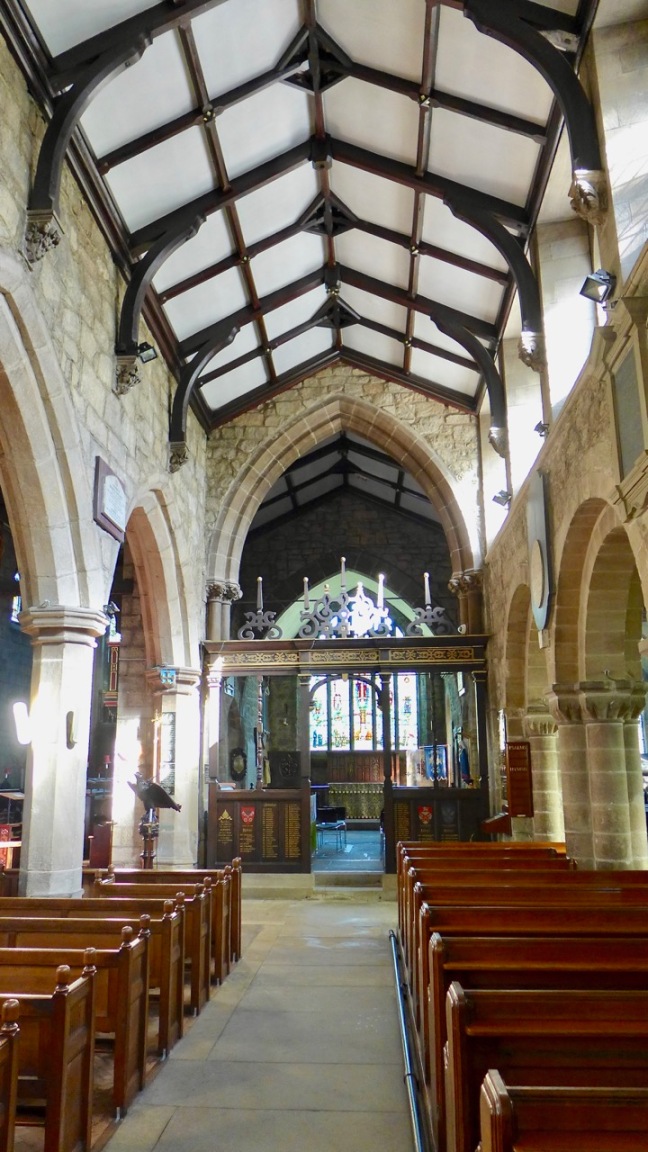 Continuing north we passed through Greenbottom and under the flight path for Leeds-Bradford airport. We eventually reached Chevin Forest Park.

Surprise View can be found here with fabulous views below towards Otley and Wharfedale.

All that remained now was a steep descent into Otley and a chance to put the feet up. 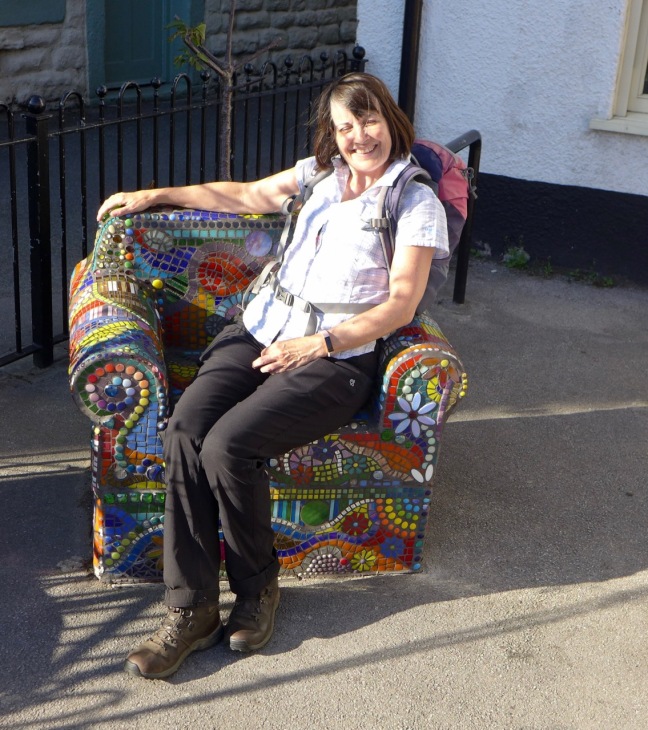 Otley is quite a cycling area and this area, centred on Harrogate, will host the World Cycling Championships in September 2019. 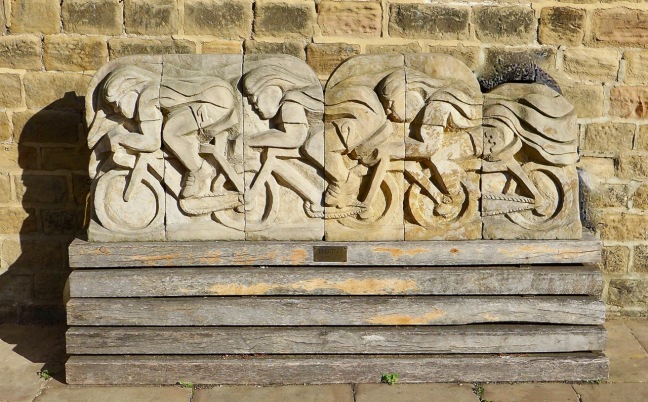 The jokes on the walk were as bad as ever. When we passed an old asylum now an upmarket housing estate, Sid the Yorkshireman said you would have to be mad to live there. When we approached the Abbey on the bus the elderly gentlemen said you go up at the cemetery. Sid the Yorkshireman quipped “I thought I would not be going up today”.