Having reached my 66th birthday yesterday so that I am now 66 living on route 66 (cycle route through my village), I received a number of birthday cards which appeared to hint that maybe it was time to ease up on serious walking and retire to easier walking involving wine, tea shops, pubs and even a wheelbarrow?

A couple of days earlier Carol and Sid the Yorkshireman had struggled in deep snow up to Carol’s knees and, when avoiding a car on an icy road, she had jumped into the hedge only to find a twig poke into her eye and removed her contact lens. After a trip to the optician at Boots her eye was given the all clear.

The forecast was for good weather, but we thought the snow might still be deep on the North York Moors making continuing the next uneven and hilly section of The Inn Way difficult. We therefore had a plan B (always a good idea) to walk on the Rosedale old railway trackbed, which at least should be flat. The line was opened opened on 27th March 1871 to service the ironstone mining. During a severe winter of 1916/17 the line was blocked for five weeks by snow. Because of increased costs and a falling price in the value of iron, the mines were closed in 1925, but operations continued for a few years extracting valuable calcine dust from the slag heaps. Goods traffic on the line finally ceased in 1929.

We passed through Hutton le Hole and the side roads were not brilliant, such that without winter tyres we would have got stuck in the toilet car park! That would not have been a good start.

We continued on the main road to pass Farndale, which confirmed there was still a lot of snow about. The views were gorgeous.

We arrived at our starting point for the revised walk at the car park at the Lion Inn, Blakey, which was a little snowed under.

I decided to put sun tan on as, even in winter, protection against the sun is advised (e.g. NHS Direct). There weren’t many coast to coast campers, despite this being on Wainwright’s Coast to Coast route!  There was no accommodation at the pub when his book was first published in 1972, but coast to coasters have since contributed to the success of the pub in more recent years.

We dropped steeply down to the dismantled railway in quite deep snow. 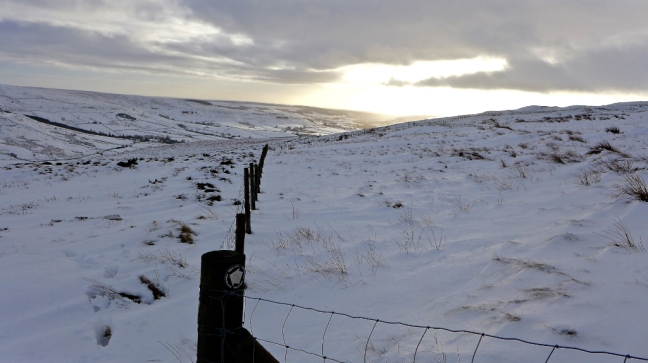 The sheep thought us a little eccentric, but then they just followed each other like sheep.

We then picked up the railway trackbed. 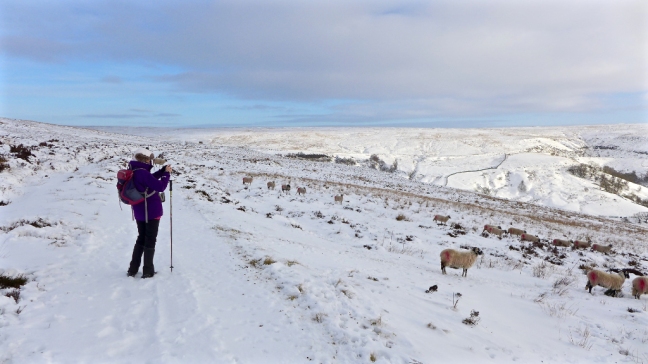 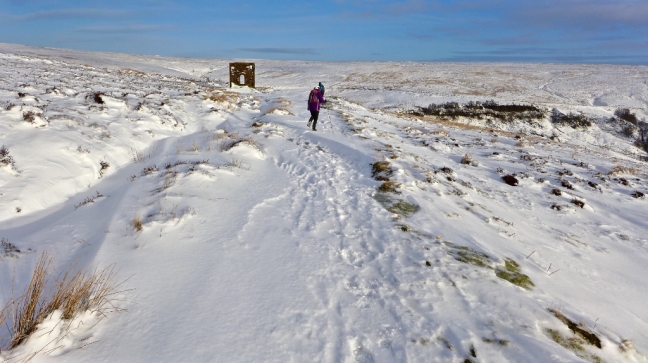 The wind had created some wonderful snow effects. 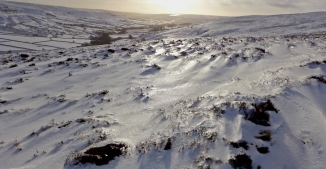 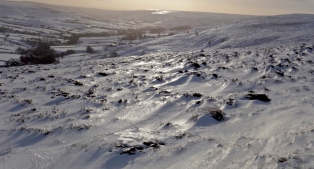 There are few buildings in the area! 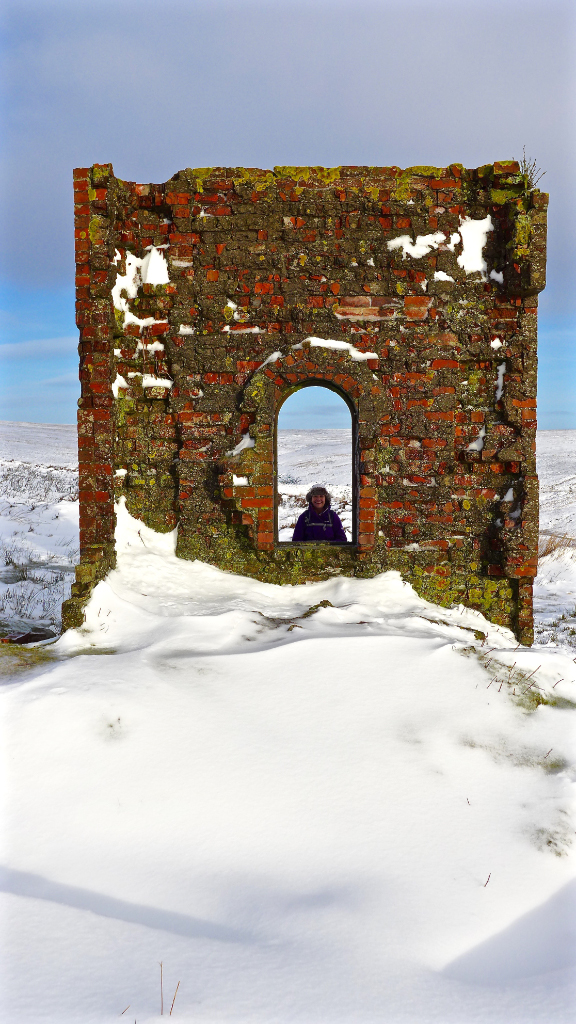 Sections of the route were not as flat as we anticipated as some of the track bed is silted up and now bog and marshland.

I tended to drop well behind Carol and Sid the Yorkshireman as there were so many photographic opportunities. You can just see them in the distance! The bend of the former railway track is evident too.

The bonus for me was that I could use their footprints in the snow to lessen my efforts. 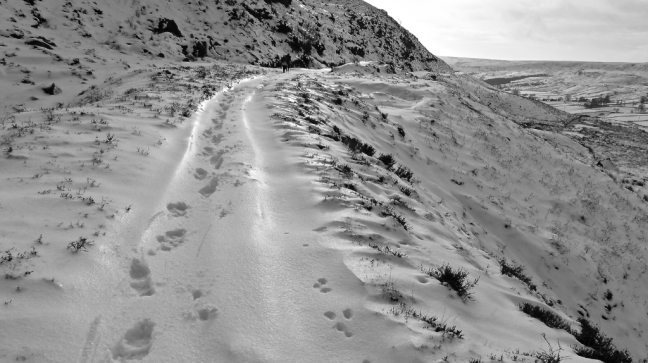 The sun was out and with our efforts we didn’t feel cold.

We started to think about a banana and coffee break. 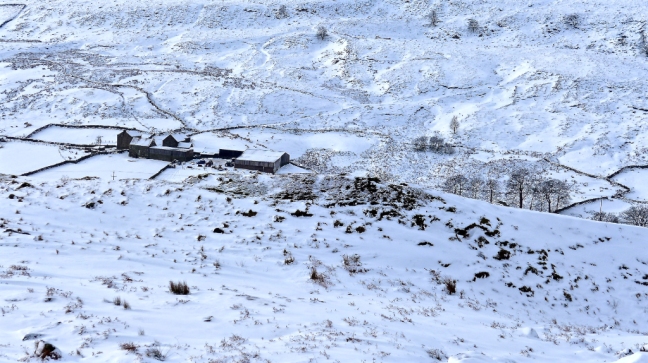 At last we found a coffee break location with a fantastic view along the valley.

Clouds were starting to appear and we were finding ‘Snow Miles’ were about twice as tiring as walking ‘Ordinary Miles’. We decided to return the way we had come back to the pub as it meant we could use our tracks to ease our efforts. It would have been dangerous and almost impossible to try and find paths to descend and ascend the valley back to the pub. They were covered in snow.

There were some interesting animal or bird marks in the snow. We had only seen a rabbit and grouse and the feathers of a bird that had been the prey of something. 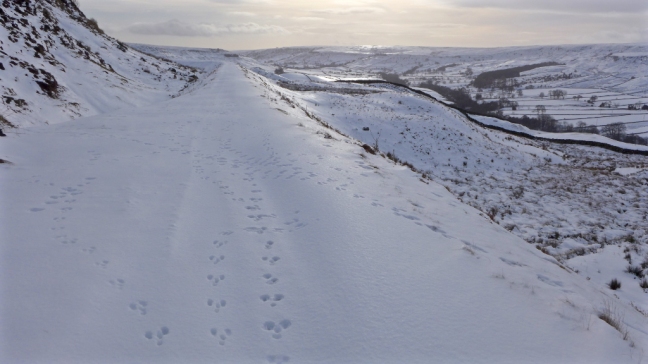 We had brought our packed lunch and so as to admire the fantastic views further we stopped again at the only building on the route. It clouded over further, the wind got up and there was a definite change and chill in the air. We did not linger having had the best of the day.

We continued along the short climb to the pub for a coffee for me (the driver), tea for Carol and a whisky for Sid the Yorkshireman.

We arrived at the pub to a warming fire.

As for taking it easier as friends had hinted on my birthday, we did at least go to the pub, whereas normally on our walks we don’t have time!

2 thoughts on “Birthday Hints? The Inn Way is Postponed due to the ‘Wrong Sort of Snow’ – Too Deep, Sun Tan and Snow, Snow Miles.”