This section of The Inn Way was one of the trickiest to plan as it was on some of the remotest, exposed and boggiest sections of the North York Moors and the forecast was was for ice, high winds and snow later on.  Some weather warnings had been issued for later on.

We decided that the snow was unlikely to arrive until after 2pm and with an early start we had a 10-11 mile route planned, which should enable us to get round before the worst of the weather arrived. We would make a final decision as to whether to walk depending on how we found the weather on arrival

After passing the Lion Inn, Blakey we turned right along an icy road to the car park with the Millennium Stone, which is shown on later ordnance survey maps.

It was sunny but very cold when we arrived at the car park. However, there were no snow clouds in sight. So the walk was on.

Our first section was on part of the Lyke Wake Walk, which can be difficult and tiring walking even in summer. In winter it not recommend and should only be taken by experienced walkers who know the area and challenges ahead.  In this photograph it seems to prove the planet is round as the circumference of the planet seems apparent in the distance, or is it the shape of the Moors? We could have been on a different planet compared to when we left home.

In his book Some Reminiscences and Folk Lore of Danby Parish and District (first published in 1953 and again in 1990) Joseph Ford says:

In travelling over our moorlands, one must keep in mind the danger of walking unsuspectedly into one of the many bogs, for, like quicksands, once a traveller gets too far in there is no retracing, and if there is no one to reach out a rescuing hand he is likely to share the fate of many poor sheep and other animals that have been submerged in the bog and never seen or heard of again. The horror of the thought is sufficiently strong in the minds of our Dalesfolk to cause them to give these bogs a wide birth.

Many of the boggy areas were iced over, but of course I found the one bog that cracked under my weight (despite having lost 10lbs since October in training for the Bavarian Alps!). My front leg immediately sunk into an abyss up to my knee. However, experience told me to immediately and without hesitation to sit down to even out the weight. This stopped the descent to oblivion and with the other leg still on firm ground I managed to pull my forward leg out, although with considerable suction resisting me.

Sid the Yorkshireman’s reaction was “…quick where’s the camera. And that is even with microspikes on”. I suspect the weight of microspikes would have quickened my descent into oblivion and a helping hand would have been more useful than a camera!

Somewhat distracted by this, my 1991 hat on top of my balaclava came off without me noticing. About a mile on I realised I had lost it then Sid the Yorkshireman revealed he had luckily found it and held onto it!

A tricky tiring 3 miles or so followed of dodging water, ice, bogs and overgrown heather. At times we could have been on a different planet.

We eventually arrived at Shunner Howe, a likely tumulus, where we stopped for a banana and coffee break whilst trying to keep out of the keen, cold wind. We were smiling again! 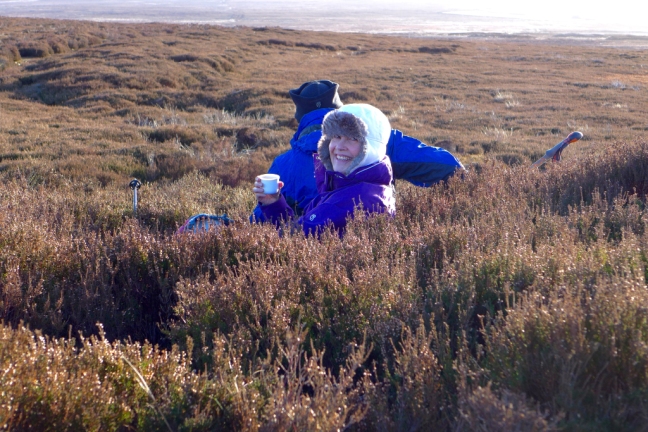 Reminder to myself: if Sid the Yorkshireman suggests again using the Lyke Wake Walk in winter for any walk, ignore him.

We eventually arrived at an the icy lane and what used to be the site of Hamer House, which use to be a pub

Joseph Ford recalls ‘how old people – natives of the dales- could relate how a neighbour’s sheepdog found, after a severe snowstorm, the decaying body of this or that old man, who had perished in the snow at Wintergill (where we were heading to!); or the finding of an old man’s bleached bones near to Bluewath Beck, not far from an ancient sheepfold, where sheep were washed in hot days in summer.

This old man used to travel these moors from one place to another to sell bottle corks, which he disposed of to the farmer’s wives, and his chief customers, the wayside innkeepers. Often he would call at Hamer, where he was unusually sure of a small business transaction with Joseph’s mother, which is how Joseph came to know him. His skeleton body was identified by the scattered bottle corks lying nearby, and the basket in which he carried them, which was beginning to decay. It is just possible he was on his way to make this small transaction – as Hamer was not far away – when the snowstorm overtook him.

Then there is the story of a man in his prime, travelling from Glaisdale to Hamer who – soon after he left the precincts of the dale to cross the moor by way of Wintergill – was caught in a blinding snowstorm. He could not see his way before him, and very soon the moorland track was hidden beneath the snow. What could he do? Amid the seething, hissing whirlwind of blinding snow? He took his hazardous bearings from the fury of the wind beating upon his face and set a course and steered by it accordingly.

…all but defeated he reached the old Wayside Inn, HAMER…they had to melt the clogged icicles from the snow-mans’s face.

His children at the pub hadn’t recognised him!

Not wanting to risk waiting for the snow to arrive, we pressed on along the icy lane, passing a bridge that had clearly had a car slide into it on the ice.

Turning off the lane at Wintergill there was surreal moment as I answered a call of nature just as a jet buzzed over us, no doubt to record on some RAF camera my indisposed situation! I still managed a one handed photograph or two! 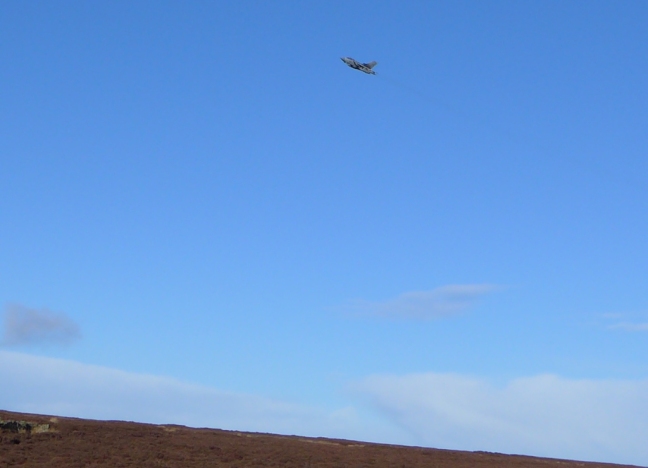 Zeppelins were reported as flying over the Moors before 1917. In 1916 high explosive bombs were dropped by the Germans, resulting in 40 or so basin-shaped holes in the ridge dividing Fryup Dale from Danby Dale.

There are some signs of previous habitation at Wintergill.

We soon began our descent into Glaisdale and what a fabulous descent with fabulous views it was, making all the hard work and encounter of the bogs of the Lyke Wake Walk worthwhile. The area reminds me very much of the Yorkshire Dales.

We passed the door to nowhere!

Then we stopped for an early lunch at about midday on a 2016 bench in excellent condition and location in the sun.

Starting our next ascent I noticed how even in winter there are lovely colours to be found and seen.

Next stop were the remains of a building, which suggested folks were a bit shorter than me in the past.

Carol had to hug this lovely tree. 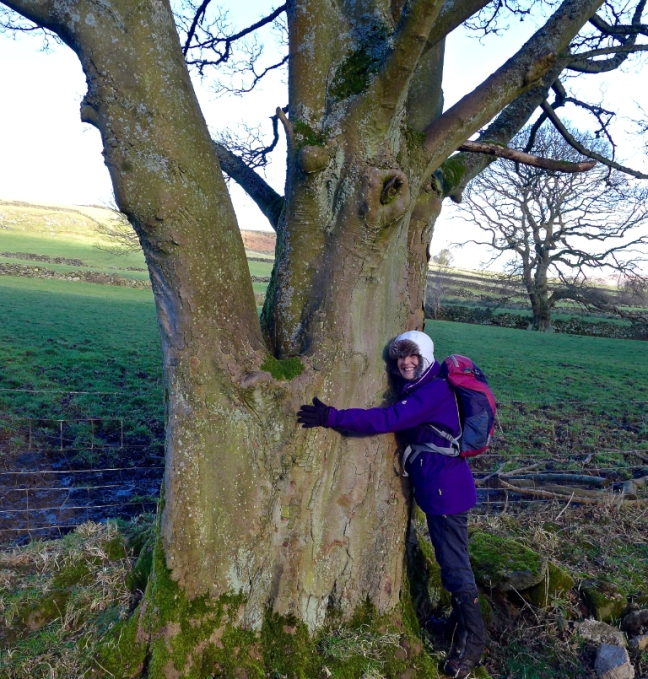 There was the final big ascent of the day to Hart’s Leap, where we got to on our previous walk and where a stag was recorded as having leapt over 40 feet! (see previous blog) 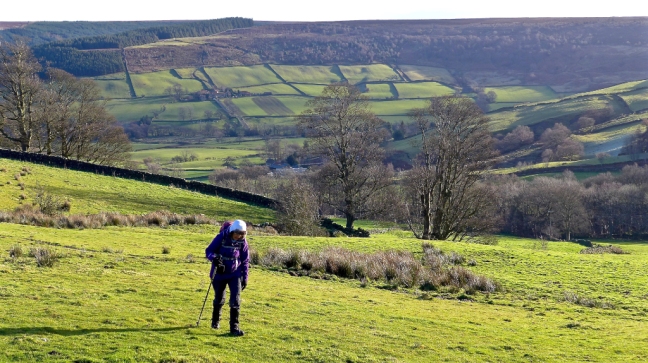 We were now on Glaisdale Rigg and a section of Wainwright’s Coast to Coast Walk.

Great Fryup Dale was to our right. Note the clouds forming, which made us press on due to the risk of snow.

To our left were fine views along Glaisdale to the sea.

We left the tarmac lane continuing along the coast to coast route towards the George Gap Causeway.

At the head of Great Fryup Dale there were ‘lunar’ looking remains of what I think are glacial deposits known as Drumlins and some subsidence. Boulder-clay may have been deposited as swarms of rounded hummocks. Clay is found in the area as roof tiles on some of the houses were made of clay and there is more than one Red House in the area. One of my favourite books of all time is Principles of Physical Geography by F.J. Monkhouse. I selected it as an O-level prize ready for when I did A-level Geography. It worked as I got an A at A-level. I think I was a school swot but loved Geography and still use the book. There may also be evidence of ironstone mine workings that took place in this area many years ago. 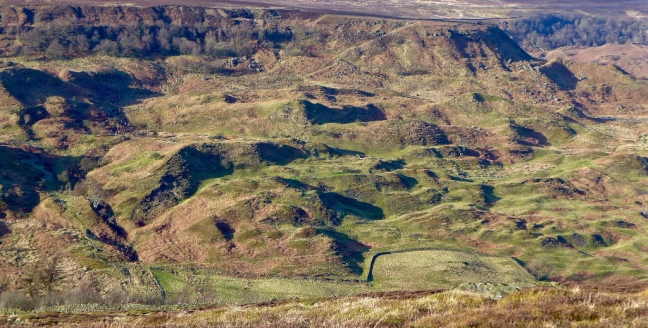 At this point Sid the Yorkshireman was powering on along the clear track, but suddenly ‘turned off’ it and seemed to fall quickly. He didn’t appear for some time and I assumed he had suffered a bad fall. Indeed he had!

He had turned off the track to go to the bog (sorry, slang for toilet) and had landed into a bog! I was just a little late in getting the camera out to capture him emerging with wet trousers. We are not sure whether he had aimed badly or whether his trousers were wet due to the bog!

A bog within a bog!

Joseph says in his book: During recent years the late Lord Downe has done a great deal to lessen these dangers (of bogs) by cutting trenches to drain away the water which feeds the bogs, but there are some of such vast dimensions that they defy ordinary measures, and George Gap Spa is one of them.

It has been responsible for the death of innumerable sheep that have strayed too far over the edge, or been frightened and chased over the edge by stray dogs. Many a lost traveller on these lonely moorlands will have found his burial place in this bog, in company with other ill-fated men of the Stone and Bronze ages, whose bones have long mingled with the antler of the stag, the tusk of the wild boar and the bones of sheep and cattle, to lie rotting in the maw of of the great bog of Fryup.

The good news is that despite having my 3 hats somewhat misaligned, I didn’t end up in Sid’s bog. The moral of the story is that you should choose carefully where you go to the bog!

All that remained now was to progress another mile or two over more boggy land and then follow the lane for a mile or so back to the car.

Rosedale Topping can just be spotted in the far distance to the left of the Millennium Stone. The snow clouds were gathering and it was time to head off home

A challenging, fabulous walk and possibly the hardest circular section of The Inn Way completed, although we had only actually walked about 3 miles of The Inn Way!