I was hanging on the end of a rope at the age of 17 on Idwal Slabs (Cwm Idwal) near Snowdon in Wales.  My legs started to shake. I looked down and thought this was an early death that I had not intended. How had I got in this ridiculous and dangerous situation?

It all started when I was busy studying intensely for my A-levels. My brother who was a member of the Midlands based 99 Climbing Club said I ought to take a break and go to their climbers cottage (The Cottage as it was known) near the Pen-y-Gwryd Hotel.

This seemed a good idea until I found out that the only person going to the Cottage that weekend had a reputation as a somewhat daredevil, risk taking, some would say foolish driver and climber. He had a tendency to write off cars and take climbing risks and drink a lot of alcohol. The complete opposite of me at 17 or for that matter any age.

However, arrangements were in place and I couldn’t back out.

So a little restful walk in the countryside for him was not on the cards and he suggested we go and climb Idwal Slabs. I tried to make excuses such as I had no proper climbing boots and no proper clothes. In those days this was not uncommon. As far as he was concerned I had a pair of tennis shoes and they would give good grip on rock. Neither did he accept that I had, not so long ago torn a crucial ligament, playing tennis and therefore was not that fit.

Now you may ask why I am bringing this up some 48 years later. I had in fact erased most of the terror from my memory.

It was brought back when I went to the ‘Yorkshire Post literary Lunch with Sir Chris Bonington’, in my view probably one of the best UK climbers and expedition leaders ever and certainly one of the most famous. 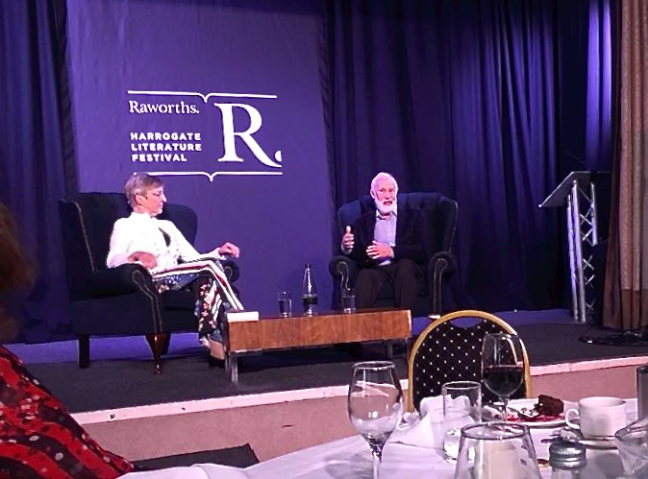 Why do climbers take such risks and accept sometimes very poor odds on the most dangerous mountains? I have been fascinated by the dangerous situations they put themselves into; sometimes losing their climbing partners and friends to the mountains. They can suffer frostbite, broken limbs, economic uncertainty, long periods in unimaginable cold, narrow and lucky escapes from death, long periods away from loved ones as well as competitive and difficult disputes within the climbing teams.

I think it is the wrong question to ask. The question is that given their enthusiasm and love of climbing, how can they not climb? Also given that many are driven and ambitious individuals it is inevitable they will live on the edge and push themselves to take risks.

Even after many years of climbing Sir Chris Bonington says in his new autobiography ‘I can offer no justification for the risks’.

At the lunch I was of course delighted to meet Chris, whose climbing career I have followed for years, and purchase a signed copy of his new book Ascent. I noticed there was another older book of his on sale, I Chose to Climb.

A bit like Touching the Void by Joe Simpson (in some ways the best book I have ever read)  I knew Ascent would be a book I would find difficult to put down.

I was somewhat surprised on page 34 to read that in the New Year of 1952, the year I was born and when Chris must have been about 17 and a novice climber (he was born 6 August 1934), he set out to the shores of Lyn Idwal where he stopped to examine the Idwal Slabs. He felt is was a relatively easy-angled sweep of rocks that was obviously climbed as there were lines of scratched footholds snaking up the cliff, made by boot-nails. He scrambled/climbed up solo hardly noticing the drop below him, until he reached a ledge stretching across the top of the slab.

He says ‘he felt a moment of elation and then wondered how the hell he was going to get down.’

There was no obvious way off up or down. That was exactly how I felt but at least I had an experienced climber above me who I was attached to by a rope.

The re-assuring thing I find after 48 years is that, like me, Chris experienced fear.

In the end he decided to retreat down the way he had come up and was much more aware of the drop below. When he reached the bottom he said ‘I felt the weight of fear lift with a huge sense of relief.’

However, that did not deter him from climbing back up with an experienced climber the same day to link three routes Faith, Hope and Charity. His climbing career had truly begun and the rest is history as they say.

Meanwhile, I was still stuck on a little ledge and felt I couldn’t move. My legs were shaking and I was getting more and more tired. My climbing companion above me was shouting instructions to lift one of my legs up high to a foothold. I think I eventually shouted ‘climbing’ after deciding I couldn’t stay there forever and there was a tug on the rope and I think I was pulled up rather than climbed up. Either way we reached the top and the escape route from the face. So I could argue that I had conquered a route that Chris Bonington hadn’t but, given there are a lot of different routes, this was not the case.

In any event this was the first and last time I was to climb with a rope and the nearest I got to real danger in the many years since of fell walking and long-distance walking.  My highest risk was going over Striding Edge with a large pack after snow and after someone had died up there the previous week.

So as with Chris Bonington, for me the rest is history but either way Idwal Slabs was to have a profound effect on both of our lives and the directions we went in.  ‘I Chose not to Climb’ and you can read what I did instead in these Secret Diaries of a Long-distance Walker.

When I said to Chris that I was pleased to hear that he had taken up and was enjoying walking, he did say that climbers do walk. I agreed but said that many walkers, including myself, don’t climb. However, I remain fascinated as to the challenges climbers undertake and the risks they are prepared to accept.

His new book is an excellent and gripping read.