Post 203: An Undercover Operation and Walk to find the MK2 Spitfire.

Leaving York just after dawn with Sid the Yorkshireman and Carol the plan was that they would parachute me into Pickering Station from their Kia Sportage (they have a high frame) before anyone was properly awake. They would then go and do a walk around Lastingham as a decoy and then pick me up at the end of the day after the operation. It was felt that a sole agent would stand a better chance of getting through enemy lines, particularly around the occupied French village of Le Visham.

Waiting for the train there were one or two distractions. This is a common tactic used by the enemy and wouldn’t work on me. 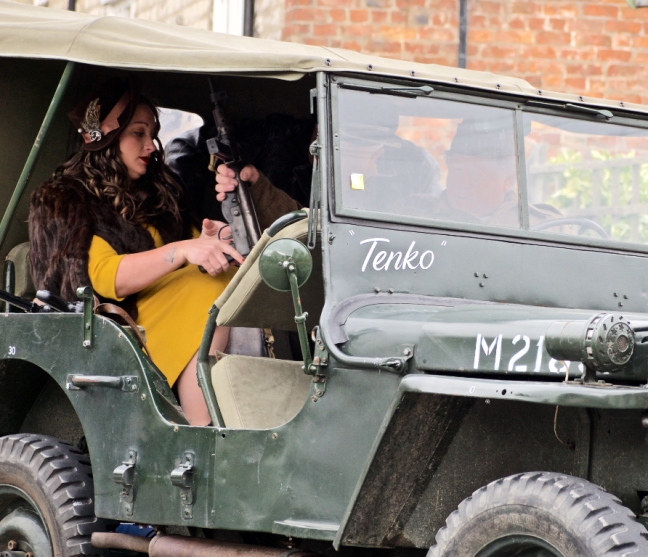 There were also an increasing number of soldiers appearing.

I had no trouble getting my ticket for the train and no identity papers were asked for, but I did have trouble catching the first train missing it by 2 seconds. As I bought the ticket the whistle to leave went. All top agents, even James Bond have mishaps and so, although a set back, it wasn’t a disaster.

It gave me chance to check out some of the vehicles in the area. There were many. 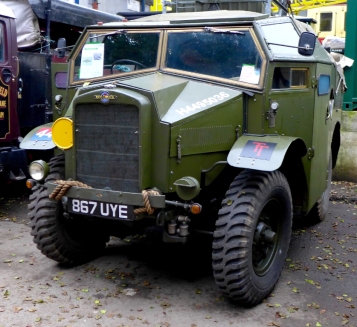 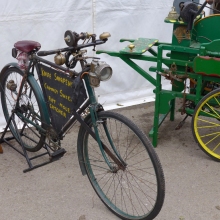 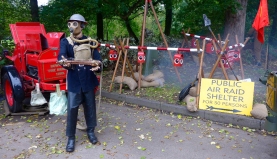 Eventually my steam train left, although soldiers were everywhere. It was so full I couldn’t get a seat so stood up looking out of the window. 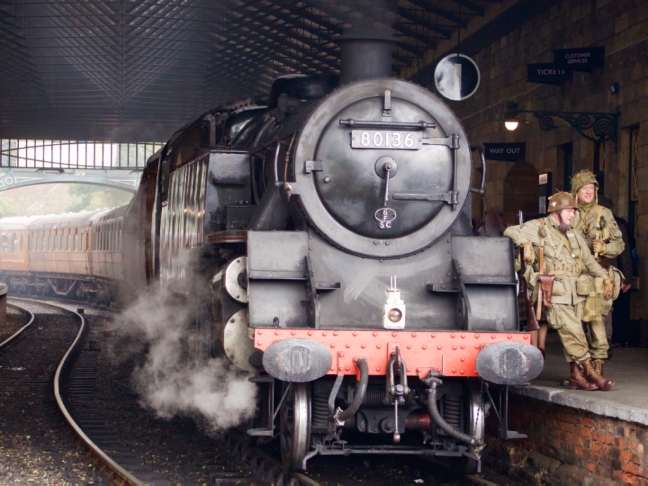 There were special sniffer dogs that even sniffed out of the window of the train!

However, I had showered in the morning and so wasn’t caught by them.

I successfully passed through the enemy occupied territory of Le Visham, 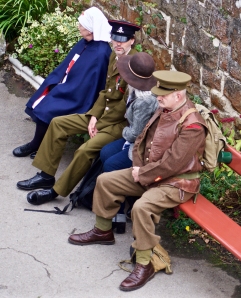 without being stopped, although some passengers had to produce identity papers.

It was getting a bit hot (summer in October), so I decided to get off the train at Goathland and walk the few miles through the North York Moors to Grosmont where the Spitfire was last reported. This would decrease the chance of being identified as an agent.

However, I felt the entertainer may have been a spy as he had his eyes on me.

Goathland seemed to be friendly territory. There were even one or two Russians about who were now on our side and the lady with the mangle would put fear into anybody. 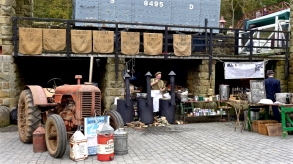 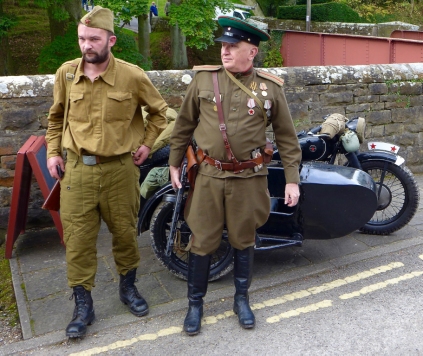 I began to relax when I found the Home Guard were around. We all know how Dad’s Army would win any battle for us. Also a car the same as the only car my Grandad ever had was in the garage – it must be friendly territory! 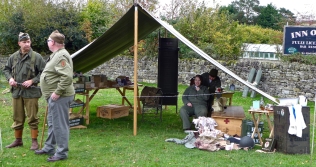 I followed the old railway incline to Beck Hole and took a path up to the current railway line to have lunch, in what is normally a secluded and quiet spot. However, for some reason a few walkers and a Ranger looking for Thomason Waterfall came along. The Ranger in particular wanted me to encourage people to go to the Whitby Museum as it is struggling financially. So do go or it will close!

I watched some trains pass.

The scenery hereabouts was stunning and there were plenty of trees I could hide in should I be detected. There was even a horse for quick getaway. Not that I have ever ridden one. 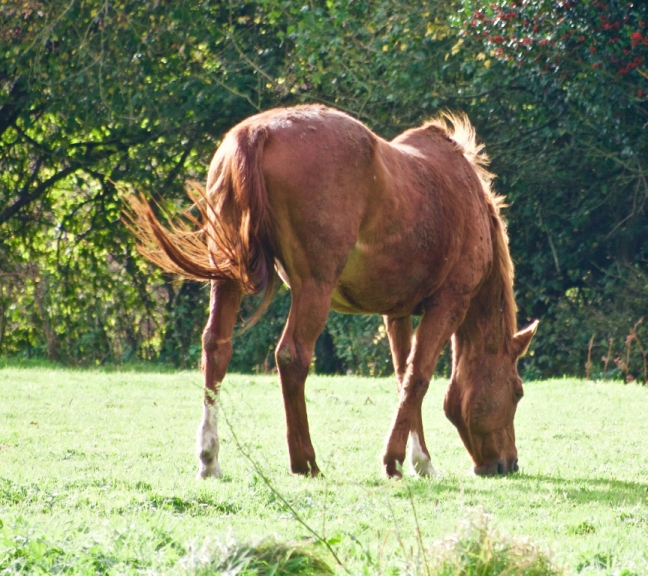 After passing the goods yard, with trains awaiting renovation, I descended to Grosmont after helping some ladies out who were lost.

The were many, many people about, but there were rumours that a Spitfire was in the car park. I wandered over and sure enough one was there in excellent condition. Mission accomplished. Had my mobile had reception, I could have phoned Sid the Yorkshireman and my task would have been completed. 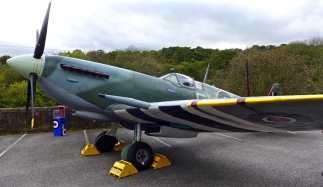 The only alternative now was to return to the pre-arranged pick up point of Pickering where they would make contact when they had finished their walk – the emergency rendezvous.

Before leaving I couldn’t help but admire another car like the only car my Grandad ever had – we called it a Stuffy Duffy.

I managed to get a seat on the train, which was absolutely packed.

Pickering was also packed and there were so many distractions with music and dancing (see videos posted separately!) that I didn’t hear Carol phone to say they were near Pickering. By the time I picked up a message from them they were in Malton.

Even one of the sniffer dogs found it all too much.

Folks were waiting for the night safe to be blown.

Carol had already told me what a delicious meal they had eaten in Lastingham, but it was rations for me now. A pasty and a cake.

I came across a car that I think was the bigger version of my Dad’s car when I was a child. His was a Triumph Mayflower. Like my Dad’s car, the gear change was on the steering wheel.

There were still military vehicles about, so I was still not safe.

How to get home?  There was only one way – the Coastliner. 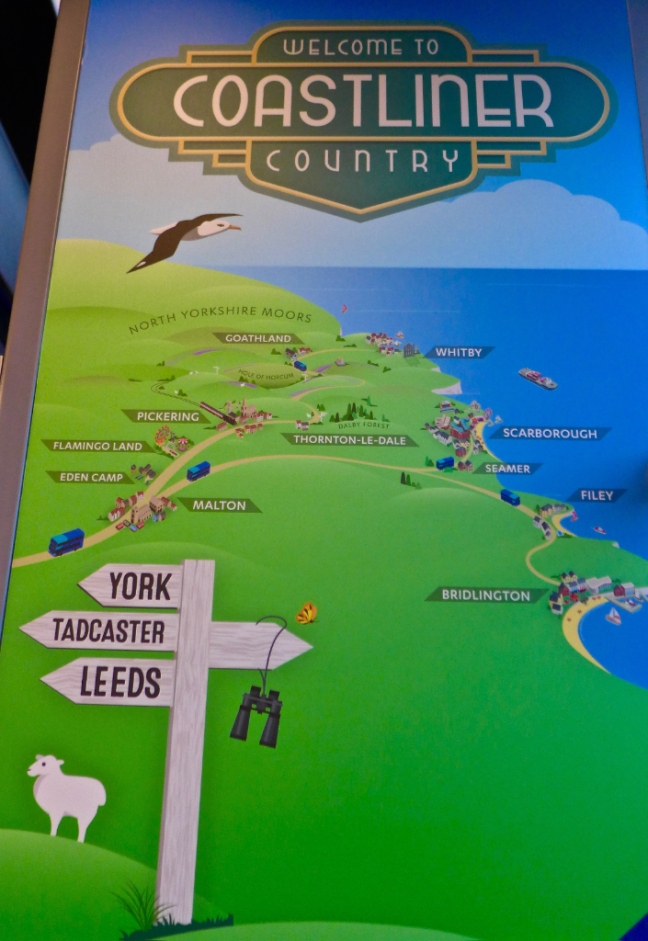 I got a seat but was then tortured, presumably by the enemy, to try and get some information as to what I had been up to. A lady on the bus talked with a high shrill voice non stop for nearly two hours!

Only when I got to York and caught my second bus with 2 minutes to spare did I escape the torture.

I now know what it must be like for soldiers who arrive home after, torture, danger, rationing and distractions to find there is no welcome home and the wife is not due back until the next day. It’s tough being an agent.