We arrived at Snape village hall and parked up at about 9.00am. We were following my North of England Way to Lockton and then would largely follow the Tabular Hills Walk back to Snape.

We soon passed a wind chime bell and wondered what it was doing in such a remote place. 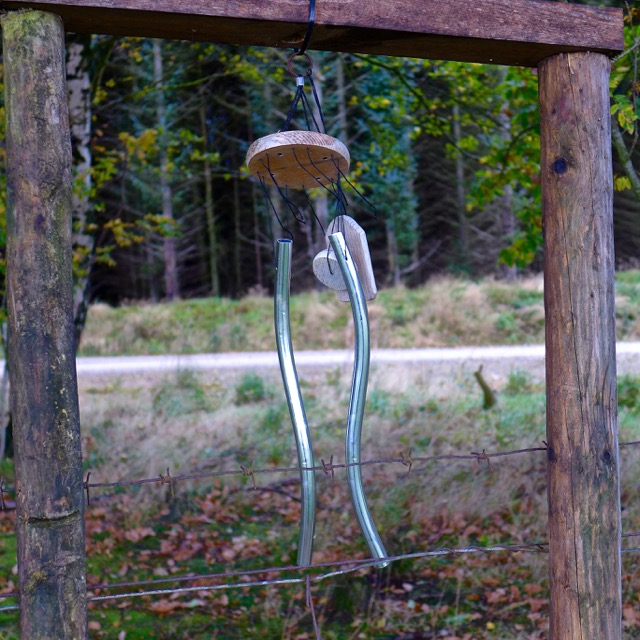 It was soon clear that there had been a lot of rain in the past few days and it was very wet underfoot, making it quite slippy and muddy. However, we had our ‘winter treads’ on. The path to and past Middle Farm was meant to be on the Moor to Sea cycle route but you would need to be a pretty good and fit mountain biker to follow it! It was hard enough walking over it.

We came across tinder fungi. They were some of the largest I had ever seen.

We crossed over the stream of Raygate Slack and eventually emerged above Newtondale. The Newtondale Gorge was was created by a glacier draining from the Esk Valley some 10,000 years ago.

There were fine views all around.

We descended to Levisham Railway Station and stopped for a rest, banana and coffee break, whilst videoing a steam train coming into the station. On the 13/14/15 October this will become Le Visham a French station for the North York Moors War Weekend, when many people dress up in 1939-40s outfits and drive vehicles of the period. Celia is away with the car, so I have 2/3 buses to catch and then a steam train in order to attend, so it will be a bit like the 1940s for me.

A steep ascent followed and a close encounter with a herd of Highland Cattle, which were coming in the opposite direction on the lane and then our right of way path. Can’t they read? However, being friendly Yorkshire and, despite their big horns, they were quite friendly. 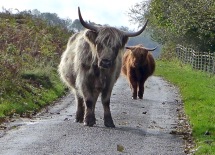 There was a mountain rescue sign and we did wonder about calling them!

As we ascended the narrow grassy path, avoiding the cattle wherever possible, there were fine views back. Note the comment in one of the videos by Sid the Yorkshireman that he didn’t fancy driving the bull past Carol and myself. I was left to film the big bull with huge horns and calves, whilst it tried to stare me out (see videos on Facebook Page comments). I may yet get a bravery award from the Queen for dedication to walk filming.

The steam from a train can just be seen amongst the green and brown tree mosaic. 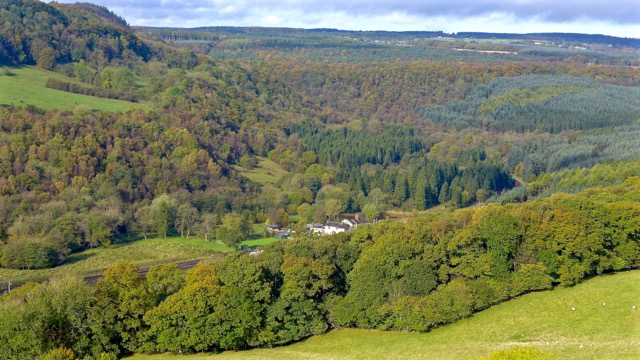 We continued to Levisham Village, which is over a mile from the station and passed the Horseshoe Inn, which does good food! 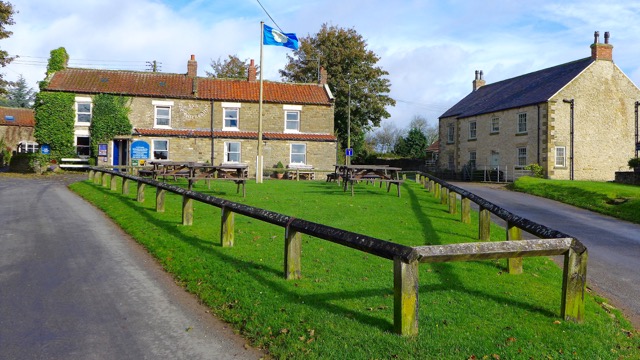 And popped into the church 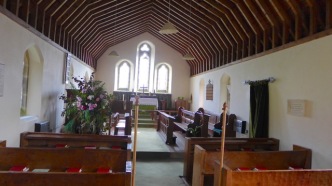 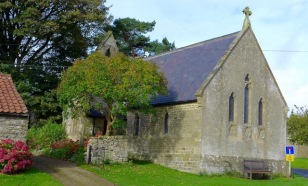 There was then a very steep descent and ascent to Lockton, past the Mill 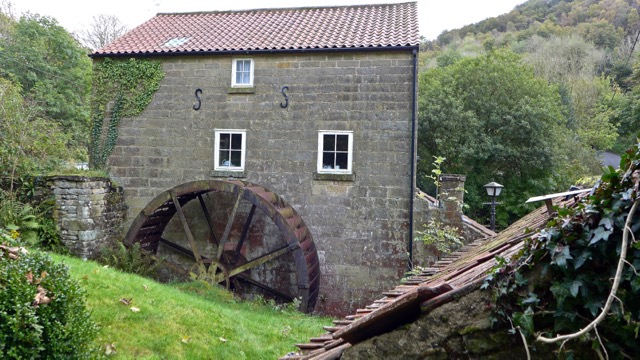 We found an ornate bench opposite an information board and had lunch.

A fox, the youth hostel and the church were then passed to where we again descended a steep and muddy hill.

As we crossed Levisham Beck and ascended the hill on the other side of the valley, we came across Byrony and Rory Hancock from Guilford, who were on holiday. Their walk guide was a bit confusing and had led them to descend the valley too early, whereas to get to the Hole of Horcum, where they were walking to, they needed to stay high for another mile or so. It so happened that we had finished my North of England Way section and so I was able to give them my book with very detailed guidance so they could complete their walk. By an even stranger coincidence the Hole of Horcum is featured on the front of the book! What a small world. Hope they enjoyed the rest of their walk. 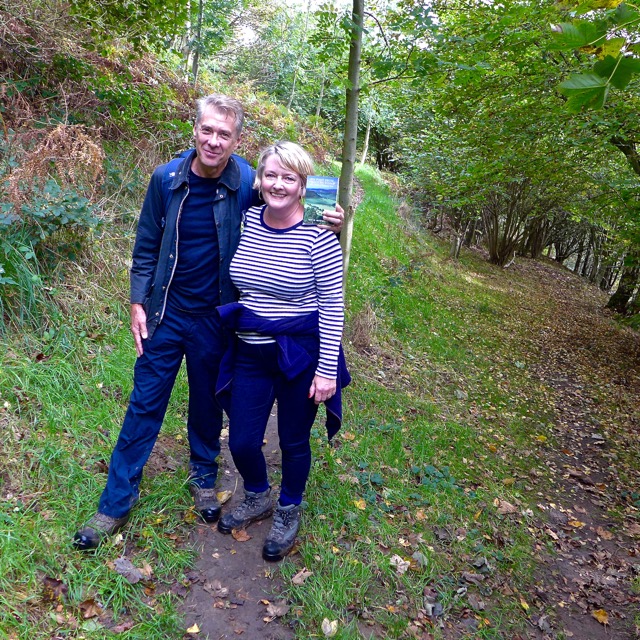 Our route took us in the opposite direction to pick up the Tabular Hills route and go past the old and redundant church. 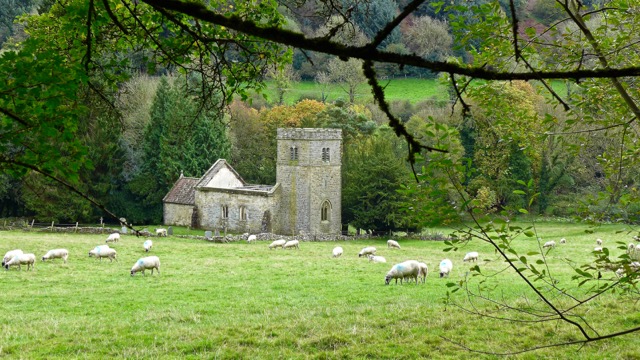 Again this was muddy, slippy and tiring but beautiful. 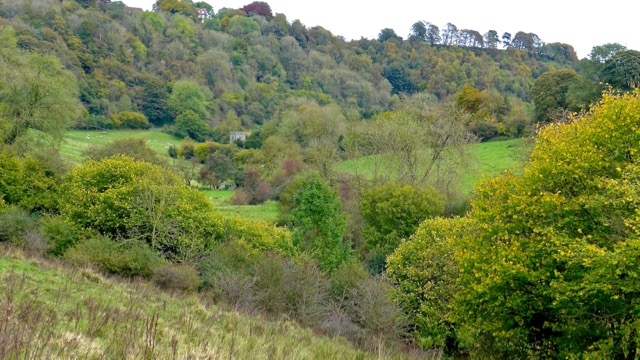 After another steep ascent we passed some a Free range area for children. 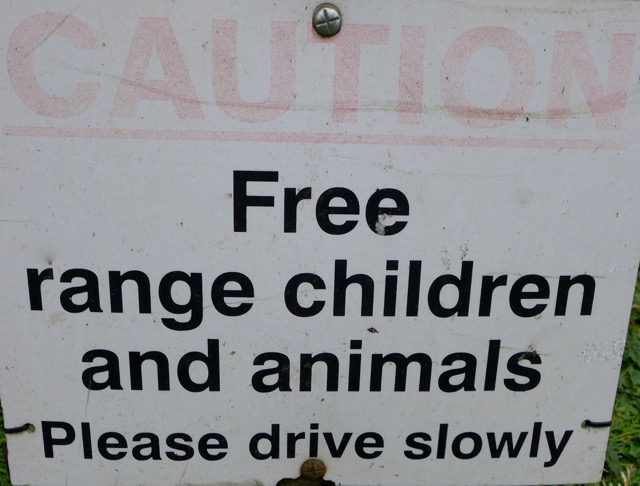 Just before Newton-upon-Rawcliffe we came across a memorial bench carved presumably by the descendants of Robert Thompson.  He was the famous mouseman of Kilburn (born 7 May 1876- died 8 December 1955) and carved a featured mouse on almost all the furniture he made. It is claimed that the mouse motif came about accidentally in 1919 following a conversation about “being as poor as a mouse”, which took place between Thompson and one of his colleagues during making of the cornice for a screen.

From the bench we watched and filmed two more trains!

After that there was some fairly routine track and lane walking back to the car.

Average Pace 19.54 (quite slow due to the conditions!)