Having left Sisimiut at 18.00 hours and reached our most northerly point, including being above the Arctic Circle, we were now heading south and were due to arrive in Kangerlussuaq at 7am.

Kangerlussuaq is the only inland town in Greenland and is located at the end of the 106 mile (170km) Kangerlussuaq fjord, which is the longest in western Greenland.  We crossed back below the Arctic Circle halfway along the fjord. There is only a population of 499 in Kangerlussuaq.

It would be necessary to tender from the ship. Due to mud flats and a low tide only 25 passengers could go in each tender as opposed to the normal 70.  However, most Britains are good at queuing, even at temperatures that turned out to be up to 22 degrees.

The big landing platform was a wreck from the military occupation of the area in the Second World War.

The ship Ocean Diamond (Quark Expeditions) was also in the fjord. It only has a tonnage of 8,282 and 207 passengers and is for discovery-minded participants who enjoy a comfortable travel environment.

As we approached the land in tender boats it occurred to me that these World War II landing craft might have been useful to increase the number of passengers that could be landed!

It also reflected how Kangerlussuaq came into being due to the war. The town was founded in 1941 when it was opened as a US Air Force Base. The Americans remained here until 1992.

There is a lot of writing on the rocks at the small dock. The earliest I could identify was 1959.

The air base briefly came under Danish control in 1950 but, following mounting concerns about the Cold War threat, a new agreement saw the U.S. re-open Bluie-West-8 under the name of Sondrestrom Air Base in 1951.

After lunch we had an excursion booked to the Russell Glacier on partially off-road 4 wheel drive adapted vehicles.

The bus was an interesting adaptation! Larger tyres? They were needed because it was a 16 mile (25km) drive along a track that in many parts was just sand. 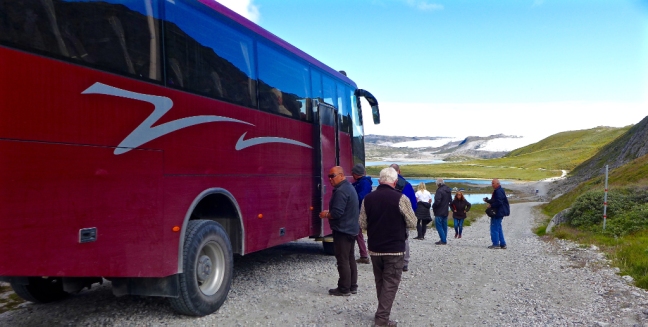 On the way out we passed a few ‘hikers’ 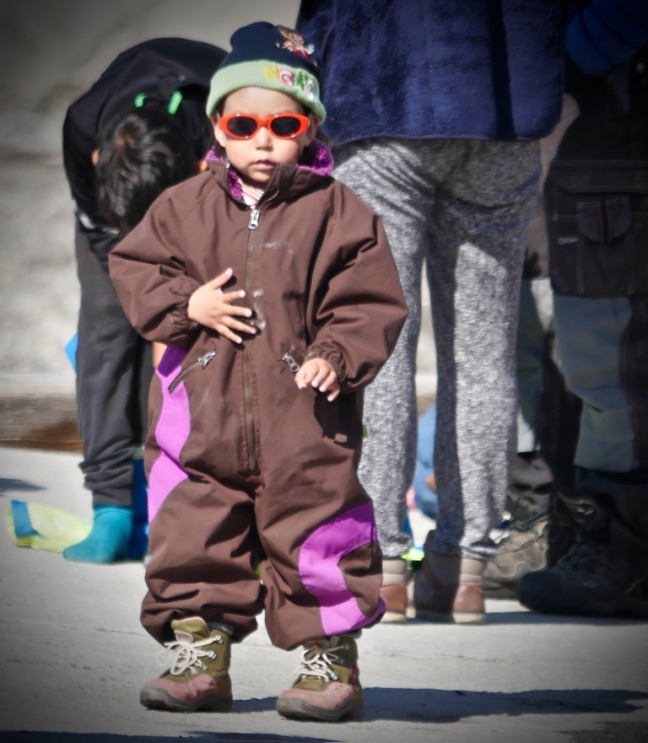 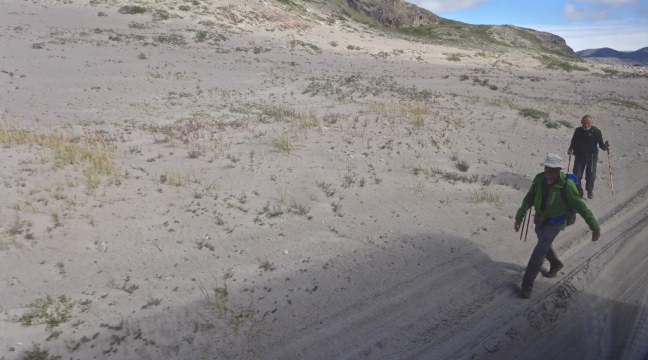 We passed some unusual rock art and trees. 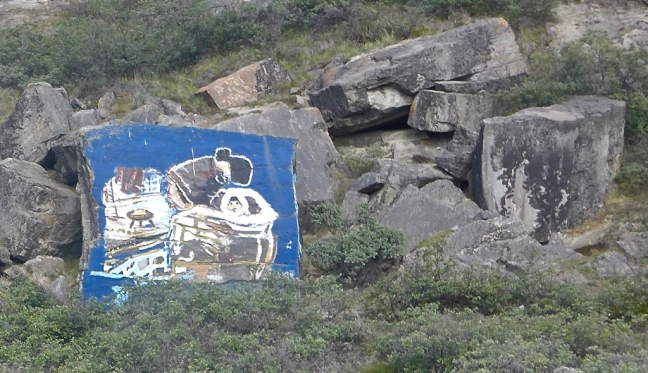 The area is home to Greenland’s most diverse fauna including muskoxen, caribou, arctic hare and gyrfalcons. From the coach we saw the first two but from a moving bumpy coach at distance they were almost impossible to photograph. The muskoxen were very large – we had earlier seen knitting yarn made from gathered muskoxen fleece for sale at £60 a ball!

We also saw the site where a Lochheed T-33 Shooting Star and two other planes had crashed in a blizzard in 1968. All pilots are believed to have ejected safely. 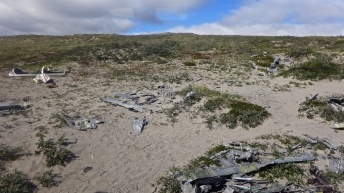 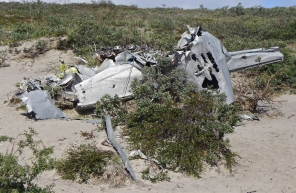 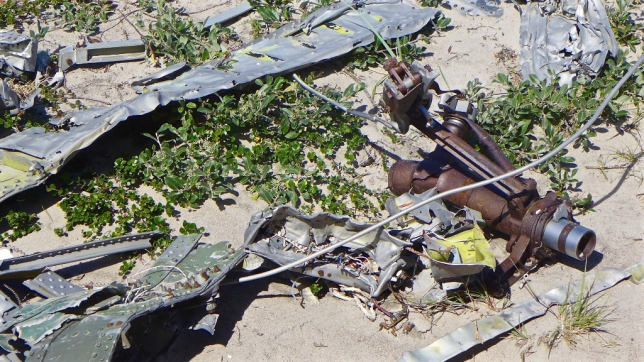 We followed the dusty track along the river Qinnguata Kuussua alluvial valley. 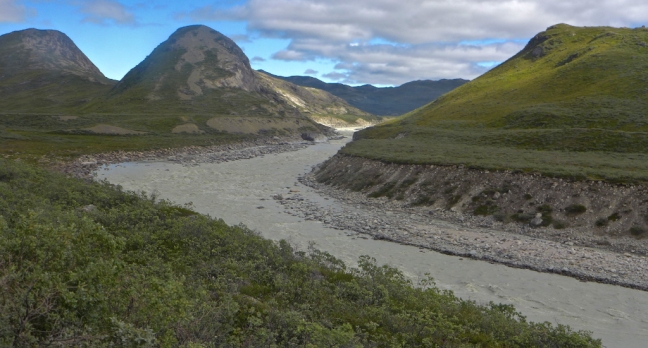 Before reaching the glacier we stopped at an incredible UNESCO World Heritage viewpoint . 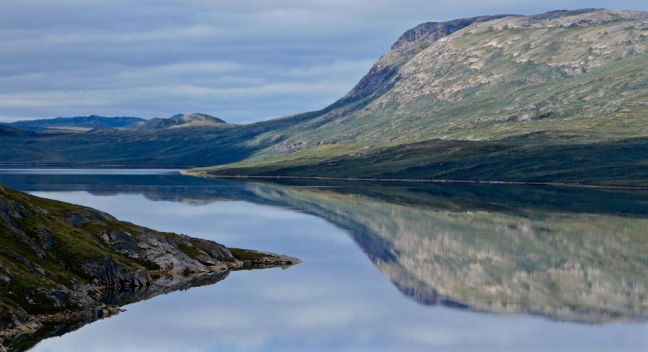 Flora was all around us. 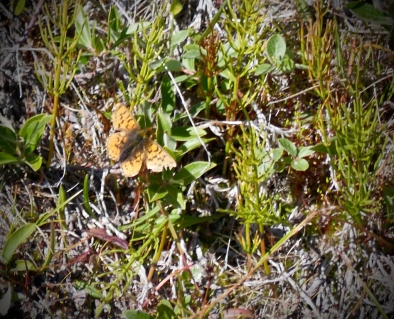 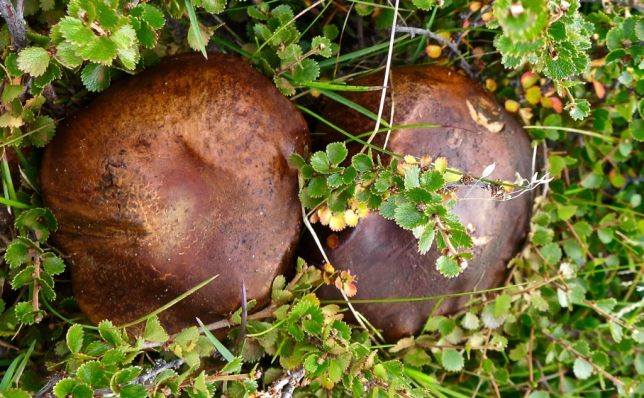 We then drove past some locals who are not allowed to hunt in this UNESCO World Heritage area, but do go further afield to hunt muskoxen and caribou.

The glacier, which descends from the ice-cap, came into view

Finally, we reached it.

It was very impressive.

The vertical walls reach as high as 131 feet (40metres)

There has been a biological darkening of glaciers due to cryoconite build-up. This is powdery windblown dust made of a combination of small rock particles, soot and bacteria. It is spread by wind and rain. It absorbs heat more quickly than white snow and ice and speeds up the melting of glaciers. Human influences such as emissions from cars, coal fired power stations and soot from fires play a part in its production as does rock particles from volcanic eruptions and mineral dust from warmer regions. 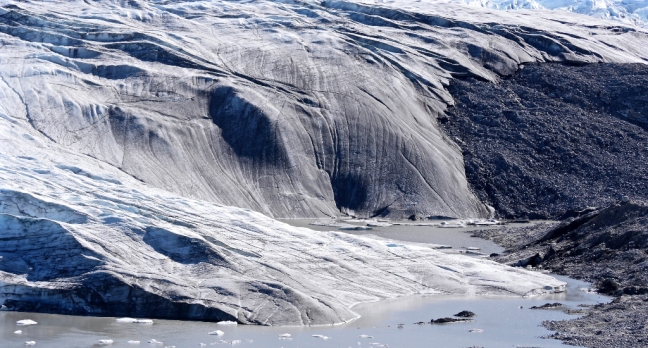 A dramatic end to a stunning day. Again the weather had been kind to us when it mattered and we felt very blessed.

It is easy to forget that the locals, who are not wealthy, have to go and hunt for their food. As we arrived back at the tender dock, a father and his son were just going hunting.

There was about an hours delay in getting some passengers back onto the tender boats and one or two passengers did complain. However, if you wish to go to these remote stunning places you must be prepared to adjust to the local conditions, tides and weather. Otherwise don’t bother!

The ship was due to depart at 16.00 hours but actually departed at 18.30pm. No problem. We were able to sunbathe on deck in Greenland – in shorts. Unbelievable! Global warming is here and now with all the implications of melting ice-caps and glaciers.