We had decided to walk the last section of the Inn Way, my 56th long-distance walk, as a linear actually using our bus passes (with the exception of Geordie Caz who is far too young to have one – there are some advantages of getting old, albeit not many) to get from Grassington to Kettlewell. We decoded the bus timetables with its various permutations:

In blue only between 7th May and 30 September, only on/in SSHs, certain buses do not stop at this bus stop, please catch the bus at the shelter (is this a World War II shelter?) etc etc.

The first bus was not until 10.15am, a bit late for us as we usually start walking by about 9-9.30am.Given that the forecast was for temperatures to be in the mid 20 degrees this had implications for later.

We arrived at the main Grassington car park and Information Centre at about 9.50am in good time, despite having to skirt around an accident a few hundred yards from home. The gents toilet were out of action, which Sid the Yorkshireman was delighted about as it saved him 20p in toilet charges. They had provided free portaloos. He even suggested Geordie Caz could use the portaloos to save 20p.  I think it is worth paying at least a 40p to avoid having to use portaloos, possibly more if I was a female.

Naively I was expecting a proper bus, but when it arrived it was a ‘volunteer’ driven bus, more like a large people carrier. There wasn’t much room for the rucksacks but we did have safety belts, unlike normal buses. We then had to wait until past 10.15am for the Skipton bus to arrive so that one person could transfer from it to our bus. A true integrated transport system.

When we did eventually get going we drove to the square in Grassington where a car and van blocked our route. There were then endless discussions between the bus driver and the drivers of the other vehicles before we could get on our way again. It was clearly going to be a novel journey. This was confirmed when a local passenger got on and discussed all the local goings on in the area. If you want to know anything about the Grassington area just catch this bus!

Eventually, we arrived at Kettlewell and started walking at 10.40am.

We were soon ascending in warm weather. ‘Mad dogs and Englishmen go out in the Midday Sun’ came to mind. However, the views were good as we headed towards Langcliffe and Conistone Moors. 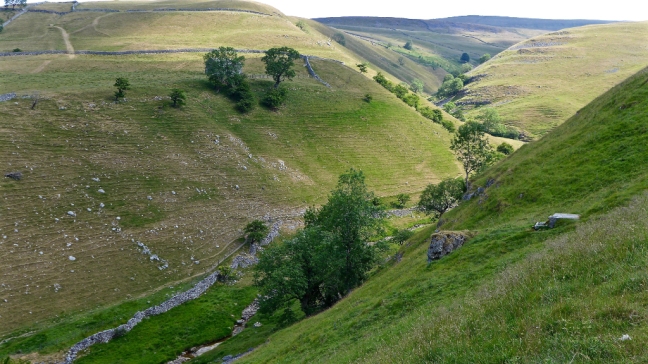 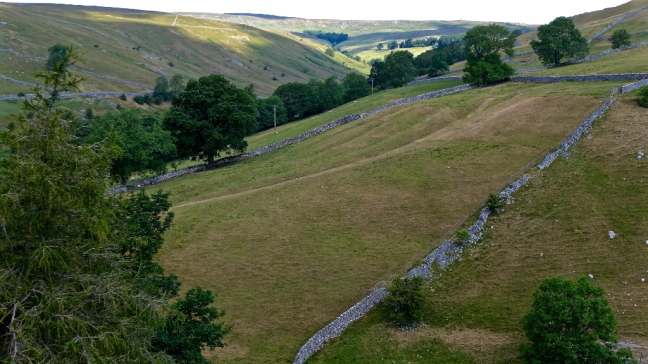 The previous day Alf had been on a walking navigation course and so we put him through the ‘Spanish Inquisition’ to see if there was anything we could learn. One thing that cropped up was how should you descend these large stiles. Facing frontwards or backwards. His course leader said facing frontwards as on turning round at the top he had seen walkers catch their rucksacks and fall off. We disagreed and thought backwards as shown by Sid the Yorkshireman below. We then discussed whether if we followed the course leaders advice and had an accident, could we sue him. However, it was decided this might not work so we decided not to sacrifice Sid the Yorkshireman.

The question then arose as to when you should have ‘elevenses’, that is the coffee and banana break, given that we had started late. By 11am I was ready as having had breakfast at about 7.00am, over 4 hours earlier I was in need of a break and food, especially given the hot weather. The others wanted to carry on and complete more mileage before having a break. With missed one good viewpoint with nice soft grass but come 11.30am I went on ‘strike’ and just halted and got my banana and coffee out and said I would catch them up. I think the clue is in the title ‘elevenses’. The others reluctantly parked up and ‘Sid the Yorkshireman’ was duly punished by having thistles stuck in his foam mat. It is a brave walker who do not comply with the Chair of the Ethics Committee wishes.

We reached Capplestone Gate at just after midday where there were fine extensive views. But it was hot, well over 20 degrees.

We descended to a fine limestone pavement.

We briefly joined the Dales Way and recognised we had come this way on the first day of the Inn Way back on 19 March 2018, when we had started the walk. 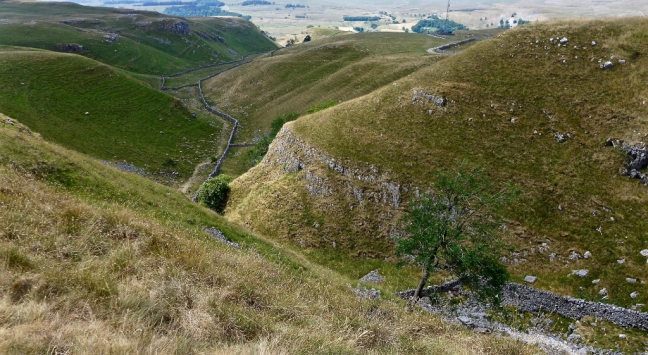 It was a bit different then when we had become Snow Angels! 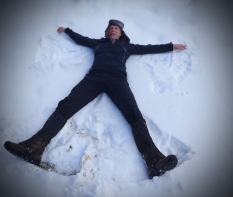 This time we became Sun Angels! 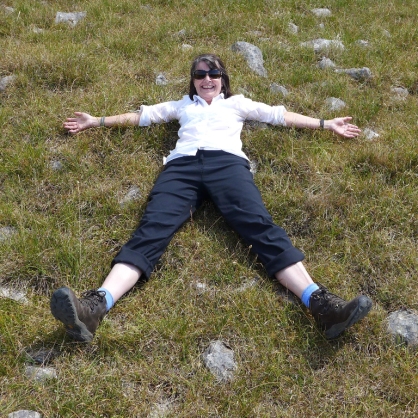 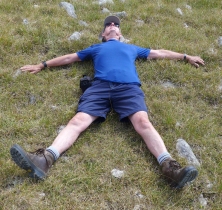 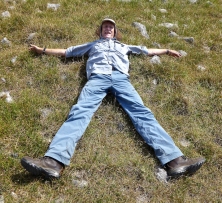 It was at this point that Alf decided he should postpone retirement and continue working. We then came across one of a number of well preserved examples of the industrial past of this area. This was a hint of the industrial past which we would soon come upon on a grand scale. It must have been hard manual work in both the heat of summer and the cold of winter in such an exposed location. 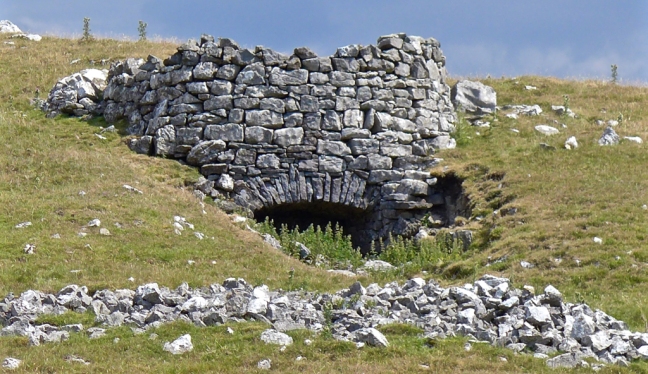 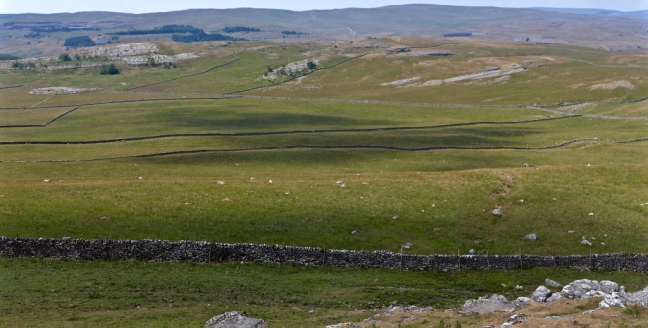 We then started ascending to Bale House.

Where at about 2pm, at the nearby High Barn, we stopped for lunch.

We then descended to Yarnbury and an extensive area of mine workings. It is difficult to imagine the hard industrial largely manual work that our forefathers must have endured to make Britain a rich and industrial nation. But hopefully these posters and photographs will give you a flavour. 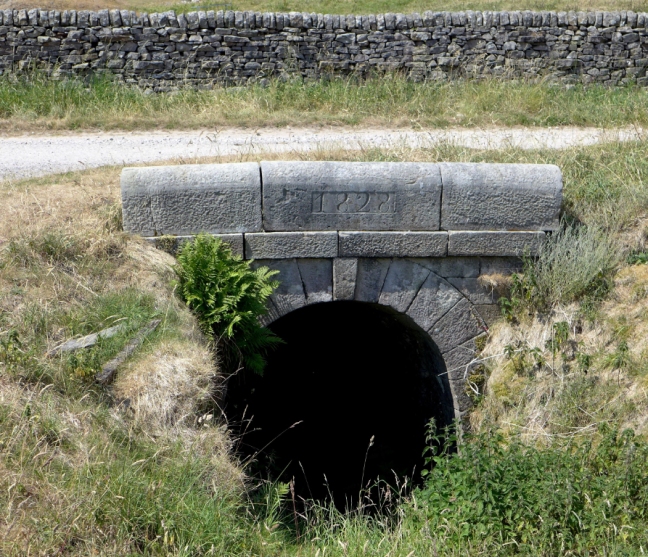 We then descended to Hebden Beck and followed it to Hebden.

At Hebden Sid the Yorksman  got his Chardonnay bottle out, swearing it was water. But when he mentioned he had gone a bit faint I did wonder.

We descended further to the fine suspension bridge over the River Wharfe, where people were cooling off by swimming in the river. 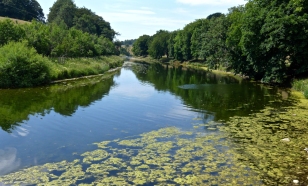 The temperature increased further as we ascended the other side of the valley towards Thorpe. It was now Geordie Caz’s to have an enforced stop as her energy simply disappeared. My water was almost out too. We still had 2-3 miles to go.

Getting going again we had a long ascent and then descent to Linton and the walk had become a struggle as the heat intensified. However, Linton has an oasis in the last and 26th pub on the Inn Way, The Fountain Inn. Somewhat unusually we stopped for liquid repleshment. In my case a pint of orange squash, A sign of the hot weather!

Linton is quite picturesque.

It was now about 5pm and so we pressed on towards Grassington. We had to cross back over the River Wharfe ,which here had largely disappeared. 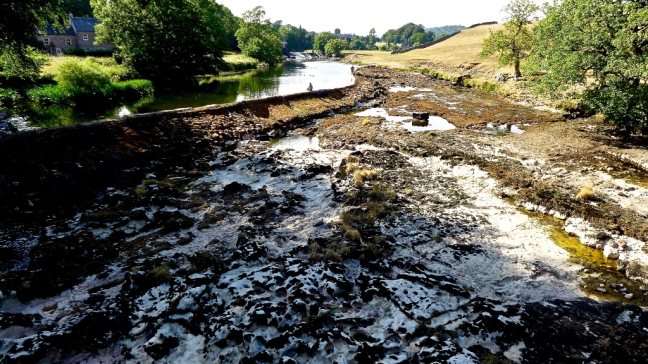 What water was left was being made good use of by the locals to cool off. 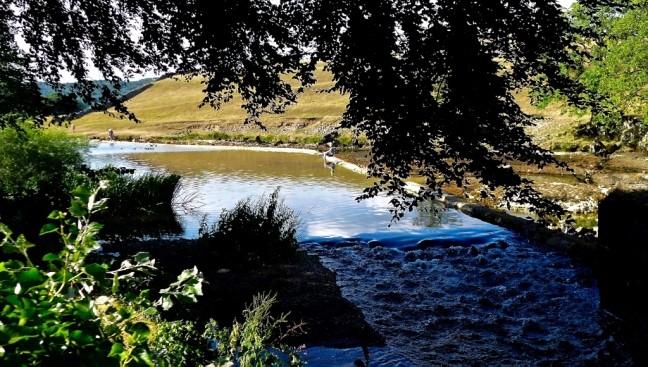 We arrived back at the car park at about 5.15 pm and were too late for a celebratory ice-cream. My 56th long distance-walks completed.