After my fairly energetic previous day climbing Ullock Pike and Skiddaw, I would probably have benefited from a rest day, but Cumbria Man has something else in mind.

We parked in the Keswick Rugby Club car park and wandered through Keswick with the ladies heading off to the shops before agreeing to meet up with us at Mary Mount near the Lodore Falls Hotel for lunch at 2.30pm. Our lift back.

We followed the road which goes between the A5271 and the Borrowdale Road B5259 past St John’s Church and then turned right along Springs Road to cross over Brockle Beck. It looked like there had been a few gales, but not today. Not easy for someone over six foot to get under. 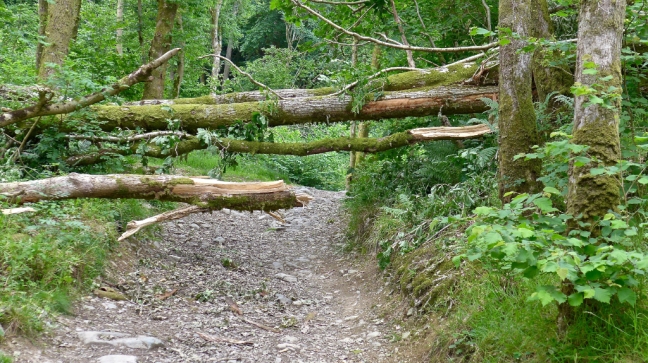 We then ascended with Brockle Beck on our left to take a right turn to Rakefoot. We continued to ascend on open ground with fine views over Derwentwater to Cat Bells

We passed some Duke of Edinburgh participants who were administering blister pads to their feet. A fairly common sight at this time of year. A few blisters and suffering on the fells is character building so I am told! I just think it is painful and should be avoided at all costs – the blisters that is.

We kept to the wall on the right and took a path through a gate to above Walla Crag.  We could look back to Keswick and Skiddaw, which I had summited the previous day. I felt very pleased that the day I summited Skiddaw the weather had been so much clearer and sunnier. However, we were still in for a dry and warm day even if not quite so clear. 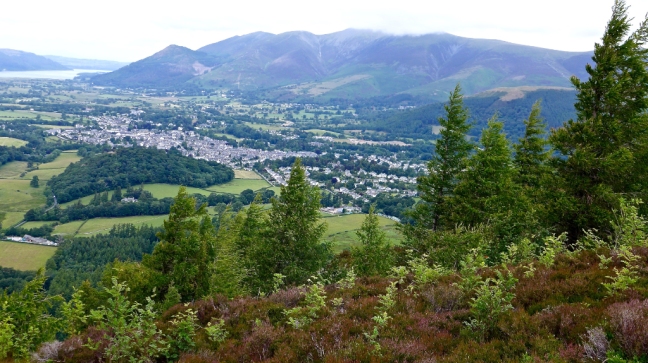 Walla Crag’s height is easy to remember at 1234 feet and  comprises a rocky, heather clad and forested area.

We returned back to the main path to Bleaberry Fell, which at 1932 feet was our next objective.  The path was dry and easy to follow, unlike many of the swampy boggy areas normally hereabouts.

We soon reached the summit cairn where, at just after midday, it was time for a late coffee and banana break, with excellent views all round. The only problem was that I had forgot to bring my coffee.

There are extensive 360 degree views from here, including of Great Cable (top middle in the photograph).

We were soon on our way to our main objective of the day High Seat. According to Wainwright the route is all swampy and is recommended only as a penance for sins. Fortunately, I had been a good boy and so the swamps weren’t that bad. Alternatively, the recent dry weather had made it acceptable. However, I could imagine with a little rain it would be a nightmare. We reached it at just before 1pm and by this time I had been ‘converted’. Not to a new religion for my sins, but to shorts as it was getting warmer.

The summit is at 1995 feet but with my extra 6 feet I think that means at least my head had climbed a mountain, which is generally regarded as being over 2,000 feet.

For those bright sparks (there are some) who say I should have climbed onto the trig pillar, I did that once when I was much younger on Pillar, but the problem is getting off again without causing injury. Even more so now I am older.

We were now running late for our ‘meet’ with the wives and so hurried on, downhill all the way now.

One final look back to the summit

We descended to Ashness Gill

It was steep and long and the two days of walking were catching up with me.

At neatly 2pm we reached Ashness Bridge, one of the most photographed scenes in Lakeland. 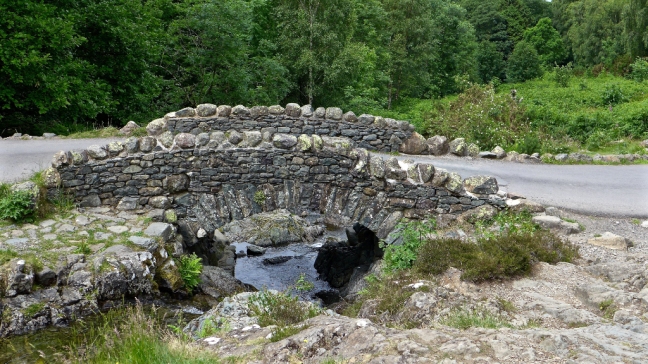 It was a quick dash down to the Borrowdale Road (at this point I could have used my bus pass for the last mile or so but there was no bus) and then left past the Borrowdale Youth Hostel to Mary Mount and late lunch.

We were slightly late for our ‘meet’, but not by much. We looked for the shopping bags of the wives and counted the cost. It was much cheaper on the fells.

Calories Burnt 2,993 (quickly replaced by steak pie and chips – the wives had salad!)