I was now on such a high after a great holiday that I didn’t want to miss any photographic opportunities in the little time left. I had one full day left.

However, Victoria and myself had planned to have a relaxing last day as the forecast for later wasn’t brilliant and we thought we would watch The Royal Wedding, also known as The Wedding of the Year, as Victoria knew I was an expert on such matters (author’s licence).

In the morning my mind had different ideas and I sensed at about 5.00am, when the birds were singing, that it was going to be a good dawn. Victoria would be snoozing until at least 8am and so I had some time to myself and headed down to the lake taking this first photograph at about 5.48am.

This time of the day when you have the world to yourself, in a peaceful setting, is awe inspiring. I wandered quietly along the lake. A tear or two fell, not for the first time on this holiday.

I felt so lucky to be able to visit this lovely location and that Victoria and her family had been so kind and welcoming to me. 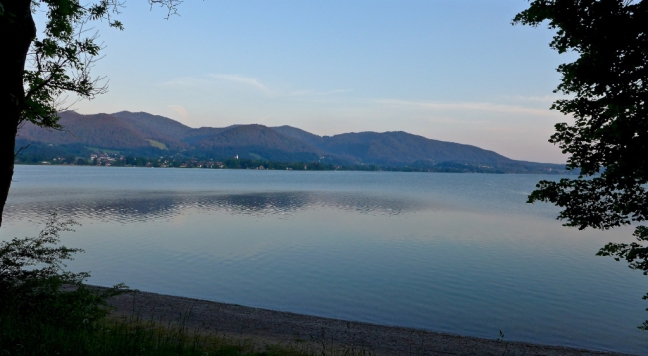 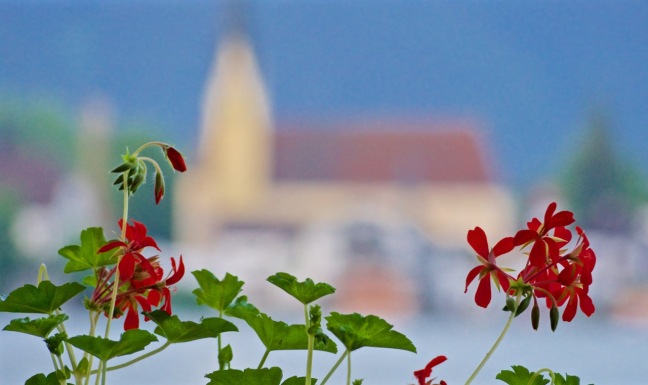 It was simply gorgeous. Even at this time of the morning there was glorious colourful meadows and the sun was warming me. I was spellbound. 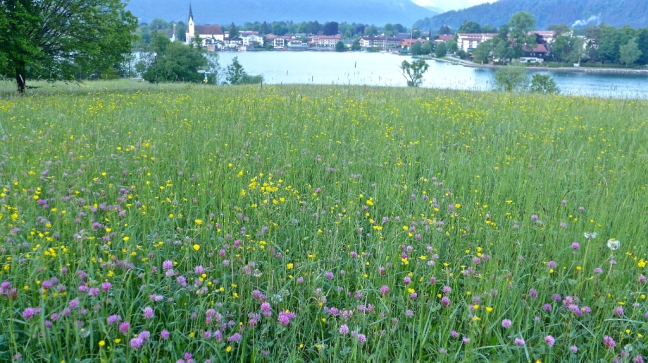 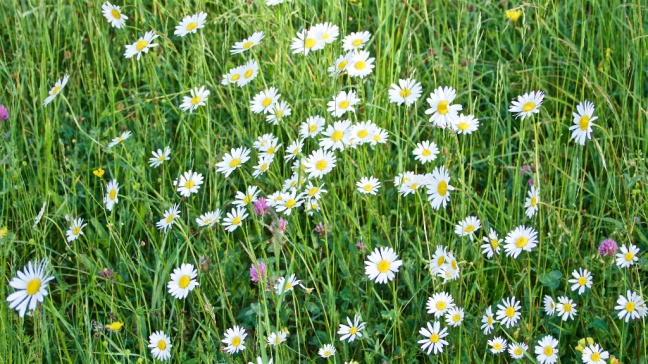 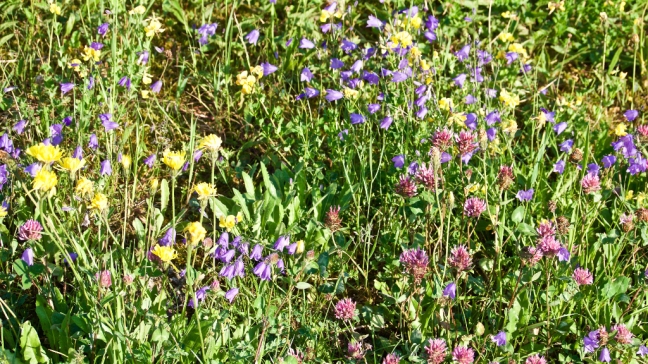 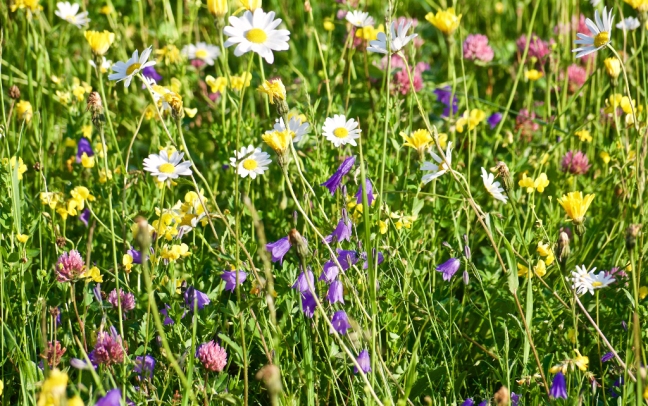 However, I was not completely alone and I was surprised to see people paddling in the lake. I enquired if it was possible to join them but, not being a member of the nearby orthopaedic clinic, I was advised to try further down the lake. The clinic is the largest employer Tegernsee! It was members only! So even the Lake here has healing properties! 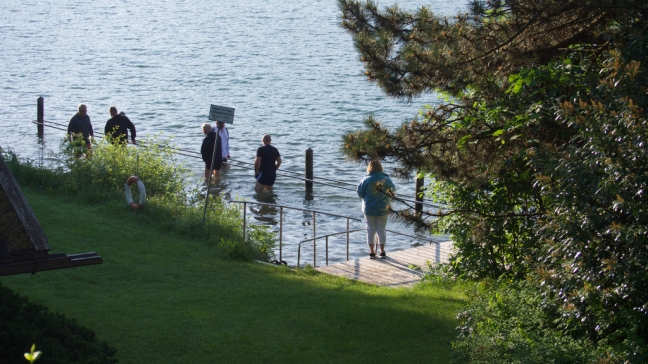 So I carried on with my photography as the light grew stronger. 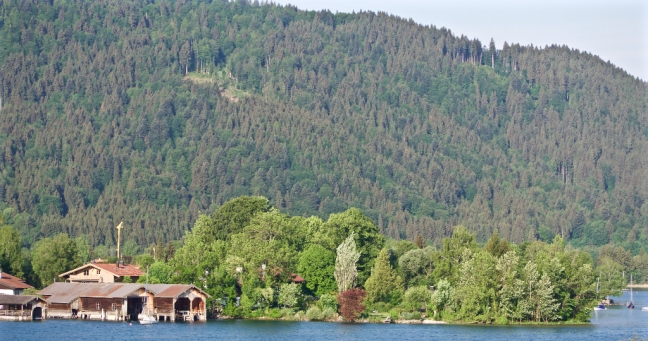 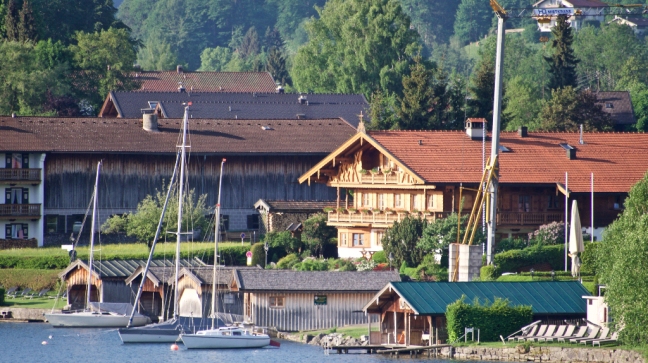 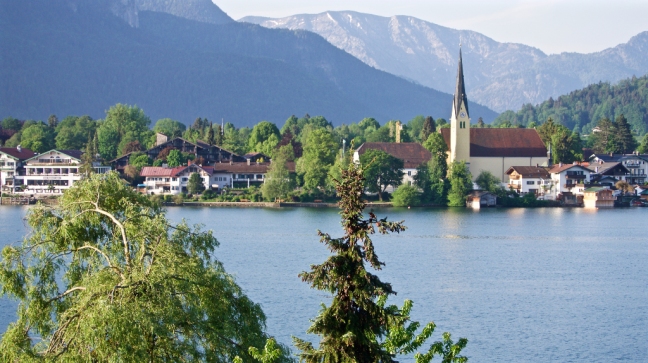 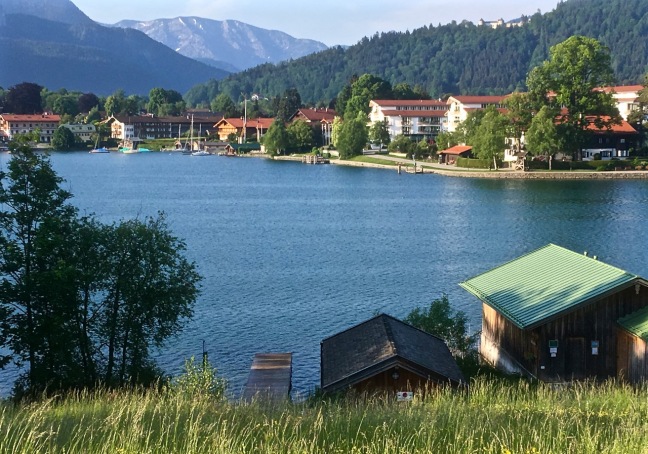 As it got towards 8.30am, I decided the best of the day, photographically, was over and decided to head back to ‘my flat’ (Victoria’s) for my warming porridge, blueberries and cinnamon all cooked in a saucepan.

I passed the chess pieces in the grounds of the clinic, one of my favourite activities when I was younger. 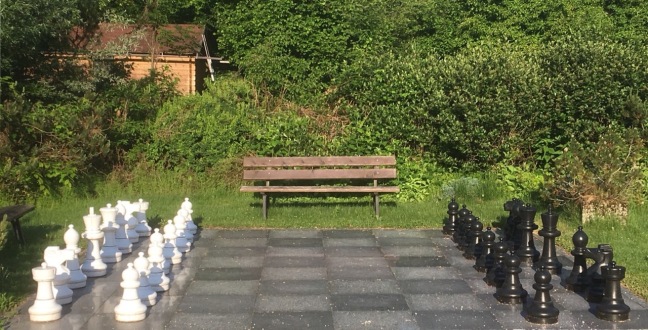 A bit later on Victoria emerged and I can’t remember for the life me what my second breakfast was!

It was not long until the beer was opened as the Royal Wedding appeared on TV. My excuse is that I was in Bavaria, a home of beer, and there was a Royal Wedding to celebrate!

After the wedding Victoria had a bit of fresh food shopping to do and so I had a word with her mother and borrowed a hoover to clean Victoria’s flat, which I had been using. Victoria would not have given me permission.

After lunch we went for a final walk around Tegernsee to see the church and of course have a final ice-cream (or so I thought).

There was a wedding on at the church, the latter being beautifully decorated! For this couple it was their wedding of the year, indeed of a life-time. 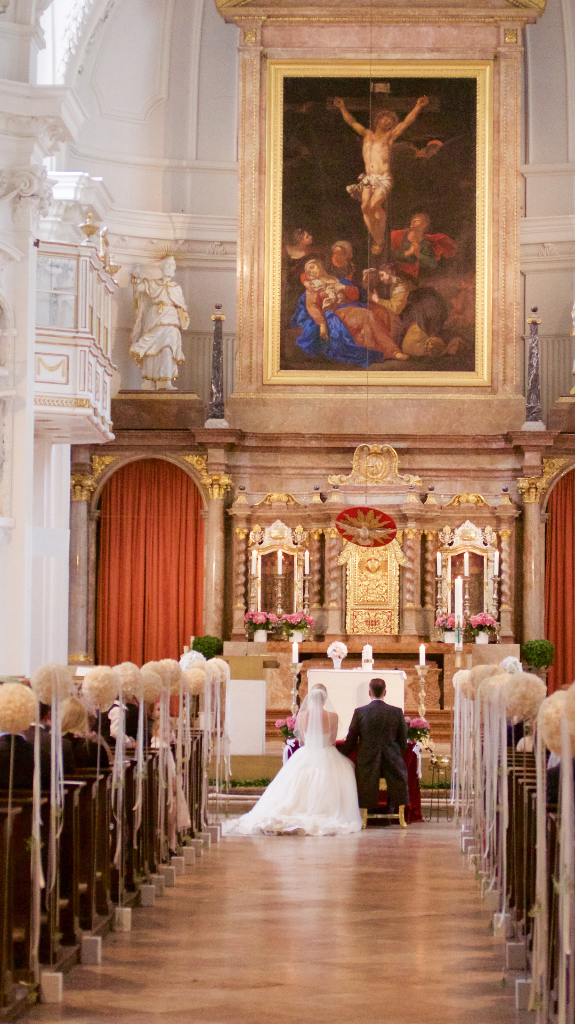 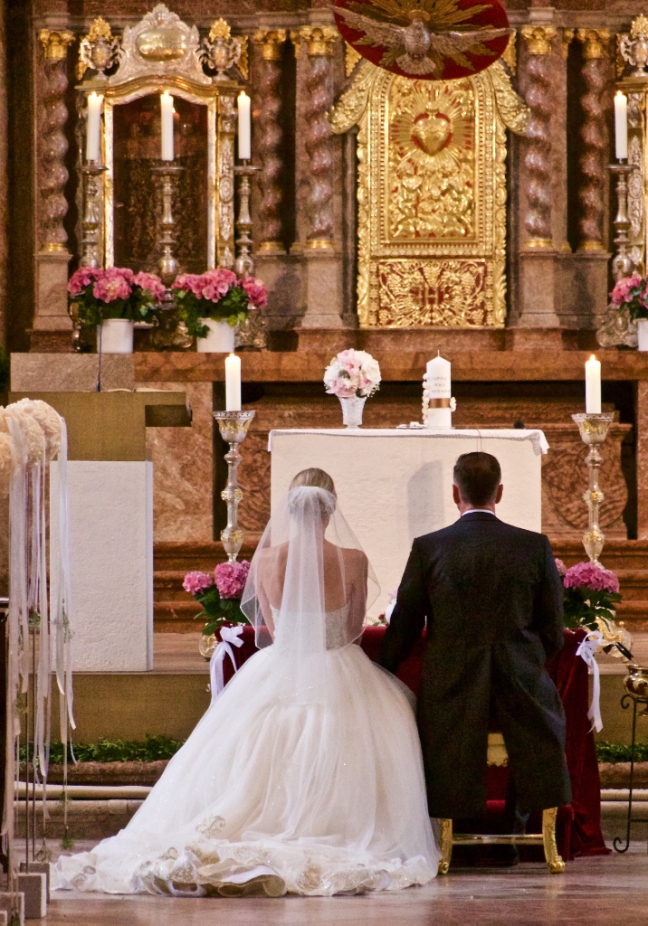 It looked like a little child had enough of weddings for the day and was trying to escape – not like me of course! 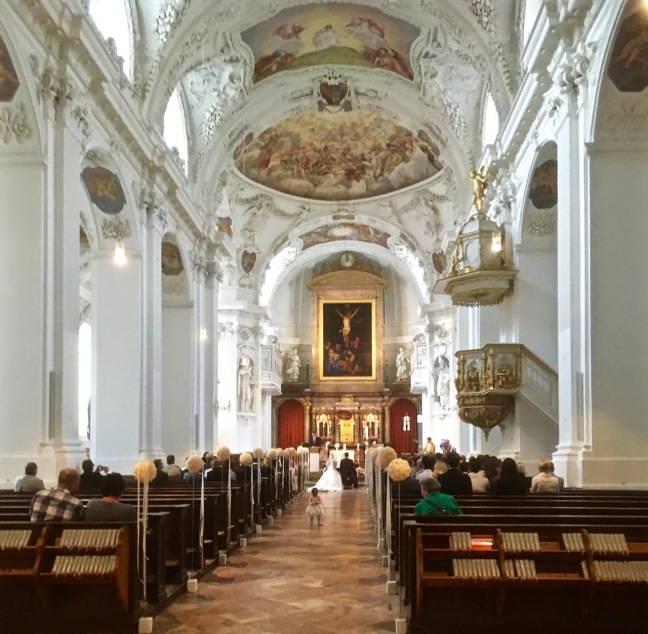 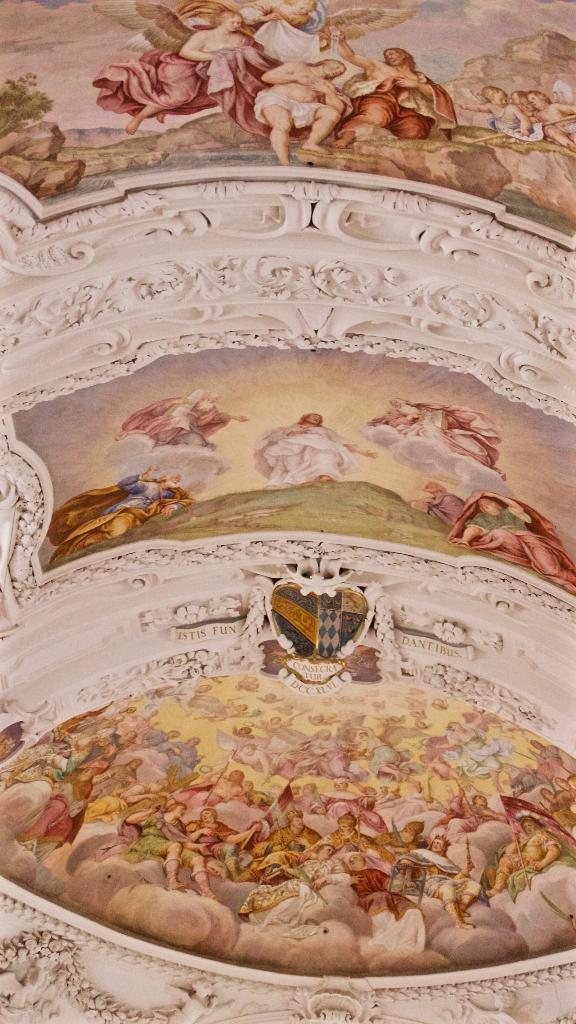 It was time for the final ice-cream sitting by the lake. 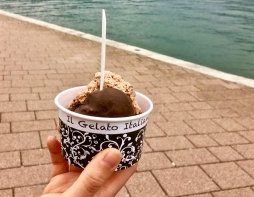 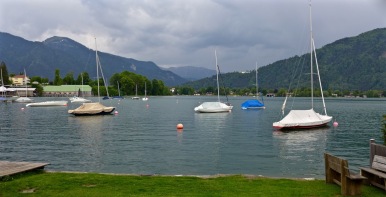 Victoria had an easy walk planned going back to her flat, but it was somewhat higher level than I was expecting for a ‘restful day’! But very beautiful. 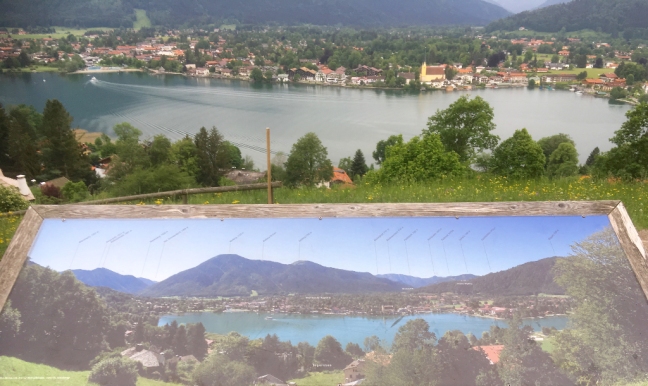 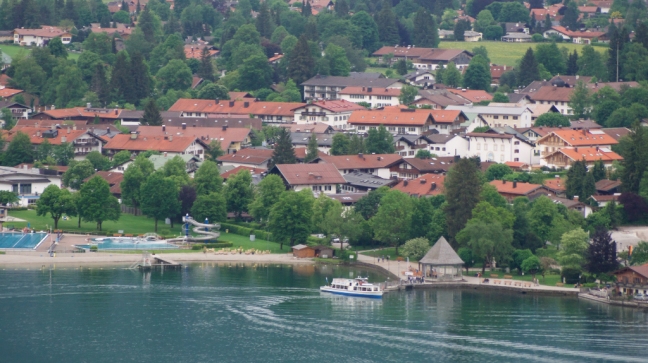 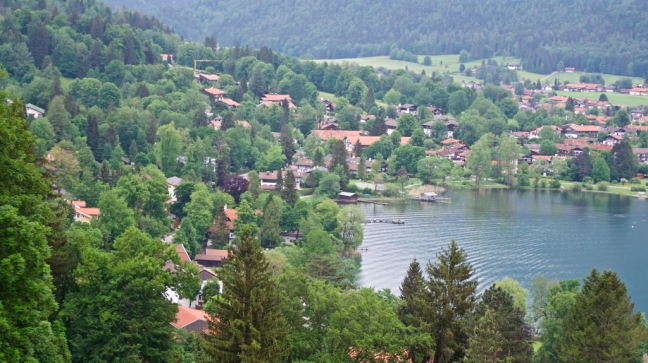 I was then told that Victoria’s parents had invited myself and all the family for a final evening meal of slow cooked roast pork, and beer of course.

As well as enjoying fabulous food, we had many laughs about the funny incidents and ‘lost in translations’ of the holiday, not least Victoria’s car, an Astra, being mistaken back in the UK for a secret child (well these are Secret Diaries). Also “Where had the time gone?”. “We left it on the street”.

The surprise came at the end – a delicious ice-cream selection with that ‘stimulating’ egg liquor on top. I must get some! 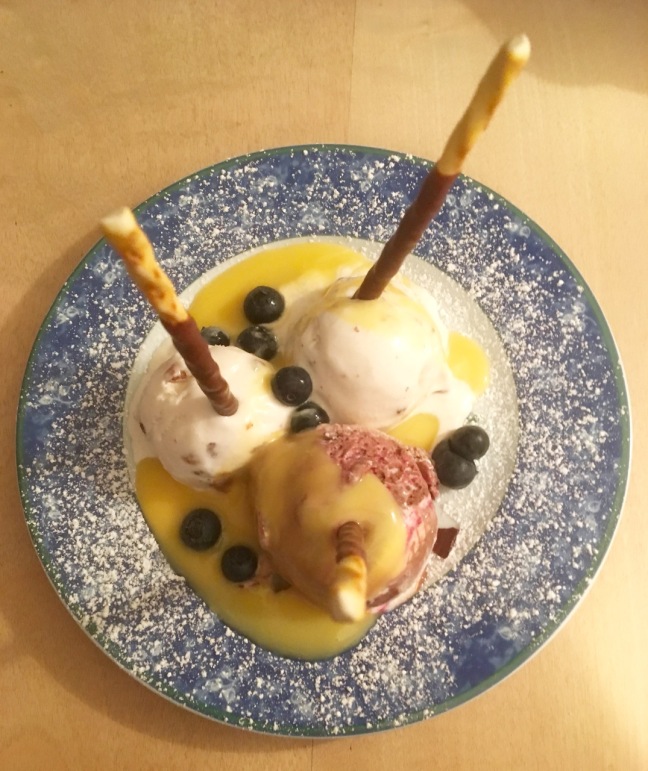 The next morning it was time to head home with much thankfulness, but sadness too. There seemed to be one traditional dish I had forgot to have. White sausage, pretzels (breze in German) and mustard sauce.

But no – Victoria came up with the goods and showed me how to cook and skin the sausage. It was delicious. 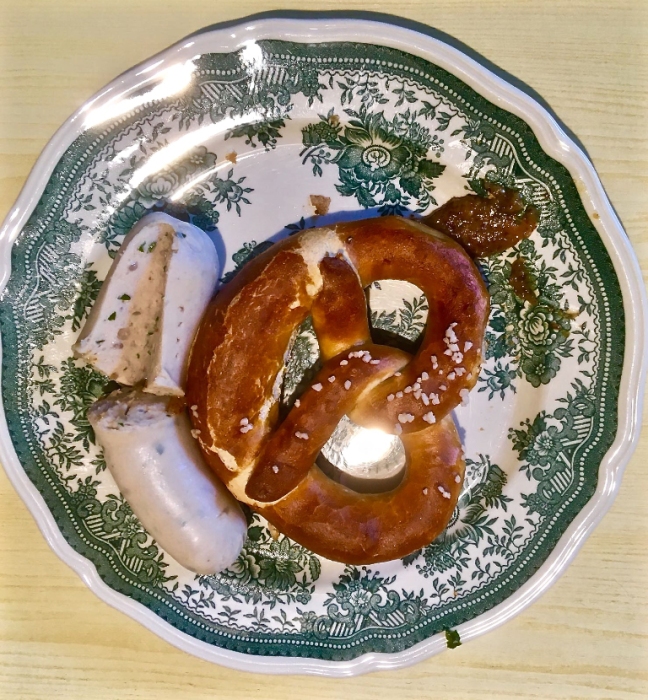 There were even some pretzels left to take to the airport. They originated possibly amongst the monks in Europe in the Middle Ages.

All that remained was for Victoria to drive me to Munich Airport and say farewell and for me to land at Manchester Airport, where there was train chaos due to timetabling changes! It was so good to be back in England! 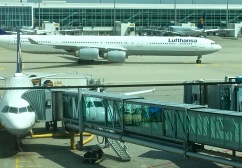 In conclusion, I would just like to thank Victoria and her family, without whom and their incredible kindness and hospitality, this memorable and throughly enjoyable holiday would not have taken place. It is a holiday that will live with me for the remainder of my life, due partly to the fantastic landscapes and experiences but mainly the kindness and thoughtfulness of my hosts.

Not forgetting my thanks to the cat who avoided me most of the time and was very pleased when I had left so as to be able to reclaim its favourite location! 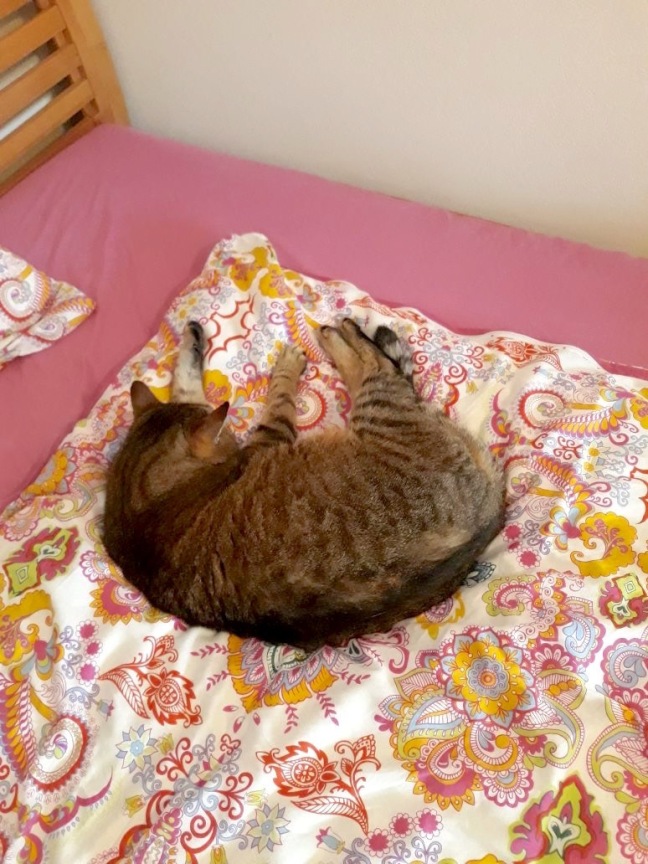 I intend next time I visit to get a Lederhosen! Honest! With my legs Bavaria will be set alight! 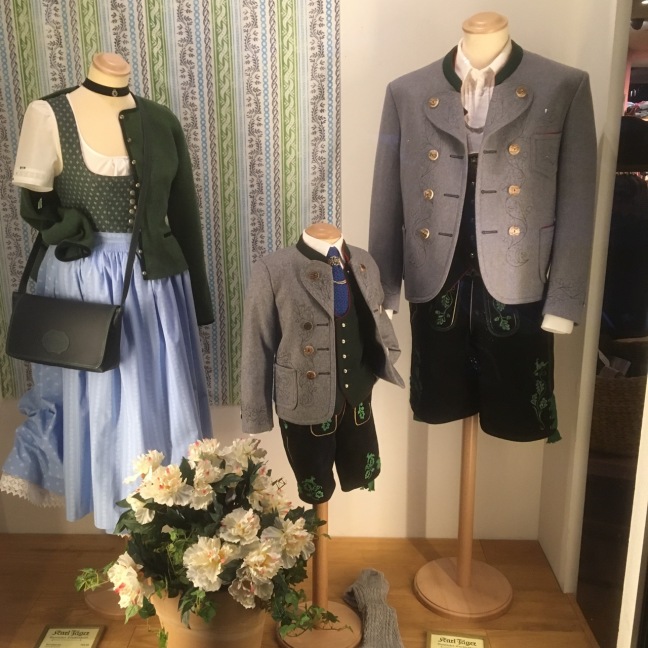 I do hope the ‘Bavarian Sagas’ will continue. After I got back to England, Victoria sent me a photograph of the peony I had given her Mom and it had flowered. That is a start… 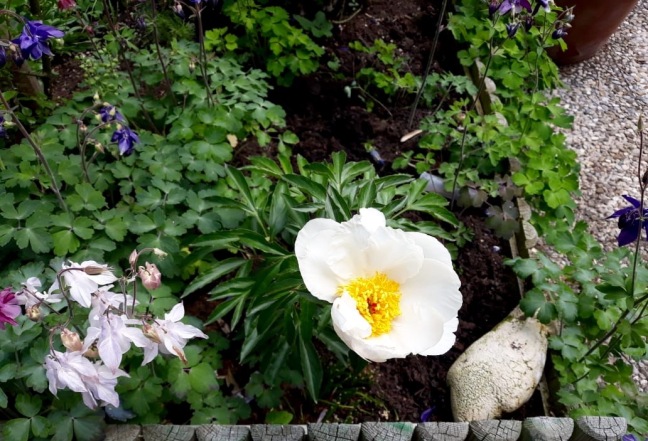 I will end with a great thanks to Victoria who was my driver, guide, chef, organiser, walk route planner, accommodation provider and friend. Without her the holiday would not have taken place.

“One photograph can be the start – but a series of photographs can make a journey.”