The previous day I had gone to collect my car in the Midlands following its replacement clutch being fitted. The previous clutch had ‘exploded’, which as I explained in my previous blog is the first clutch replacement in any of my Volvos for over 30 years. Rumour has it that it might have been the Russians in retaliation for the expulsion of their Ambassadors.

Having left York at 6.00am it had taken over 5 hours to get to Wolverhampton in my courtesy car, a BMW Series 2, but only just over 2 hours to get back in my Volvo V40. By no means would I like you to jump to the conclusion that Volvo are better than BMWs. I even got a creme egg and dime bar courtesy of Volvo as well as all expenses paid.

It always seems easier getting back into Yorkshire than leaving it.

I had done enough driving in the last few days and so Alf brought out the emergency reserve transport (his main car was not available due to grandchildren duties). Now we might have done better using the bicycles outside the Lockton Youth Hostel.

What was worrying is that the wire in the boot was in case the exhaust came even more loose than it was already.  The rubbish (milk bottle and Sainsbury’s bag) in the back were what we collected at the end of the walk. The ‘other bits’ are another story.

However, we had nothing to worry about as there was a decent first aid kit, especially if there were lots of insects about.

All we had to do now was find the CD player and CDs. This proved impossible as there were only tapes and a tape player. Alf’s children must have had a strange taste in music  as I didn’t recognise any of them.

Having completed The Inn Way, North York Moors, we had planned to start The Inn Way, Yorkshire Dales, starting from Grassington. However, the forecast was for heavy rain all day so we decided to find a short walk somewhere else, hopefully a bit drier. We thought about the coast but high winds were forecast and in the end we decided on a 7 mile walk around the Hole of Horcum on the North York Moors, which we should finish before the rains came. Coincidently an almost exact replica of our planned walk was in this months Country Walking Magazine. 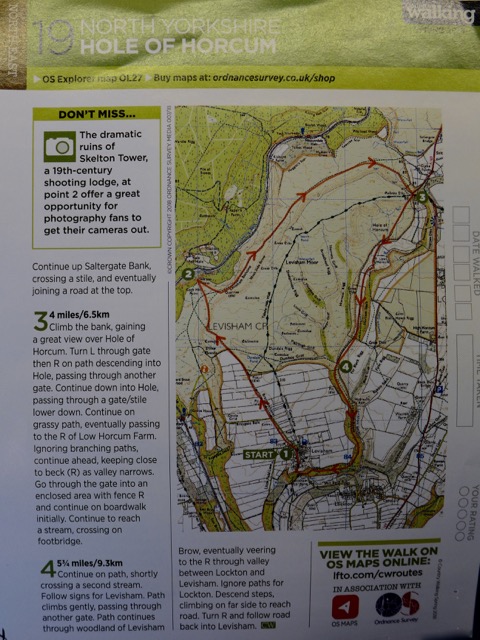 We were due to start walking from Levisham, but there is a very steep descent and ascent for about a mile to get to the village and Alf wasn’t sure the engine would cope with it. He decided to risk it, despite noticing a gap in the road barrier where presumably a car had gone off the road in the bad weather at a bend to plunge to the valley bottom below.

We started walking at about 8.30am and put waterproofs on from the start. I decided not to take many photographs as it was dank and misty. However, I had to take one entering the Hole of Horcum.

At the bottom of the hole we had a very early lunch.

We climbed out of the valley up Dundale Griff to Dundale Pond and back to Levisham. We finished walking at 12.30pm and with some spare time decided to audition for Top Gear given that we understood the Top Gear Grand Tour series was due to finish.

Ours would be the Alternative Grand Tour – The Last of the Summer Gear.

We started by demonstrating the safety features of Alf’s Toyota Corolla GS. We were not sure what the GS stood for but it was possibly, Gone to Seed, but then we weren’t sure whether it referred to the car or the car owner? Or it could stand for ‘Great Scot’.

It certainly did not refer to the chap on the bonnet testing if the pedestrian air bags were as good as on his Volvo V40. No airbags were found. Such bravery and athleticism for someone with a bus pass. We had set up special lighting effects (yes the car lights still worked) for filming, which basically made my legs look supernatural. There are rumours.

Unlike with a Volvo V40, the bonnet did bend under my weight!

Our next task was to compare the BMW Series 2, the Volvo V40 and the Toyota Corolla.

The BMW costs in excess of £25,000 and comes with a decent boot of 390 litres, can do 0-62 in 8.8 seconds, maximum speed of 130 mph, is supplied with alloys and had Drive Performance Control Eco, Pro and Comfort and Sport Suspension 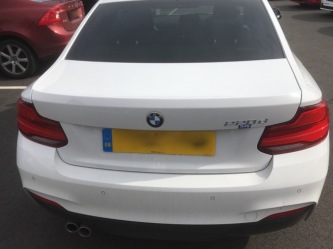 However, the 17 year old Toyota will appeal to the more prudent driver and offers of over £50 are invited to purchase it. It has aerodynamic sleek lines and turquoise colouring. 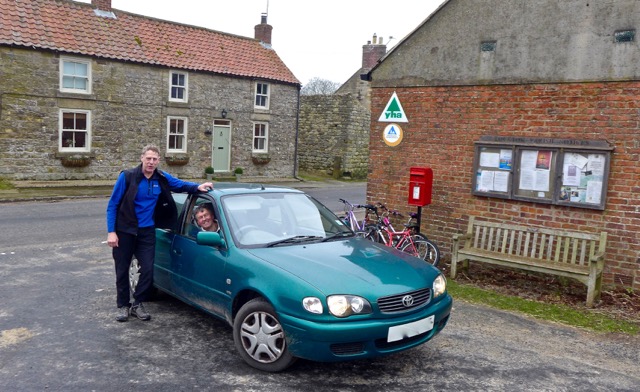 Registered in 2001 its CO2 emissions are 162 and presumably the road tax is quite high and it is not eco friendly. It would make an excellent car for any scrap exchange scheme.

It comes with wheels, lights, a steering wheel, a glove box, tape player and chairs. It offers a vibration service for all parts of the body. It has a top speed of 55 mph with the wind behind it.

The exhaust could drop off at anytime and at the present time Sid the Yorkshireman says it sounds like a rally car. Not only does he need to go to Specsavers he also needs a hearing test (they do both).

However, the good news is that it has a working clutch.

On the way home the rain came……… 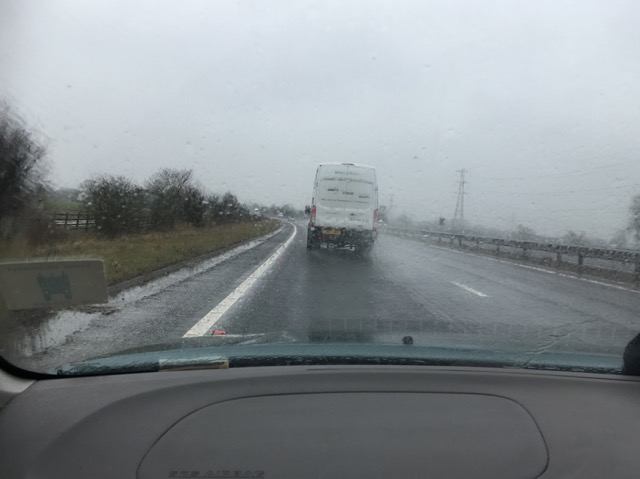