“The cars broken down” Celia, my wife, said on the telephone on Saturday when we were in the Midlands visiting our two 95 year old mothers for mother’s day. “The clutch is not working”.

“Well telephone Volvo Assistance”, I said from some two miles away at my mothers.

“Well put the hazard warners on if its dangerous.”

“There is a card with the number under the CD box and one in the glove box (for belt and braces). I will get a taxi and come to meet you. ”

By the time I got to Celia and the mother-in-law, the car (not the mother in law) was about to go on the lorry loader to be taken to the nearest Volvo garage in Wolverhampton.

We then got a taxi to the mother-in-laws a couple of miles where we were staying.

It was the first time in about 17 years that a Volvo had let me down. The last time was after dropping my daughter off at Northumbria University when my old Volvo 440 ground to a halt under the Angel of the North, due to an alternator problem. The AA had no problem finding us and took us home with the car on his lorry loader.

This was somewhat different as my car was only 15 months old and not meant to break down and I had planned to finish the Inn Way in Yorkshire on Tuesday. We had already postponed once due to the Beast from the East. This was an EMERGENCY.

I got onto Volvo Assistance and on Monday they had a courtesy car at the door. BMW 2 series automatic sport. Not a Volvo V40, but I could make do.

We travelled back to Yorkshire in pouring rain all the way, but I knew the forecast was good for Tuesday and the Inn Way. I also knew by now that a new clutch was required for my car and parts had to be ordered by the garage. I had not needed a new clutch since an old Volvo 340 had needed one about 30 years ago!

So we arrived at Helmsley at about 9.30am to start the last walk on The Inn Way.

This walk, which we had started on the 23rd November last year had been one of the most challenging I had done as we had walked throughout the winter over and through the North York Moors. I had fallen in two bogs, having only fallen in one other bog in the rest of my life. We had encountered deep snow, ice, cold winds, overflowing streams to cross, hills, fog, mist, paths that weren’t there, Carol and Sid the Yorkshireman had both had falls, we had found new routes and paths we hadn’t done before in order to get back to the cars, deep puddles blocking paths, mud and more mud. It had tested our outdoor gear (e.g. waterproofs, insulation, my 4 hats on once occasion, and spikes), knowledge, energy levels, map reading and experience to the maximum. During this time nature has revealed itself with great beauty and power with Supermoons and Super Snow and Cold.

I had loved it!

Today was to be, as in the Tour de France’s last day, our celebration. We knew we would finish the walk and this was a day to really enjoy ourselves.

The forecast was good and much warmer and sunnier than previous walks. Spring had arrived although perhaps briefly. We soon passed Helmsley Castle just after the entrance to Duncombe Park. 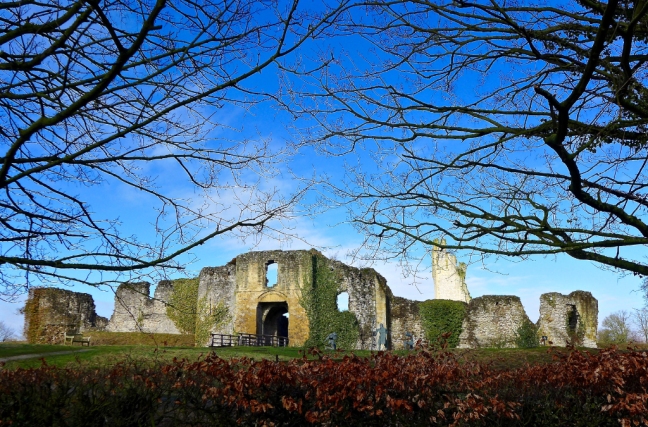 Sir Charles Duncombe, a wealthy London banker and Lord Mayor of London, bought Helmsley Castle and its estate in 1689 on the death of the Duke of Buckingham. 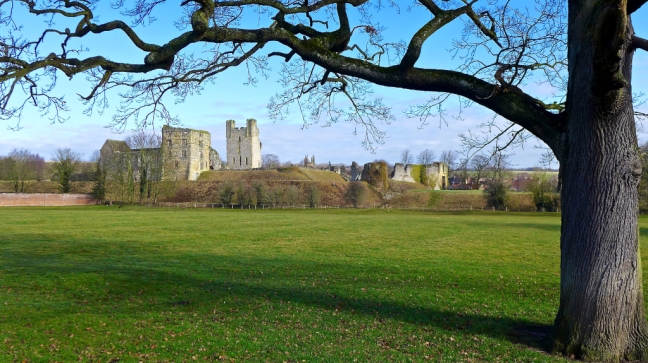 We passed the Ionic Temple. 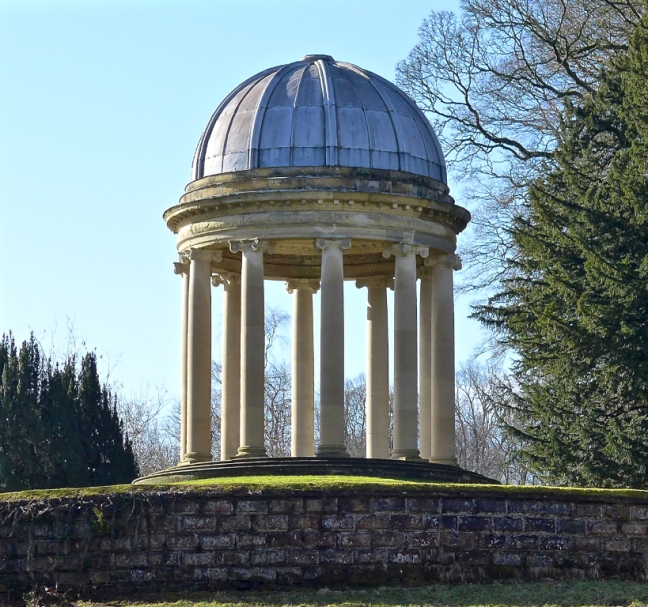 Ascending there were good views back towards Helmsley and the walled gardens of the castle, which are well worth a visit. 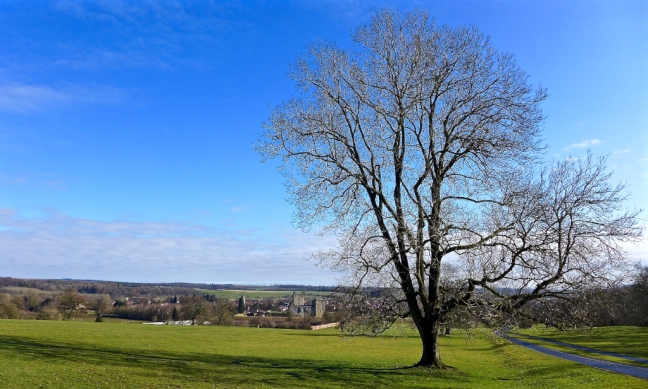 Carol had her first tree hug of the day. 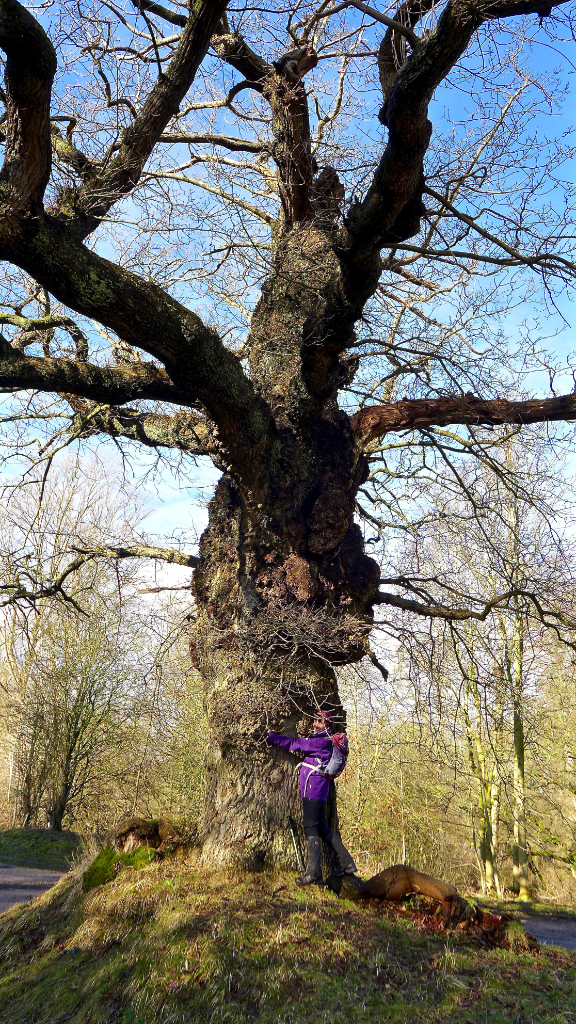 We reached Duncombe House, which was built in 1713 by Thomas Browne who later adopted the Duncombe name. The house is occupied by Lord Feversham and is open to members of the public.

After passing a tree felling area we reached Griff Lodge and The Cleveland Way and The North of England Way. 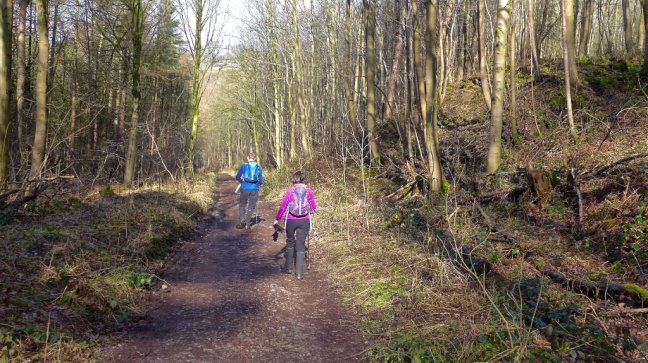 A helicopter flew over us just as in the Tour de France! Were they filming us?! 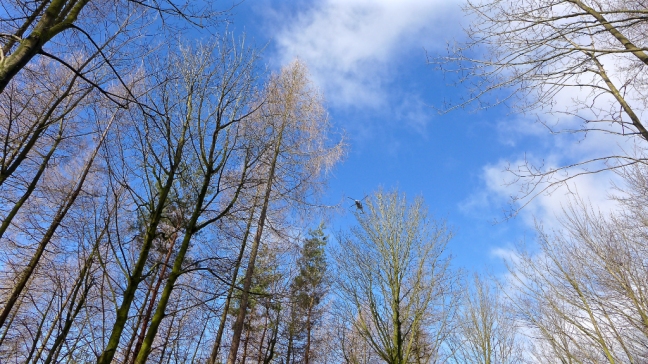 Rievualx Abbey could then be seen in its magnificent valley sitting. The monks were not stupid in picking this sheltered, picturesque location.

We then reached Rievaulx Bridge, which was where we needed to resume The Inn Way. Repairs were being carried out to presumably where cars and lorries had skidded into it during the bad weather. 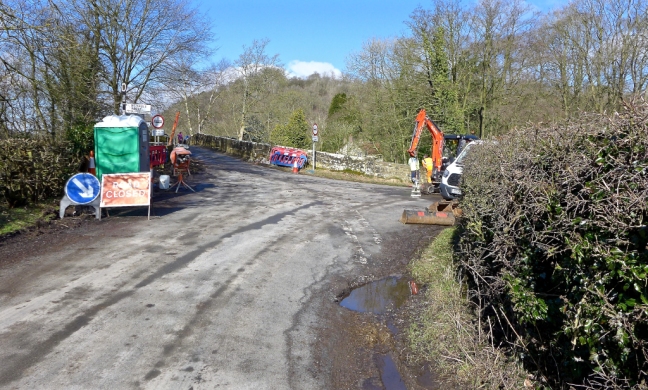 We carried on past Ashberry Farm to have our coffee and banana break at a bench with wonderful views in energising spring like weather. 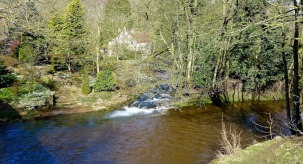 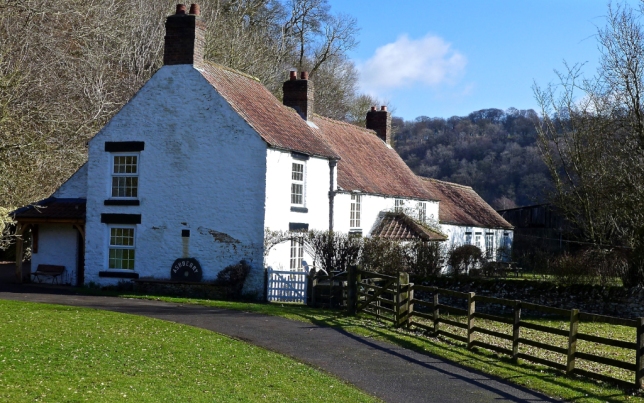 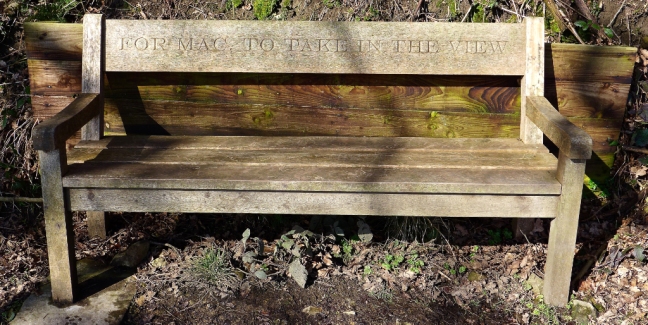 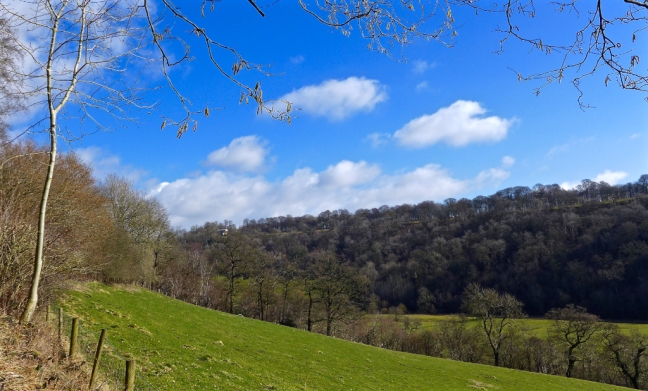 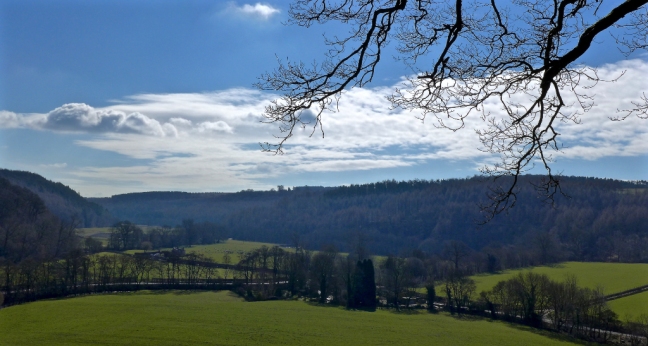 All that remained was to walk back three miles along The Cleveland Way and The North of England Way to Helmsley for our celebratory lunch at Mannions.

Carol and Sid the Yorkshireman were very happy with the delicious food. 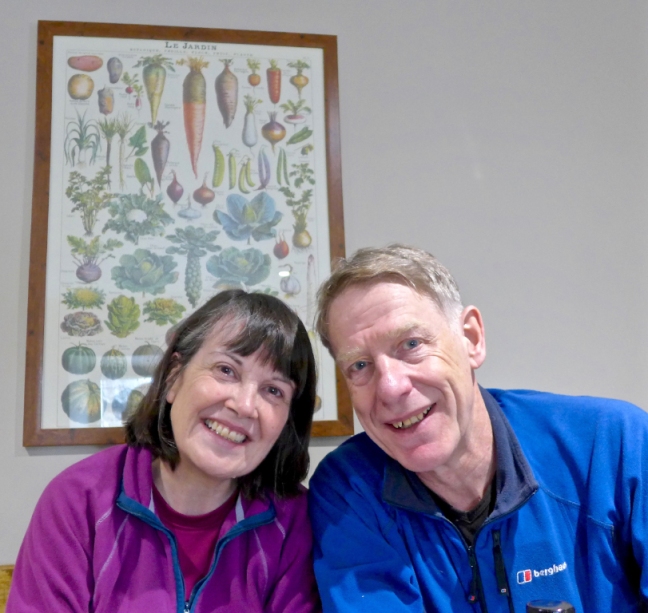 Helmsley is a delightful market town to visit out of season, but in the summer can suffer from its popularity with many people visiting. 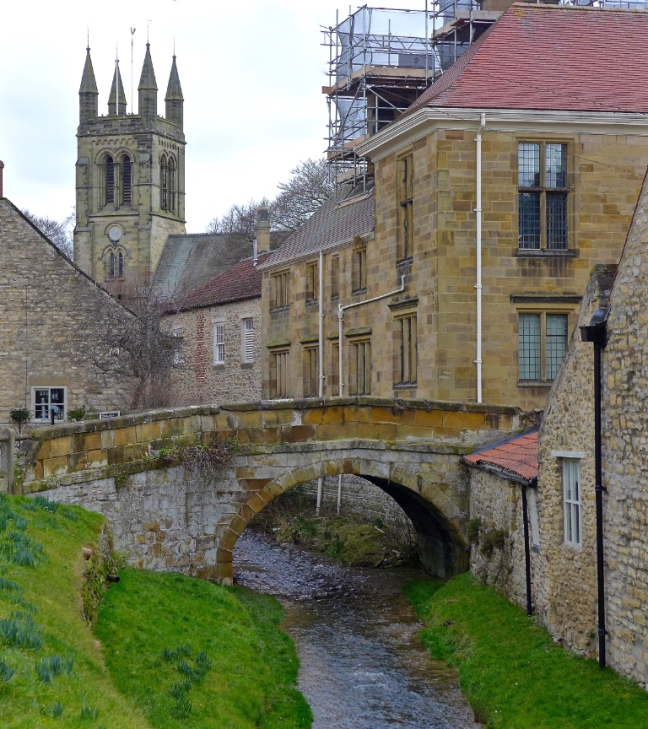 All that remained was to have a final photo call in the market place to finish a fine challenging walk. 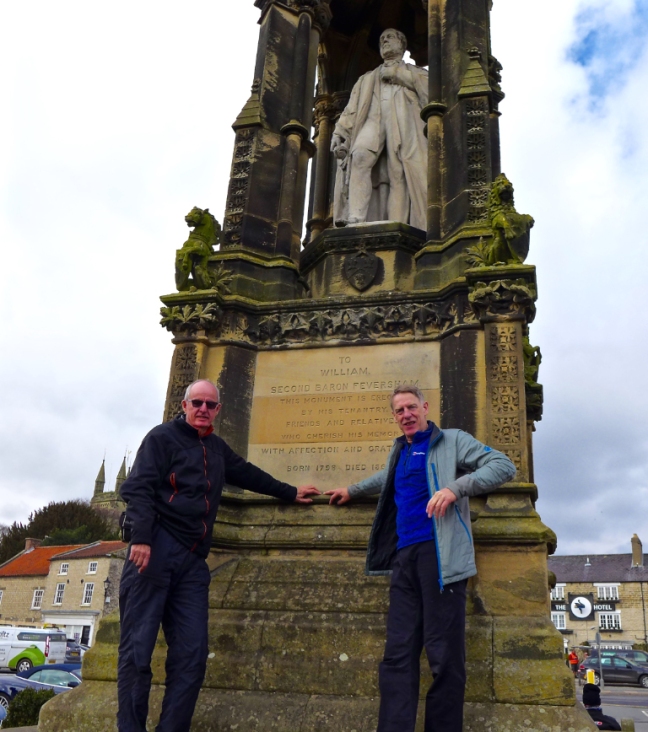 We couldn’t find it anywhere so we drove back along parts of the route, but with no luck.

However, when we got home I found it deep in one of the many Rohan pockets I have. “Age shall not weary them”.

Any typos or other mistakes are not due to gin!!!!

It is possible to walk The Inn Way as a linear walk and reduce the total mileage to an 89 mile walk.

Who Reads the Secret Diaries?

65% of readers are women