Carol had succumbed to a cold virus so there was only Sid the Yorkshireman and myself when we arrived at the recently closed Hawnby Inn. A sad sight indeed. However, the post lady informed us later that there were plans to re-open it, but it could be up to two years. Many of the residents of this upper part of Hawnby worked at the inn and so it was now very quiet there as they looked for work elsewhere. 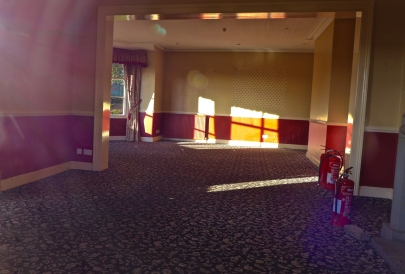 Hawnby is named after a Scandinavian farmer called Halmi and has a lower half and an upper half. Historically, it has been a strong Methodist village and John Wesley came to the village in 1757.

We headed east along the lane from the pub car park and then headed north-east then north on a delightful footpath and bridleway past Little Banniscue and Low Banniscue. The snowdrops were a delight.

There was much woodland clearing taking place.

We reached Crows Nest and then headed south-east to High Banniscue to resume The Inn Way. With the sun out there were lovely views towards Nova Scotia Farm and Hawnby Hill. 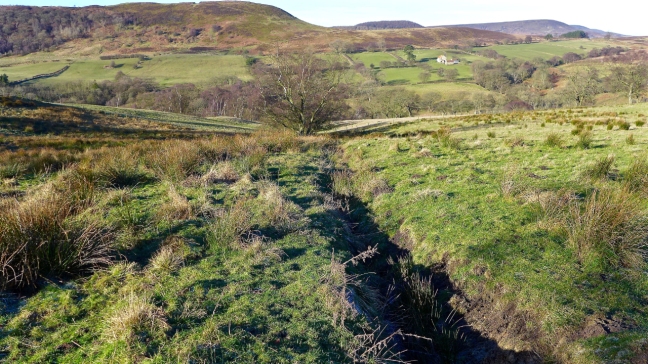 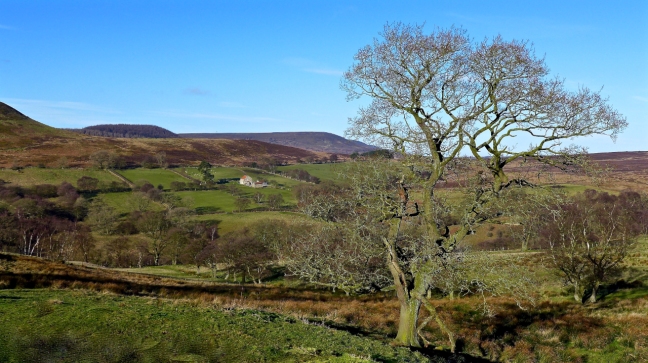 At this point I came across what would make a fine emblem for the North York Moors Winter Olympics. You can see the ‘Yorkshire Olympian’ if you look closely. The ‘sport’ would be Winter Cross Country Walking.

Our winter walking on The Inn Way has at times felt like a Winter Olympics and we had encountered much ice, snow, mud and winds on our walks. Indeed J.S Fletcher in his book The Enchanting North 1908 said about this area:

“The dales that stretch away in various directions from Rievaulx are as lonely as they are picturesque. In summer they are solitary; in winter, almost impossible to traverse. One may follow such roads or paths as there are along them for considerable distances without encountering a human being or seeing more than an occasional farmstead, far away from the world. But their beauty no one will doubt who cares to explore their recesses”

Even 110 years later in 2018 there are many walks where we have not met anyone else. There are also some days in winter when the moors become almost impossible to traverse!

Further along there were some other interesting ‘puddle ice creations’. Can you see the womb like animal figures in the middle?

Back to reality we had some lane walking back to Hawnby. 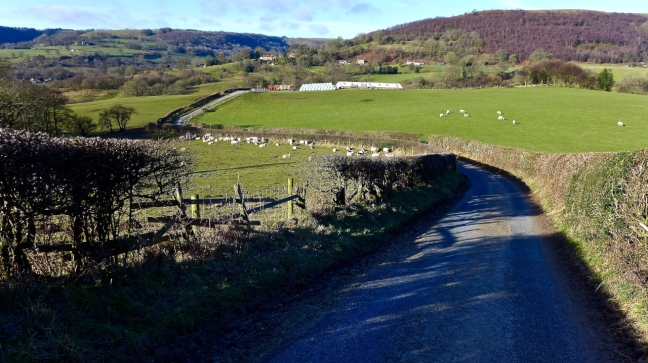 Where we stopped in what was probably the best coffee and banana stop of the whole Inn Way walk. Built in 1909, presumably as a horse stop, it was very sheltered, warm and sunny. 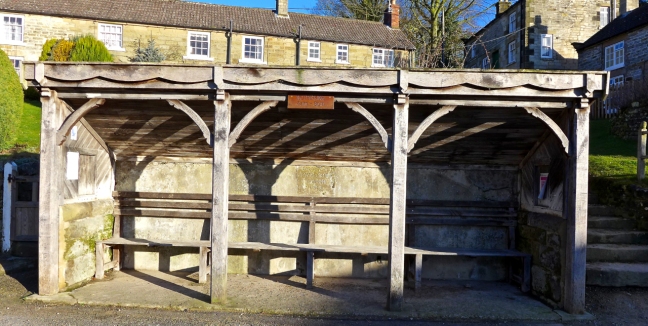 Leaving the village we soon crossed Hawnby Bridge over the River Rye. 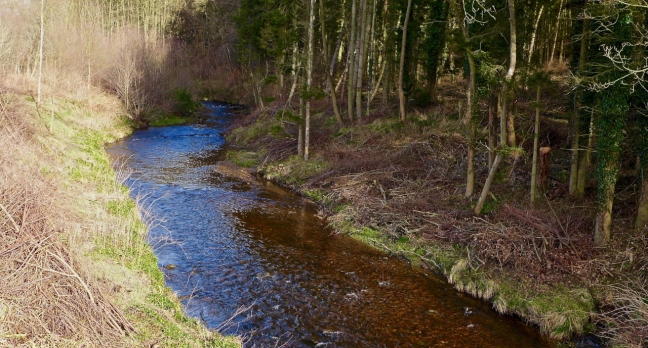 We then climbed around Coombe Hill with fabulous retrospective views.

Before descending towards Arden Hall, situated in the beautiful Thorodale wooded valley.  The building dates from the 17th century although it sits on a Benedictine nunnery which dates from the 12th century. Some remnants remain in the hall including a medieval fireplace. A pond known as Nun’s Well can sometimes be spotted through the trees. 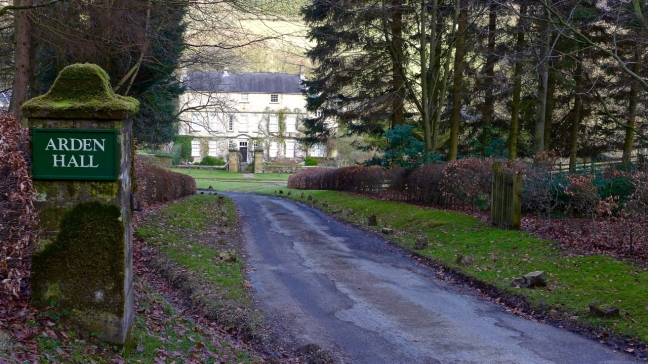 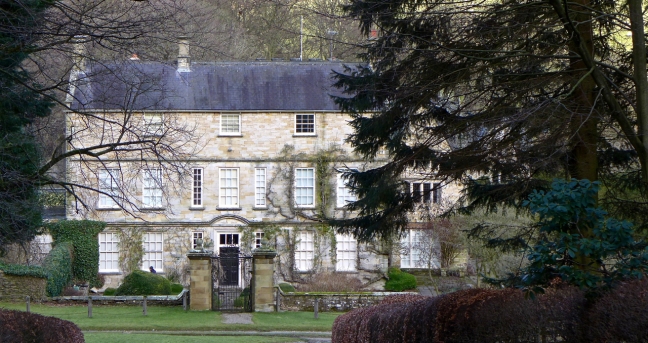 A steep long ascent followed to join the Dale Town Common bridleway, with superb views back towards Hawnby and the moors beyond. 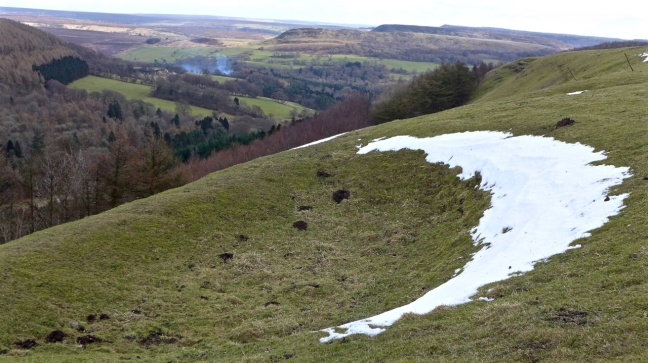 It was cooler and breezier on the tops and the sheep huddled together near their food. We started looking for a sheltered lunch spot.

After nearly missing our bridleway at a fork we reached the Hamilton Drove Road and as Paradise was closed we settled for lunch in the shelter of a wall. 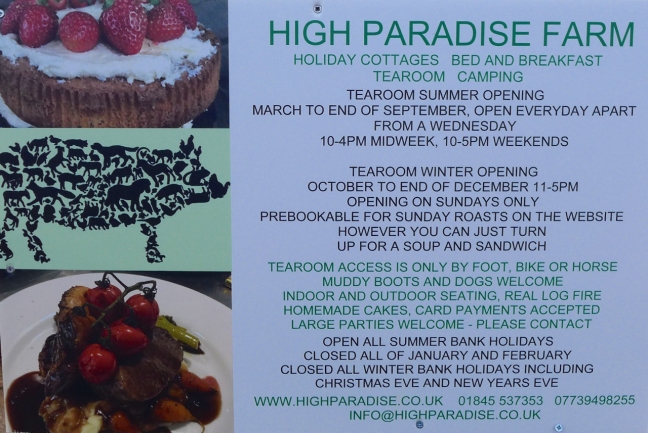 We saw a few casual walkers without rucksacks who had just walked from the nearby car park for a breath of fresh air.

The Hamilton Drove Road, along which marches the Cleveland Way National Trail, was an important drover’s road between Edinburgh and York, Malton and other market towns in the South of England. This mainly occurred between the 17th and early 19th centuries when livestock were moved to the south. The road was previously used by Roman legions.

Having had our lunch in a cool spot, we left The Inn Way to find a route back to the car along the tops, where ice puddles were clinging on, making delightful patterns. 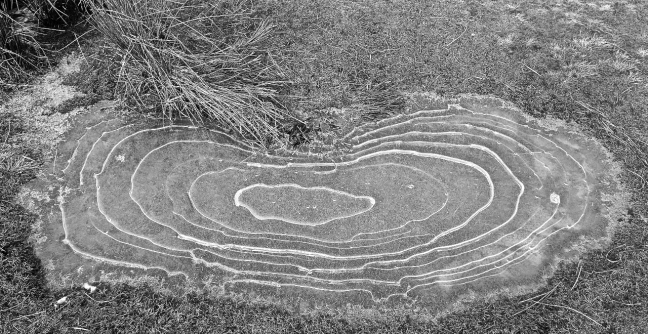 At least the adders would be hibernating.

The Bilsdale mast could be seen in the far distance and the views were 360 degrees.

We descended to Sunny Bank Farm where our destination Hawnby could be seen in the distance, below Hawnby Hill and Easterside Hill.

A little further on there was a fine view of Hawnby Bridge and its surrounds. It was designed by the famous architect John Carr.

We crossed over the River Rye again at Dalicar Bridge where, whilst I was taking this photograph, Sid the Yorkshireman saw a kingfisher.

We made a small diversion to the 12th Century All Saints Church decorated all around with snowdrops. 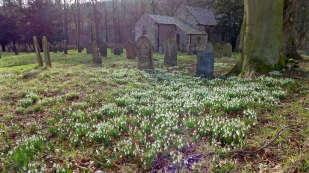 One of the stained glassed windows commemorates those who were lost in the Great Way 1914-18 and the numbers were high as the local vicar, known as the fighting parson of Hawnby, encouraged local men to join up. 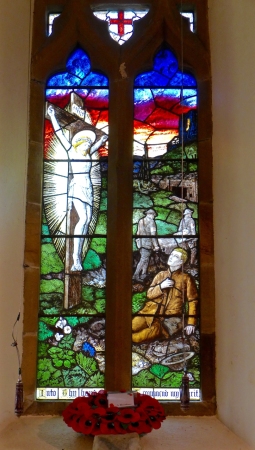 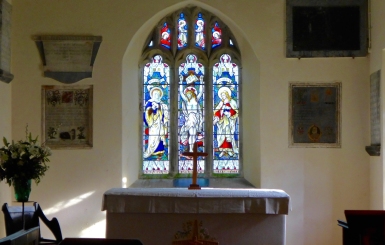 It had indeed been a fine walk in good weather, but we mustn’t tell Carol as she will feel she has missed out!

Sid the Yorkshireman decided on a ‘country drive’ back to York taking in Caydale Mill Ford. It was more like a river running down the road!

Last week he cleaned his boots in the river, this time it was his car!

A video is available on You Tube by searching under david maughan and looking for my photograph. Alternatively it is on Facebook. 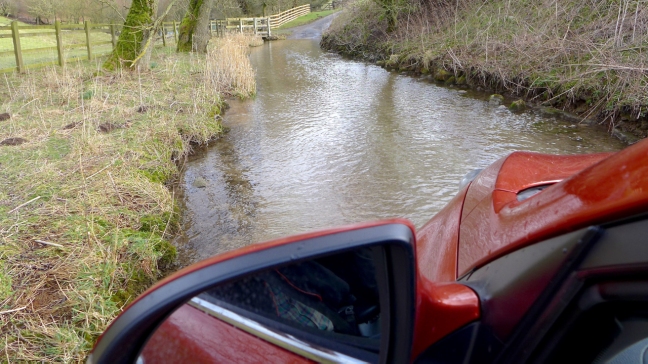