After last Mondays exhilarating but tiring walk in snowbound Rosedale we decided that we could resume The Inn Way on the North York Moors as we expected the worst of the melting snow to have gone. As an aside, I had in the meantime been reading, in the last few days, The Wainwright Letters.  I was intrigued to discover that, whilst  honeymooning in York in 1970 with his second wife Betty Wainwright, Alfred Wainwright went on the North York Moors for the first time. 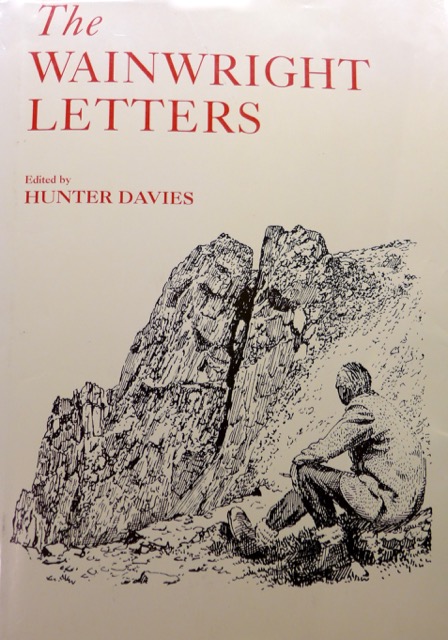 Wainwright’s first marriage to Ruth ended with divorce on 24 June 1968. He was found guilty of mental cruelty and had to pay a lump sum of £4,000 and £500 a year to Ruth during his lifetime. It is not within the realm of this blog to go further into the reasons for the mental cruelty, but he did spend all his spare time going on the fells and writing his guide books. They did have a son.

Whilst on the North York Moors,  Wainwright got the idea to devise his now famous Coast to Coast Walk and in 1973 this was published. By coincidence it was the year I got married and, despite my wife Celia having grounds for mental cruelty as I spend a fair amount of time on walks, planning walks, writing blogs and the occasional book and looking at maps, we have now been married for 44 years! I must be doing something right. In 1991 I walked Wainwright’s Coast to Coast Walk and am now on my 54th and 55th long distance walks!

We parked near the Farndale turning car park, just before the Lion Inn, Blakey. For night owls there is an opportunity to go interstellar.

We soon dropped down to the Rosedale valley bottom as we had to pick up The Inn Way route again from where we last left off.

What was noticeable this week was the increased sound of birds, clearly enjoying the spring like weather with temperatures much higher at 8-12 degrees. What a difference a week makes with last weeks snow all gone!!!

We passed the Rosdal (Rosedale) and Whitby signpost to reach the lane at the top of The George Causeway Gap to then rejoin The Inn Way and head back down to Rosedale (known as an out and back in the trade!). It had started to rain and so we donned our waterproofs. 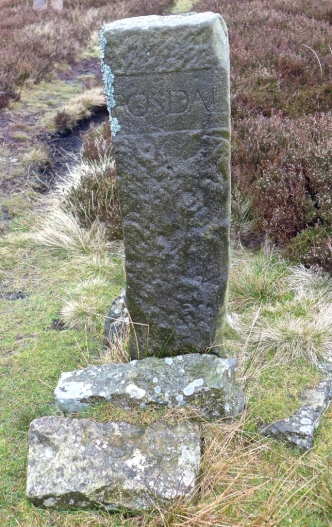 We came across a recently cleaned out culvert, which had probably been there since the railway (now dismantled)  had been built.

The place would have looked very different in the 1800s with trains crossing this embankment to service the Ironstone Industry.

There is now a £3.8 million Land of Iron Project fund by the Heritage Lottery Fund, David Ross Foundation and many other partners. It has a vision:

History: Record, conserve and safeguard the legacy of our industrial past as it slowly melts back into the landscape.

Environment:  Nurture and protect the natural world around us, helping it to flourish for many years to come.

People: Tell the stories of the people, industry and landscape that made the Land of Iron.

However, something else beckoned us.

The rain was getting heavier and this little oasis emerged. There is even cosy overnight accommodation. 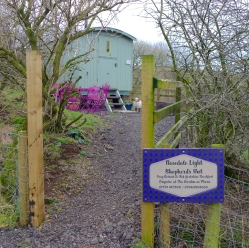 We had homemade flapjacks and Yorkshire brack cake using the self service system. The rain got really heavy and we were delighted to be kept warm and dry. Just as we were leaving the owner came out and apologised for not providing milk. However, we had our own flasks. Well worth a visit and the rain now stopped!

We followed the Daleside Road to Thorgill and Rosedale Abbey.

Sid the Yorkshireman used to be a pig farmer and using his pig whispering skills was  able to get this beauty into the perfect pose for a photograph.

On the opposite side of the valley were the old ironstone kilns. 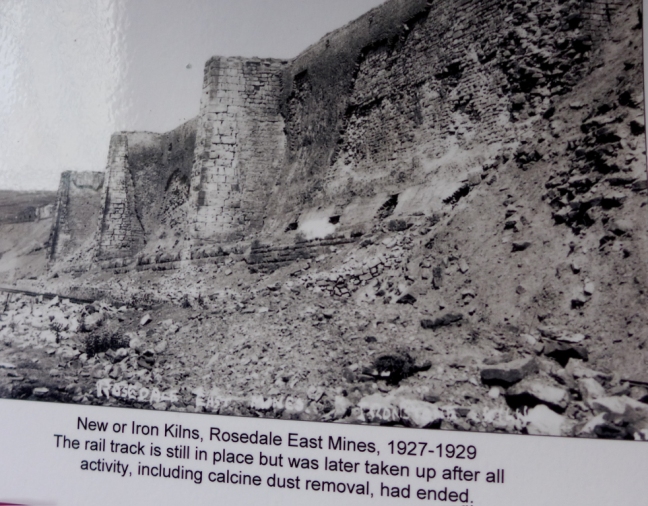 We arrived at the church of St Mary and St Lawrence in Rosedale Abbey. The only remains of the priory is the  staircase below right. 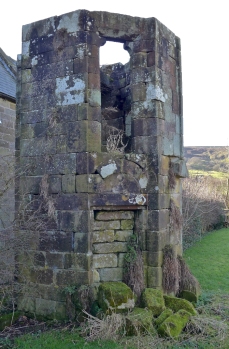 The sun was out and it was time for lunch on a bench in the churchyard.

We could ponder on the artwork of children in the church, relating their memories of the Tour de Yorkshire. Bicycles still adorn buildings in the village.

We then had to climb out of Rosedale Abbey towards Thorgill Bank with ever changing images of Rosedale, one of my favourite valleys, brought alive by afternoon winter sun. 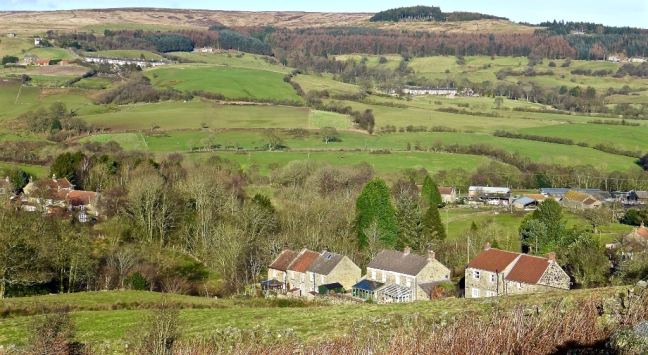 Some farms on higher ground have fallen into disuse.

The path became boggy and for the second time this winter (third time ever), due to lack of concentration and tiredness, I ended up going into a bog up to one knee. Fortunately the other leg was on firm ground.

We were pleased to get on the higher drier heather.

We arrived at the remains of Sheriff’s Pit, where the pithead operated from near the mine managers house and pit shaft.

The shaft was excavated in 1857 to provide a quick and easy way of transporting ironstone from the West Mines up to the railway line on the side of Blakey Ridge. It descends 270 feet to link up with a 1500 foot long level that was cut into the West Mines to the north of Thorgill.

All that remained now was to walk a couple of miles back to the car along the dismantled railway line and enjoy the fabulous mid afternoon views as the sun dropped low in the sky to give great photographic conditions. Relax – sit back and enjoy the slideshow. 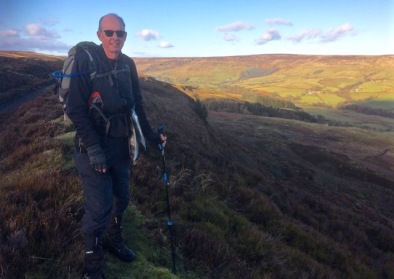 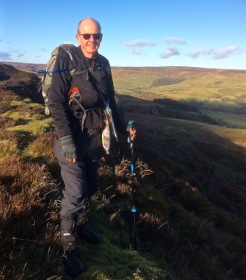 Now where was that Dale Head Cafe when you are ready for a cup of tea? Oh damn its there on the other side of the valley below the trees!!!

Finally, I imagine the conversation of the sheep below us went something like this: