Earlier in the week BBC Look North weather forecaster Paul Hudson got the forecast wrong and now it was the turn of  Owain Wyn Evans who forecast good weather and it rained most of the day. Bring back Keeley Donovan I say. We suspect the rain is why Alf cried off through illness and we are still waiting for the medical note to arrive to explain his absence.

Afte parking at the remote Highwood Brow Viewpoint and walking along the Tabular Hills route westwards we had a diversion to the Raptor Viewpoint. We half expected dinosaur birds to come swooping down, but were disappointed on this occasion. 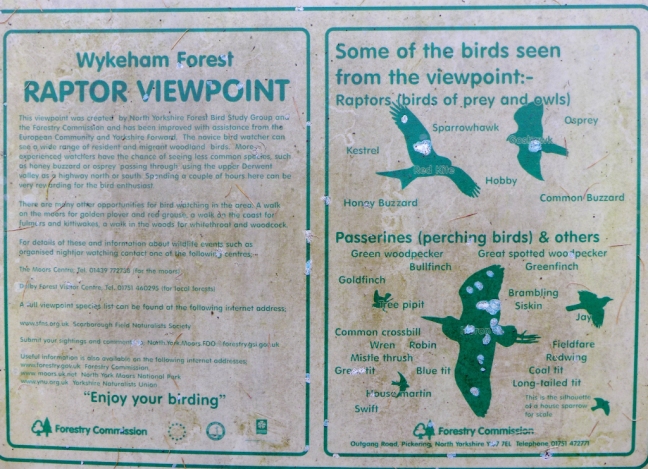 Sid the Yorkshireman on the look out for raptors. 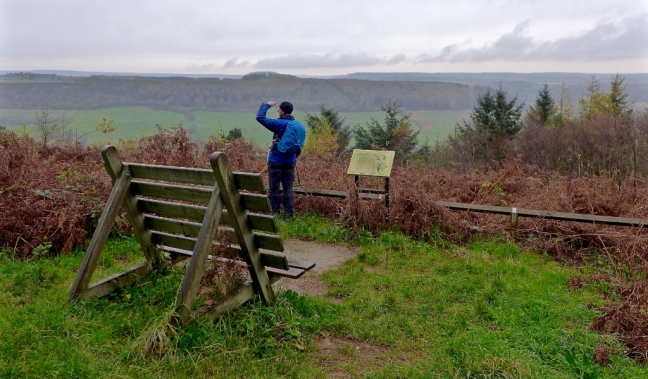 We continued along the Tabular Hills walk and were repeatedly passed by a mountain biker covered in mud. There must be stunning views on a clear day! 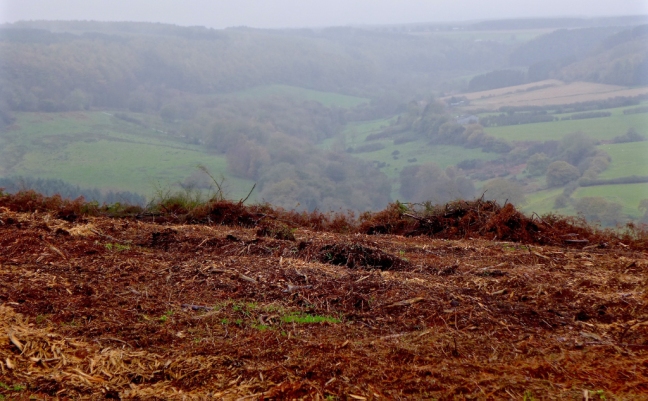 It continued to rain and it was rather dreary most of the time. 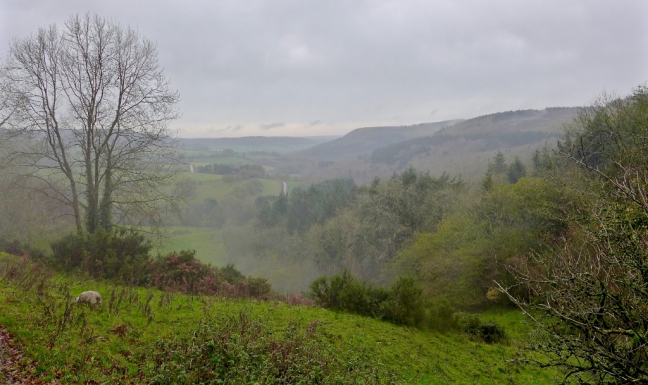 Near Cockmoor Plantation we descended to Keeper’s Cottage to find a carpet delivery van stuck after taking a wrong turning (sat nav problems?). 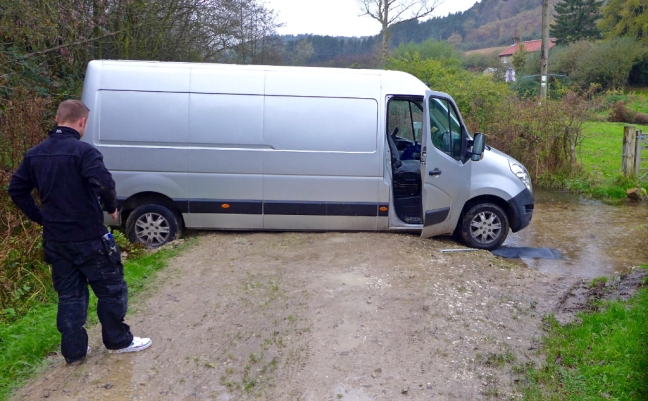 The COT COMBO team of Sid the Yorkshireman and myself then leapt into action (we have replaced both the AA and the A-Team). We managed to push it out with superhuman strength and, as can be seen, they were very pleased. 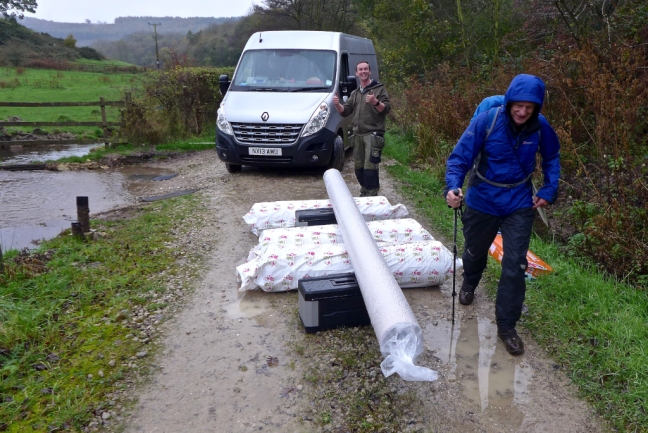 Heading up from there we came across Broad Head Farm, which sells beef and lamb.

Further on along New Road we came across some fungi.

For the second time this week we stopped at Crosscliff Viewpoint for lunch and some cyclists again passed us. We were now back on my North of England Way.

Just a little further along heading eastwards we had fine views where the trees had been cleared, including of Red House, which used to be a youth hostel.

We passed some slugs in the slow lane of life.

After passing a bridleway it became apparent, when we reached a bench on a sharp bend, that the Forestry Commission have closed a path that was previously used by the North of England Way and the Cleveland Way Missing Link. Therefore, it was necessary to backtrack to the very muddy bridleway and use that to descend to Noodle Farm. 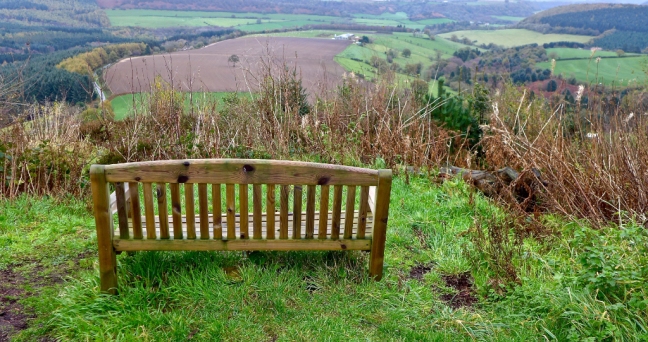 On the bridleway we passed a blue man sign which marks a 16 mile walk developed by the Forestry Commission  from Broxa to Allerston.

After Noodle Farm we passed Blackwood Bungalow and headed to Bickley Rigg Farm.  I was glad these rather boisterous cows were on the other side of the fence.

At Bickley Rigg Farm we passed some unusual accommodation

There were fine views towards Langdale End and Hackness. 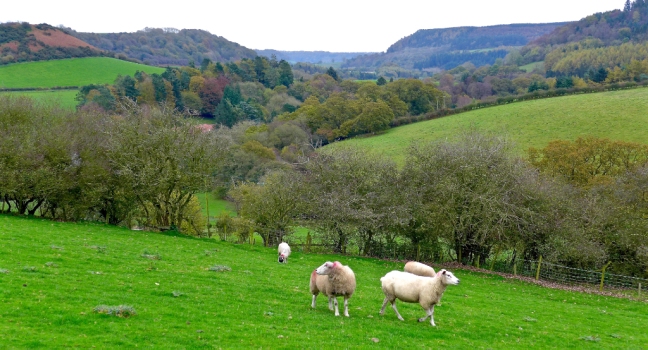 We passed a building still under construction. It is the Uk’s first Coptic Monastery. It is a Worldwide Christian Church, whose heartland is Egypt.

The monks follow a strict life of fasting and prayer, which begins at 5am. It is an austere and celibate life of prayer, contemplation and self sufficiency.  I can’t really see Steve the Yorkshireman and myself signing up. We have too much walking to do. Also I think we would have trouble with the other abstinences.

We arrived at the Moorcock Inn, Langdale End  to find two fine cars parked up. 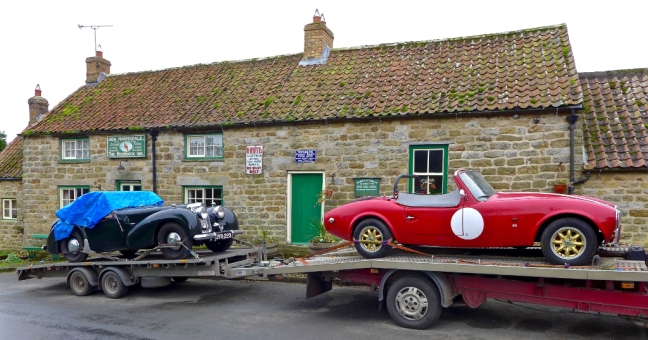 The delightful church was passed.

We left the North of England Way at Bridge Farm and ascended steeply.

On arrival at a gate I pulled on the handle sharply to find it was faulty and the metal top banged sharply into my head, just above my eye. I let out a few expletives before digging in my rucksack for the first aid kit to put a plaster on a bleeding wound.

We then reached a cycle path called the Moor Road, which ascends steeply from a height of 70 metres (230 feet) to 208 metres (682 feet). There was soon some heavy breathing as we had decided to attack our last hill (see video in Facebook comments).

After Sid the Yorkshireman had issued the immortal words:

‘It’s almost as if they have had cars down here’

We came across this!

If that wasn’t bad enough I then thought i had lost my fit-bit before remembering by mistake I had left it at home on charge. That’s 30,300 steps not recorded on it!

My Mapmywalk recorded the following: