Post 186: 5 September 2017, York Minster, A Walk along the Medieval Walls of York and The New Walk to the Millennium Bridge.

As we came out of Mannion’s Cafe there was some improvement in the weather as we passed York Minster, towards the start of our walk.

A good starting point for todays walk would be Simon Mattam’s very detailed guide book to the 700 year old walls. A Walking Guide to York’s City Wall, first published by Ebor publishing in 2004.

The guide was written for Friends of York Walls.  The walls are fairly easy to follow without the guide and there are pavement studs marking the trail.

Built in ‘the Middle Ages‘ which began 900 years ago and lasted until about  500 years ago, the walls have survived the introduction of the canon, the English Civil War in the 1640s and 200 years ago a battle to knock them down for better traffic flow and fresh air. During Victorian Times a compromise was reached so that only parts were opened up.

So why is a City walk included in my ‘best of 31 years of walking in Yorkshire condensed into 8 days?’

York still has most of the walls that surrounded the city 700 years ago, which is incredible. Many claim they give the best city walk  in Britain.

My walk for Victoria from Germany was a variation on this to also include the New Walk, which was a tree lined avenue created in the 1730s during the reign of George II following the River Ouse. With the opening of the Millennium Bridge in 2001 it is now possible to cross the river and return to the city on the opposite bank with a stop off at the delightfully situated Rowntrees Park Cafe.   Even in rain (but not floods!)  the combination of the two walks makes for a great introduction to York.

We joined the walls opposite the York Art Gallery under Bootham Bar: the former is well worth a visit in its own right. There is so much to see in York!

It was just after 1pm.

The steps to the walls are near a plaque.

The great thing about starting the walk here is that you soon get some of the best views of York Minster. 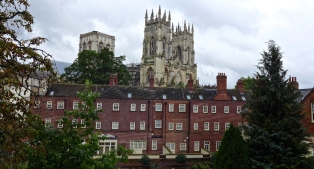 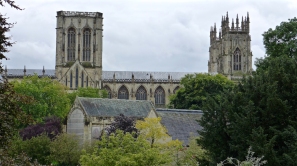 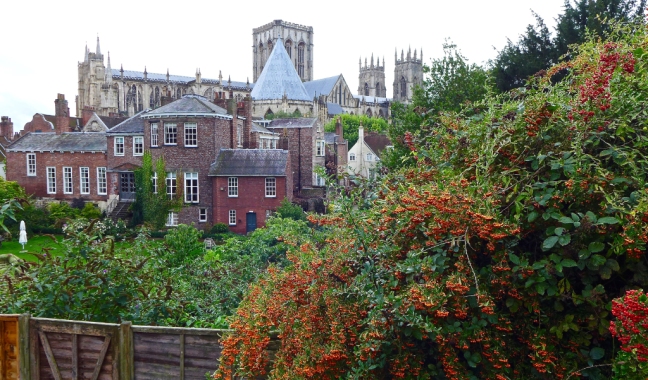 Eventually we reached Monk Bar where there is a little museum.

Here we descended the steps. If you are tall like me watch your head!

We ascended more steps to the Ice House, which was made around 1800 and filled with ice so that it could be used for the rest of the year for iced foods and drinks.

An information board gives details of the Roman Walls that  existed in AD 71.

We then pass the Merchant Taylor’s Hall. This was a guild hall and part of the trade association. In medieval York for example there were 128 master-tailors in 1386 when records began.

Between us and the Hall, archaeologists have cut into into inner ramparts and have left exposed a corner of a Roman Legionary fort.

We soon came to a plaque marked Jewbury, which was where medieval Jews buried their dead. There was a thriving community in 13th century York. All Jews were expelled from England in 1290 so they could no longer take care of their cemeteries. Archaeologists have discovered about 500 medieval graves and the skeletons hereabouts.

It was soon after this that we left the walls to head towards the start of the New Walk at Skeldergate Bridge. It is possible to continue along the walls to the bridge, but I prefer to head to Ouse Bridge, which gives the opportunity of seeing the Shambles and having a pint outside the famous Kings Arms in summer or inside in winter. Germans including   Victoria like a beer.

We then briefly followed the River Foss, before taking a left turning past student accommodation to Walmgate and Fossgate. 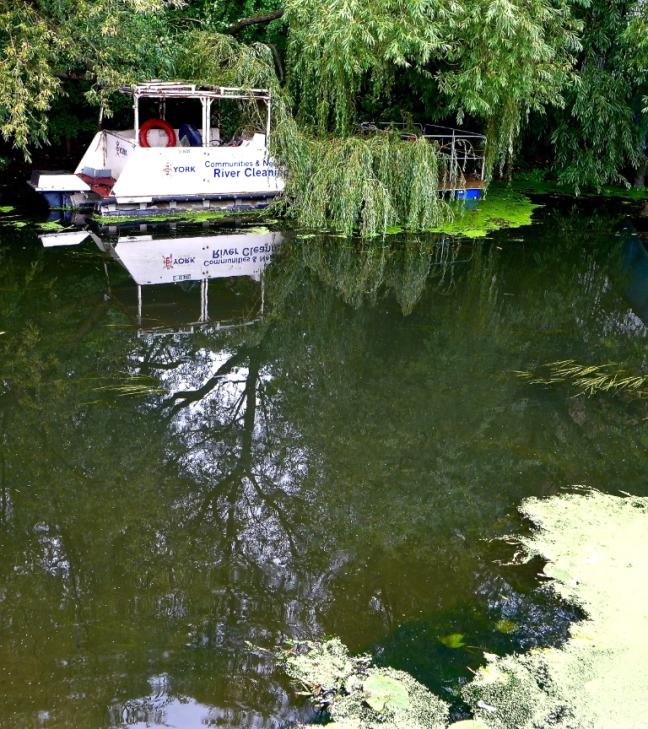 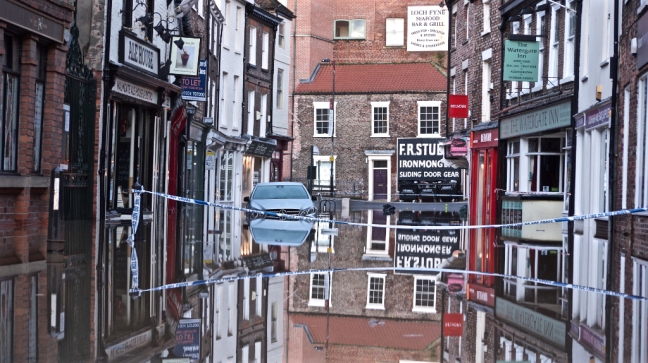 But today the sun was starting to come out and the flags were out.

And even the squirrels were out and about the city.

There are constant reminders of York’s historic past.

We passed the Shambles and the crowds. 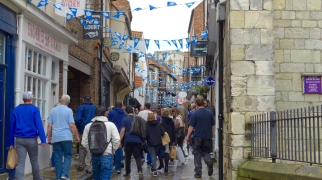 And the Harry Potter shop and its queues! But ssshhh… don’t name it. These are Secret Diaries.

We arrived at the Ouse Bridge, which looked a lot better than it did in 2015

And walked past the King’s Arms, which in 2015 was completely under water. Famous for surviving regular floods there are marks inside the pub showing the height of the water at times of different floods.

There were also a few problems in 2007 and 2012! The canoeists remained optimistic of a pint or two.

The route of our walk to Skeldergate Bridge is along the fence! 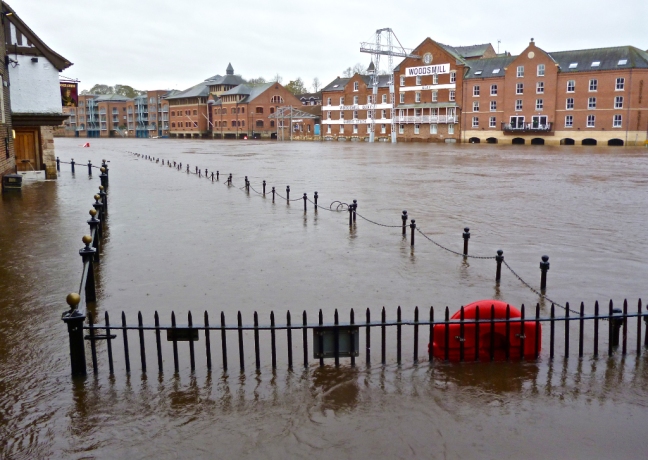 Deciding to wait for a coffee at Rowntrees Park instead of having a beer at the King’s Arms, we headed onto the start of the New Walk at Skeldergate Bridge.

Believe me the Walls and New Walk are delightful walks when there are no floods! You can never say York Walks are not exciting or full of interest, which is why they are included in my 8 days of the Best of Yorkshire!

Keep reading the next blogs for when the helicopters and canoe rescuers appear!