Arriving at Ripon for the final section of this long-distance walk, there was a sense of excitement and anticipation that a walk we had started on 25th May was nearly at an end. In addition, we had a meal booked at Gusto for the evening to celebrate Celia’s birthday, so a double celebration was in the offing.

I was somewhat surprised to see Carol had left and right socks and so did Sid the Yorkshireman. I had never seen these in over 60 years of walking. What is all that about?

Does Carol not know which her left and right feet are? Does she need a reminder so she can put her boots on the right foot (or left so as to speak).

After some questions on the 1,000 Mile Walking Challenge Facebook site, it seems there are loads of folks that use such socks!

So how come I have walked the equivalent of over 4 times around the World without them?

I reckon it is marketing ploy to get folks to pay more for their socks. Added value and all that.

Having lived in Yorkshire for some 31 years, I can see through these marketing ploys. All complaints please to Sid the Yorkshireman.

Now double lay socks (an inner sock within a sock) are a different matter and definitely stop one getting blisters. That’s where my money is going. In fact on the way to my Norwegian cruise I managed to pick up two pairs from the Port of Tyne for £7.99p. Now that’s a bargain! 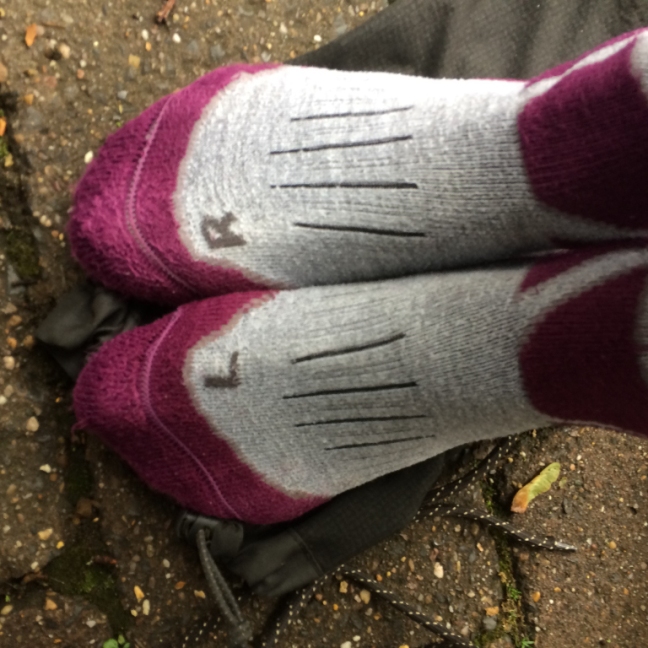 We now had to head to the bus stop to get a bus at 9.40am to North Stainley, the start of our walk, watching out for blind corners on the way. I had forgot my skateboard and bicycle on this occasion

Alighting from the bus (free for Sid the Yorkshireman and myself but not for Carol – a benefit of old age) we knew we were in the countryside as we met our first deer.

We then passed a large quarry. 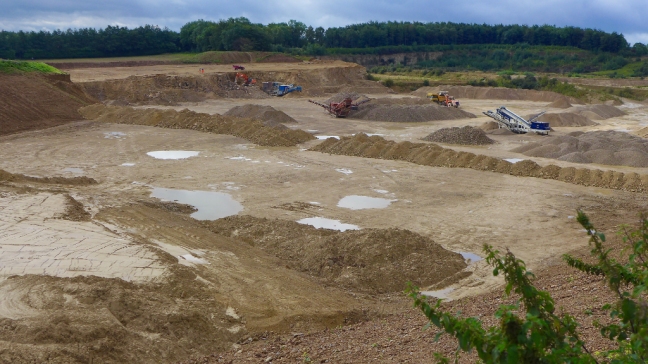 And a huge tree.

There were even North Yorkshire conveniences (for the quarry men).

Our path was redirected as they are enlarging the quarry.

This was a bale of hay trying to escape capture.

After taking a turning onto a bridleway at Frizer Hill we suddenly found ourselves looking at a lake that wasn’t on my map (the one on the right below). Latter we found it on Sid’s map (on the left below). 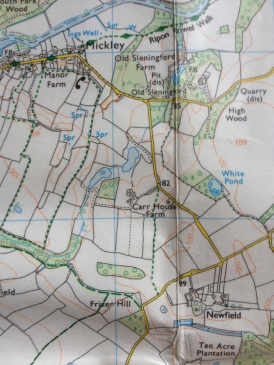 How can you have a lake go missing on the map?

After some pontificating and using my compass, we decided we had gone wrong and backtracked to where the last bridleway sign was. The sign and guidebook instructions were confusing to say the least. We had followed a clear track and missed an overgrown path on our left. The guide made no mention of a path off left. Hmmm……….

We did eventually find the path off left and were back on route. Of course to add to our frustrations and overheating, the path was badly overgrown for some distance. It was going to be a long day. 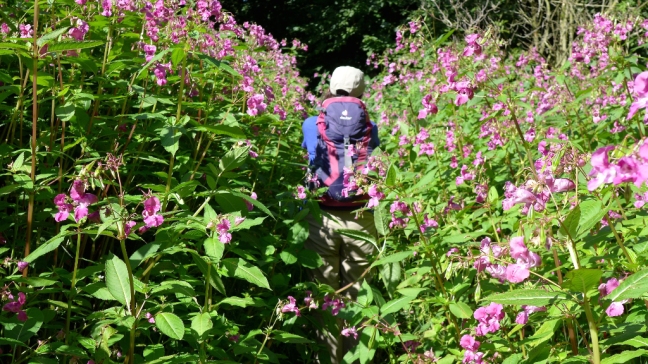 It was now 12.16pm and we hadn’t even had a banana and coffee break by the time we arrived at Mickley church. I decided to skip the coffee break and have lunch instead. 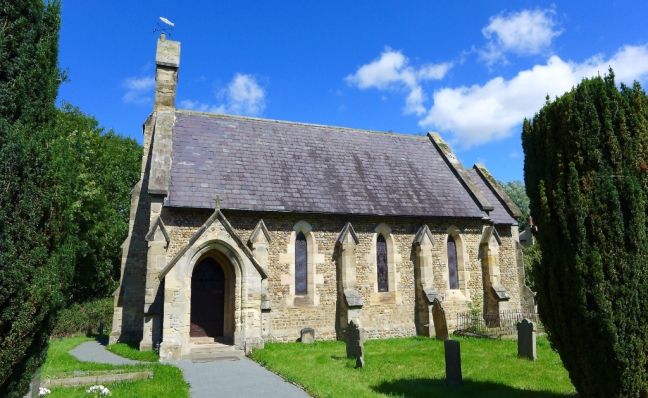 and the beautiful village of West Tanfield 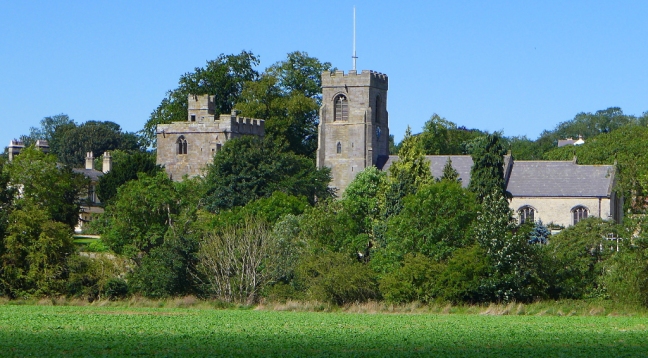 This brought back memories of the Tour de Yorkshire and where I had watched and filmed events from the bridge.

No bikes today and so it was back to the River Ure. 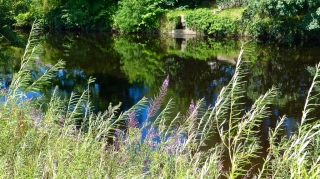 We arrived at North Stainley at after 2pm.

Sid and Carol were ready for their lunch and so we stopped at the cricket ground.

An all English scene if ever there was one.

After lunch we soon had to enter a military zone but failed to encounter any tanks or such like.

Afte some fast walking we arrived back at the historical area of Ripon near the Cathedral at 4pm – pretty tired. 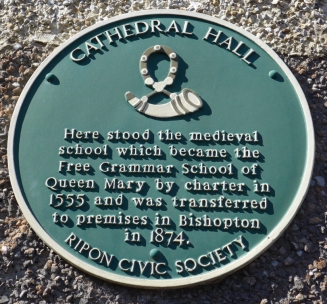 And the end of the walk at Ripon Cathedral 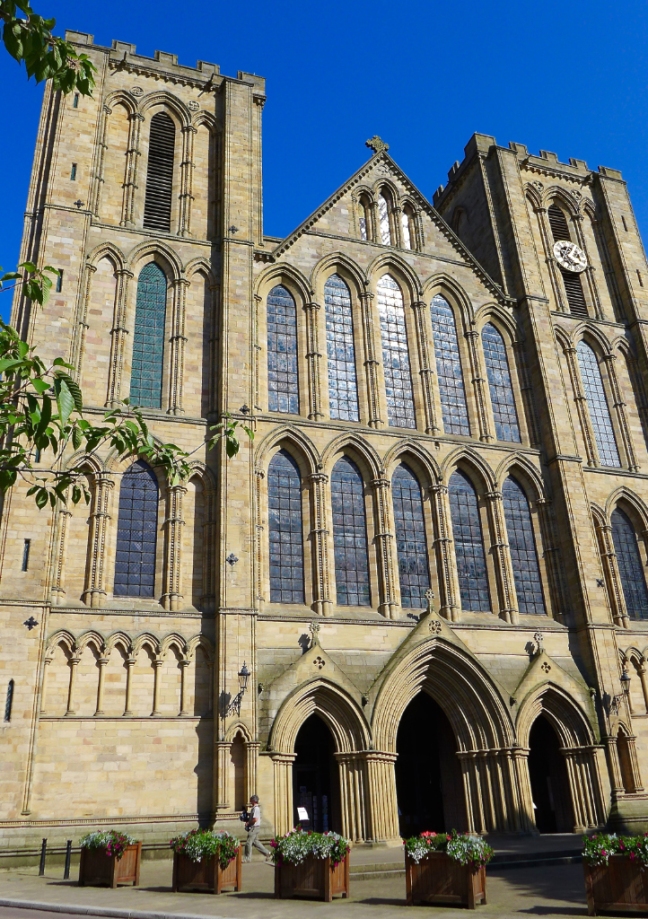 As we had a meal booked we couldn’t hang around for the horn-blowing at 9pm.

It was now time to wash my rucksack in the bath and hang it out to dry. I suspect the bath hole will be blocked now…………..

TOTAL MILEAGE ON THE RIPON ROWELL CIRCLES 126. (RIPON ROWEL ONLY IS 50 MILES).