The forecast was for light, very occasional, showers so it was a surprise when we parked the car on a grass verge near Kirkby Malzeard Moor as rain descended. We decided to put on our waterproof trousers and jackets from the start. They were not to come off until well near the end of the walk. Some shower! The donkeys were not impressed at Kendall Bank Farm.

We soon passed a couple of mosaics, which signalled we were back on the Crackpots Trail (see blog 155 for further details)

Arriving at the tiny hamlet of Greygarth, we were surprised to come across a delightful Gothic style Wensleyan Chapel, built in 1885. They must have been very religious in this remote area to build such a grand chapel in such a small remote hamlet.

John Wesley lived from 1703 to 1791 and was the 15th of 19 children born to Samuel Wesley, Rector of Epwoth. His ‘Field Preaching’ was a feature of Methodism and there were plenty of fields to choose from around here. He discouraged people from drinking and gambling.

In 1774 Mary Barritt, a travelling preacher from Colne, came to preach in this area at Dallowgill. The first chapel measured 9 yards by 6.5 yards. In 1841 there were 8 households in Greygarth. The land for the 1885 new Chapel was bought for £3. In the 1920’s a preacher Mrs J. Rayner would walk from Ripon about 8 miles away to preach and then walk back.

A tribute to Dallowgill Chapel printed in the Ripon Gazette in 1985, to celebrate the 100 years since opening, seemed appropriate today:

Four square to all the winds that blow,

And all the rain which falls,

How sweet those hallowed walls

Westward the windows still look out

While to the east, a vista fair,

Of farmyard joys and hopes………

The rain was coming down quite heavily by now and even the curlews looked fed up. Note the small bird to the right of the wall – two birds for the price of one.

After passing Dallowgill Church and Dallowgill Outdoor Centre, both in some neglect, we entered a wood which needed careful navigation in order to find the route to Dallow Hall.

Before passing a beer and wellington mosaic.

We then reached the same narrow lane which the previous week the tiny frogs had been migrating over. They were still hopping over the lane! 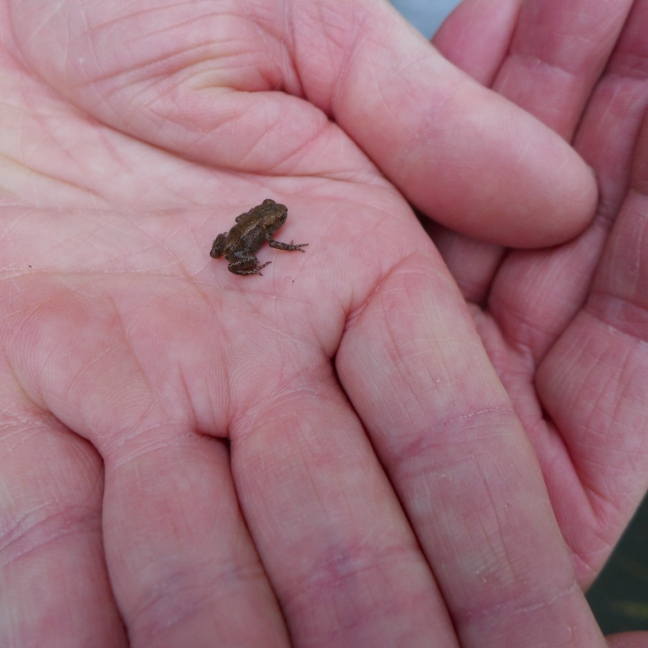 After returning to the car after seven miles of walking on walk 5, we then started walk 6 to pass a series of mosaics. One had a cow which was to prove prophetic. 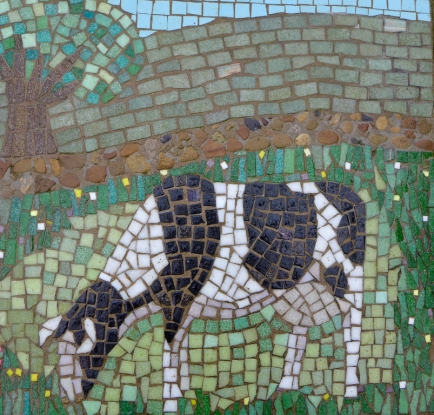 After passing a sighting tower

We stopped for a midge accompanied lunch by Ellershaw Gill before crossing Stock Beck.  It was the first time this year we had been surrounded by midges and flies. Not pleasant. It was good to get walking and onto open land again to get away from them.

However, it was entering a huge field with a ‘Bulls’ sign that came as a bit of a shock. As we walked on the right of way, a large number of heifers and a bull came towards us to try and cut our route off. The quicker we walked the quicker they walked. In over 60 years of walking I have never known such intimidating and aggressive cows. However, we managed to get through to the next field thinking we had escaped. But no, these cows had other ideas. They followed us into the next large field. Our route was away from the fence diagonally across the second field to a gate. The cows started to head towards the gate and surround us so there would be no escape.

Somehow we managed to get through the gate to safety.

Having not seen any other walkers all day, we did wonder whether the cows were not used to walkers.