The forecast for the morning was poor and we needed to get back to York for appointments fairly early in the afternoon. We therefore decided to set out at 7.30am and do a fairly local walk starting at Thixendale, which is on the Wolds Way and the Centenary Way.  I had completed the former in 2002 and the latter in 2004.

We started off with low expectations, expecting to only walk about 8 miles return to the deserted Medieval village of Wharram Percy. I was recovering from a virus and sore throat the previous weekend and so this would suit me.

A bit like the recent election, as for any Labour supporter, the low expectations were exceeded.

We climbed the hill on the Wolds Way from Thixendale to view what has now become known ‘Hockney Country’. The now world renown painter David Hockney has frequently painted in this area and captures the feel and atmosphere of the Wolds in his unique style. 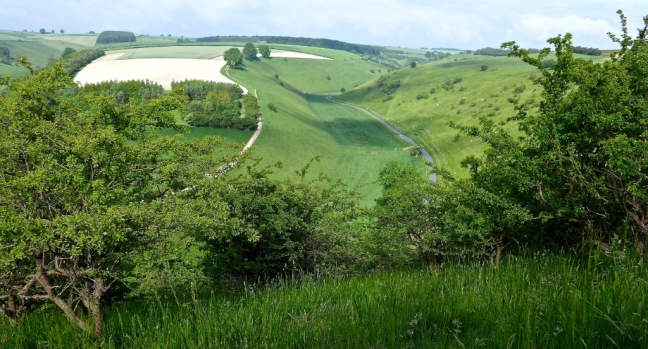 The Wolds Way runs 79 miles from Hessle near Hull to Filey and is one of the quietest, if not the quietest, National Trails in the country. On this day we were to see no other walkers.

However, skylarks, lapwings and house martins kept us company.

We arrived at Wharram Percy where there used to be a medieval village.

The pond is still there and there are more recent church remains. In recent years a bench has been added, which makes it a delightful spot for a coffee and banana break.

As there was no sign of rain we decided to pick up the Centenary Way for our return journey and continue to North Grimston and Birdsall,  before climbing after lunch to Birdsall Brow.

Then it was past the fields of wheat not like Theresa May who recently confessed to running through them, albeit as a child.

We were soon passing potato crops of very neat and artistic lines.

Before getting back to ‘Hockney Country’.

To finish back at the village of Thixendale.