The Coastliner Way is a new long-distance walk developed by John Eckersley, outlining a series of walks from Leeds to Whitby, Scarborough or Filey/Bridlington. Each leg of the walk starts or finishes at a Coastliner bus stop and averages about 7 miles long. Total distances add up to about 170 miles. Further details of the walk and other walking books by John can be found at his website:

We decided to walk the last two sections 14 and 15 from Goathland to Whitby on this, the launch day of the walk. Now of course this was nothing to do with the prospect of fish and chips at Whitby! We felt these sections have some of the best Yorkshire scenery on offer. We were not to be disappointed.

We started walking from the National Park car park in Goathland at 9.00am. We soon crossed the North Yorkshire Moors Railway line at the station and began ascending onto the moors.

There were fine views back towards Goathland and there were curlews and lapwings hereabouts. 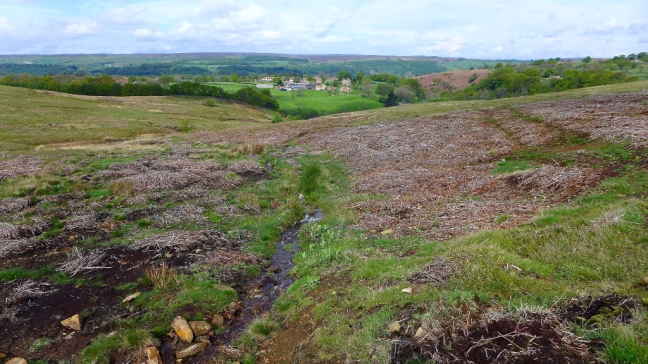 A boundary stone dated 1784 was passed just after Whinstone Ridge. It was engraved Sneaton Liberty. The pylons in the background are, we believe, to be demolished at some point to improve the view across the moorland.

We descended to Midge Hall where we stopped for our coffee and banana break. We were joined by a robin, which we soon had eating off the top of Sid the Yorkshireman’s hat (see video on Facebook). 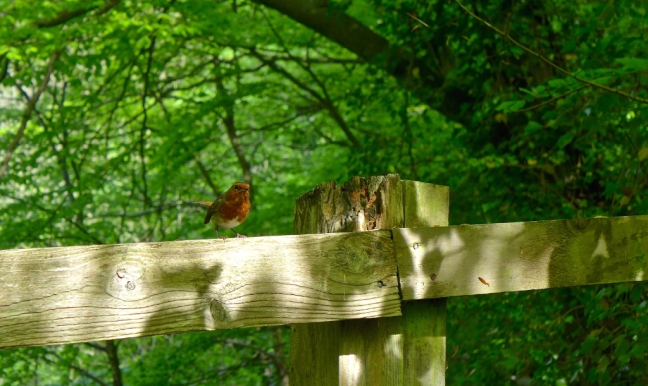 We were now on Alfred Wainwright’s Coast to Coast Walk, but walking in the opposite direction to most coast to coaster’s who were on their last day from St Bees to Robin Hood’s Bay. We passed a number of such walkers, including some with American/Canadian accents. They all indicated they had enjoyed their challenging walk.

Falling Foss next to Midge Hall was a delight. Wainwright describes the area up to and including the hamlet Littlebeck as:

‘…a miniature Arcadia embowered in trees, a glimpse of heaven for nerve-frayed town-dwellers.’ 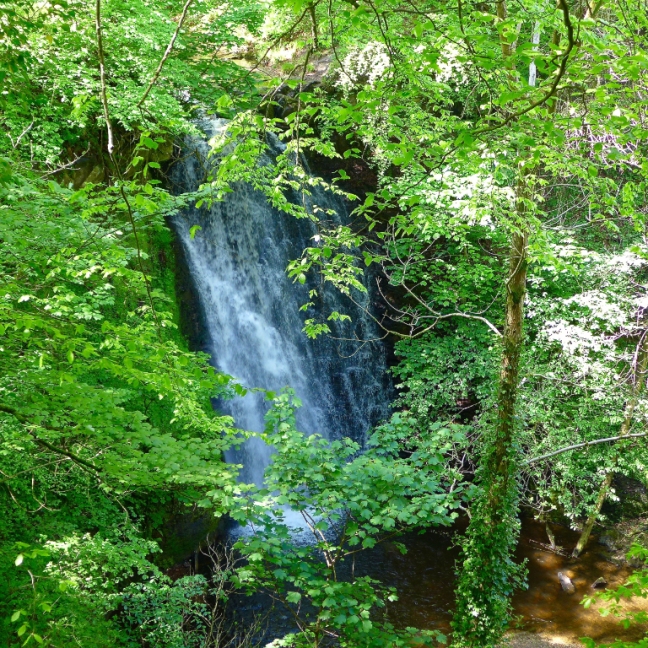 Before Littlebeck we arrived at a huge boulder called ‘The Hermitage’. It has seats and is inscribed The Hermitage, the year 1790 and the initials G.C. 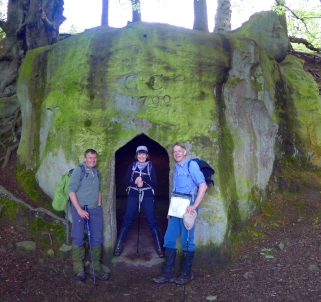 As you can see in this picture below taken on coast to coast in 1991, I haven’t changed a bit but the hermitage is a lot greener! I don’t look too worn out considering I had walked 179 miles from St Bees through rain and storms to get to the Hermitage. It was near here that I later met a father and son walking Wainwright’s coast to coast for the third time and there and then decided to plan and write my own coast to coast walk, The North of England Way. The rest is history…….

After passing through the hamlet of Littlebeck, we ascended the road leaving Wainwright’s coast to coast before running parallel with Little Beck. The smell of wild garlic was overpowering and if we had stayed I suspect we might have got ‘high’ on it. 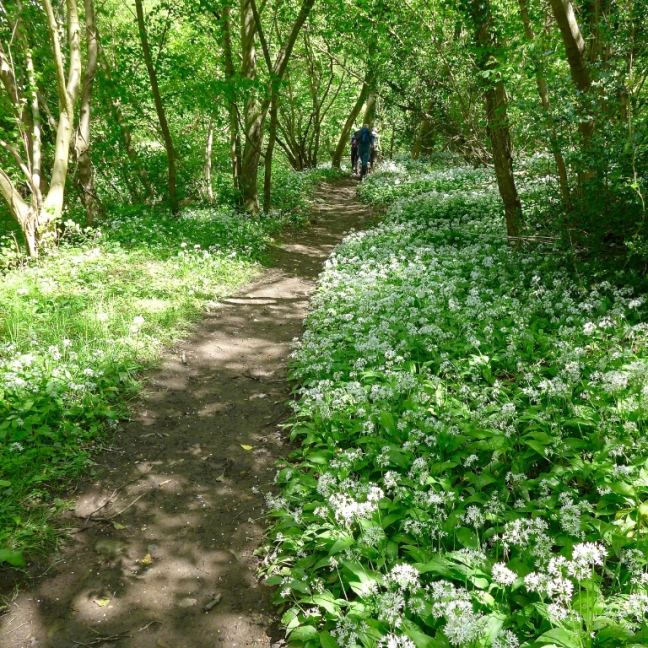 We stopped at Sleights station for lunch and were rewarded with a North Yorkshire Moors steam train passing through.

After Sleights, we joined the 80 mile Eskdale Way, which I completed in 2012.  It starts and finishes in Whitby and circuits across the Moors to near Guisborough and Baysdale Abbey. 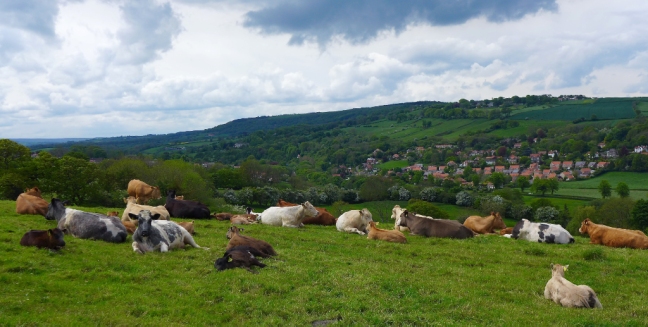 Whitby Abbey the end of our walk came into view in the far distance. Despite a forecast of showers, the weather was holding up with bright warm sunshine.

We arrived in Whitby to unexpectedly come across some friends of Sid and Carol’s who were on a school reunion! One was over from Australia and was planning to continue parts of Wainwright’s Coast to Coast.

What a small world we live in these days. As shown on the bridge it is a case of WHERE IT WILL TAKE YOU.

Walking through Pannett Park we were accosted by an alligator. 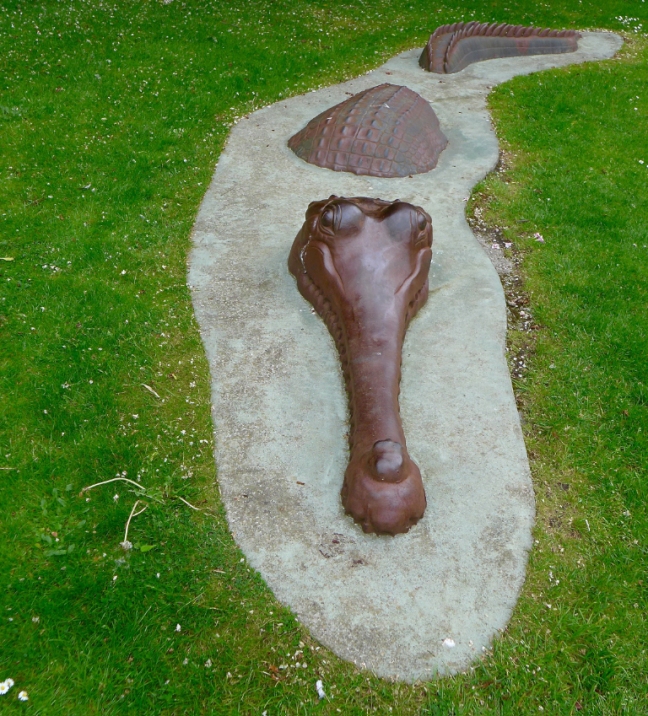 But survived to reach Whitby Abbey, the end of a fine and enjoyable walk.

Now it was off for fish and chips and then to catch the Coastliner bus back to Goathland. Even better, three of us had bus passes. Poor Carol had to pay! With hindsight we should have had a collection for Carol. But the walk was for Christian Aid so we will be donating there!

It started raining just as we started having fish and chips!

Average Pace 19.12 (but that included the fish and chip shop)