Next morning, the day of the christening, we crawled out of our bunks to get to breakfast. When most of the party were seated, two suited gentlemen entered the room to loud cheers. It is the first and only time I have seen anyone in a suit and tie in a hostel. Whilst the christening party left to a nearby church, we headed in the direction of Horton-in Ribblesdale.

A steep ascent from Stainforth along the Ribble Way led to the Moor Head Lane, with splendid views ahead of Pen-y-ghent. By skirting it to the west and north we are able to obtain fine views of its great prominence above the surrounding landscape. Of the ‘Three Peaks of Yorkshire’, Pen-y-ghent is the most distinctive in shape but the lowest in height. It was near Pen-y-ghent that I once met a German lady who told me about the time she was walking near Manchester and was bitten by an Alsatian dog. She even had the scars to prove it. I advised her to carry a dog-dazzer which, as previously described, lets out a loud shrieking noise to scare the violent dogs away, although protection is not guaranteed. I used one until I found out it also frightens horses and makes them stampede.

We descended to the River Ribble and followed it to Horton in Ribblesdale, a focal point for walkers and potholers (photographs taken later).

This walk so far warranted a refreshment stop in the Pen-y-ghent Café, the start and finish of the famous ‘Three Peaks of Yorkshire’ challenge walk.

One of the main attractions of Horton is its medieval 15th-century perpendicular style church dedicated to St Oswald. The church also has notable Norman features in the south door and the font. St Oswald was converted to Christianity on Iona and died in AD642.

Leaving the warm confines of the café, we climbed the track over Horton Scar to the massive chasm of Hull Pot. 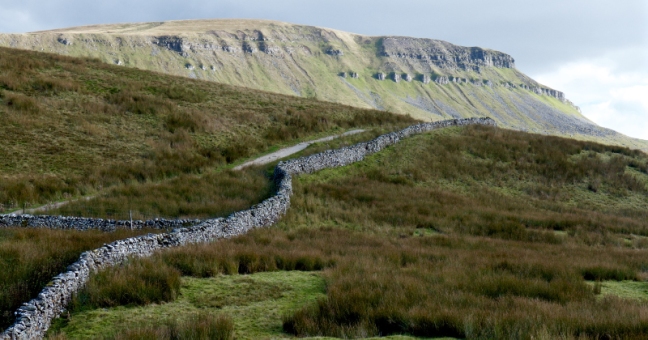 This huge chasm is the biggest natural ground opening in the country, measuring 300 feet in length and 60 feet in width and depth. The chasm marks part of a strata of permeable Carboniferous Limestone to be found in this area at about 1250-1300 feet. It is fed by a stream, which normally sinks into the ground before reaching Hull Pot to re-appear under the floor but, after heavy rain, continues to the edge to form a waterfall; occasionally, after exceptionally heavy rain, it has filled the chasm. Fall down there and you never get out again.

Continuing to the open expanses of Foxup Moor, we were devastated to find that motor-cross bikes had turned areas of Special Scientific Interest into quagmires of mud. Indeed, while we proceeded, the bikes were churning peat and moss high into the air as their wheels spun in anger. It was a moment of despair and the only consolation was seeing one of the bikes sink irretrievably into a peat bog, never to churn up the rare habitat again. We later came across National Park rangers and reported the incident to them. One hopes the National Parks will be able to find the means to protect these areas. Although walkers can cause some erosion damage, such widespread destruction as caused by these bikes does not occur.

It was with relief that we descended into Littondale, a valley of great calm and beauty. At ten miles Halton Gill made a sheltered and pleasant spot for a packed lunch, before climbing the Horse Head Pass which rises to over 1900 feet. One way of deciding if you are a ‘New Man’ is to climb the Horse Head Pass. It is guaranteed to get the heart beating and test your fitness.

An exciting descent into Wharfedale, with views ahead of Buckden Pike, led us to the Norse settlement of Yockenthwaite, from where the River Wharfe was followed to Hubberholme village, with its fine church and inn. The church, dedicated to St Michael and All Angels, is the parish church of the Upper Dale, but originated as a forest chapel and, after the Dissolution of the Monasteries, was served by curates from Arncliffe in Littondale. The interior is worth seeing as it has a rood-loft of 1558, one of only two in Yorkshire, carved in oak, painted red, black and gold. Almost all the woodwork in the church is modern oak, made by Robert Thompson of Kilburn in 1934 and his signature, a tiny mouse, can be discreetly identified on many of the pieces. There is also a plaque dedicated to the author and dramatist J. B. Priestley O.M. (1894-1984) whose ashes are buried nearby. He loved the Dales and found Hubberholme to be one of the smallest and pleasantest places in the world. I have to agree with him.

The George Inn used to be the vicarage, remaining church property until 1965. Each New Year’s Day there is the letting of ‘Poor Pasture’, a custom almost 1000 years old, when farmers bid for the tenancy of a 16-acre field behind the inn; the proceeds go to help the elderly people of the village.

A further mile and a half of easy walking led us to the delightful village of Buckden. In the medieval period Buckden was a ‘forester’s village’, being one of a number villages on the edge of a large hunting forest. Nestled below fells, including Buckden Pike (2303 feet) to the north-east, and situated alongside the River Wharfe, Buckden has become popular with tourists, cavers and walkers intent on exploring the higher reaches of Wharfedale.

My ‘new’ walking boots were causing me agony, the top of my big toe had lost all its skin and my foot was starting to swell up. There was only one thing to do and that was to take painkillers. So we popped into Buckden for a meal followed by a visit to the Buck Inn; Guinness would surely remedy my swollen foot? Arriving back at the bed and breakfast, I realised my foot had swollen to twice its normal size. Had gangrene set in? Was this the end of my walk? As a last resort, I adopted the ‘Dales Way technique’ involving keeping the foot as high in the air as possible. When you are asleep this can be difficult but by adept use of blankets and pillows I succeeded and in the morning, by a miracle, blood had been drained from the foot and it was back to its normal size. After a quick dressing of Compeed on the bare skin, I was almost one hundred per cent and the walk was back on again.