At last my new boots seem to be loosening up after a 3-mile walk everyday for a week. Always walk new boots in before doing any serious walking.

Help, my new boots are crippling me – so much for loosening up. They have even bruised my foot. Mind you with feet that have toes shaped like the Pepsi Max in Blackpool it’s not surprising that the boots are causing a few problems. I think it’s another inherited trait.

I often seem to have some sort of ache or pain after Christmas; it seems to be part of the challenge of trying to get fit for my annual Easter long-distance walk. It could be the body rebelling against an increased fitness regime after the Christmas indulgence or it could be psychosomatic – a worry in the subconscious about the prospect of walking 130 miles. Whatever the cause, the spring weather soon heals any aches and pains and, after increasing my pack weight to 30lbs, whilst taking the dog in the morning, at Easter I’m raring to go.

The Department of Health are spending £9 million on promoting activities to get people fit and healthy, of which walking seems to be the main activity. It has been suggested that Doctors be issued with walking guides of up to 3 miles to issue to patients who might benefit from walking exercise. I wonder if we could get long-distance walks on the National Health? My Doctor will be delighted, as if you go to him with a bad leg or foot and ask if it alright to walk 200-miles, he says ‘yes, nothing better.’ He then goes on to tell you about the time he was horizontal in the Cairngorms due to high winds, only progressing by crawling with the aid of an ice-axe. 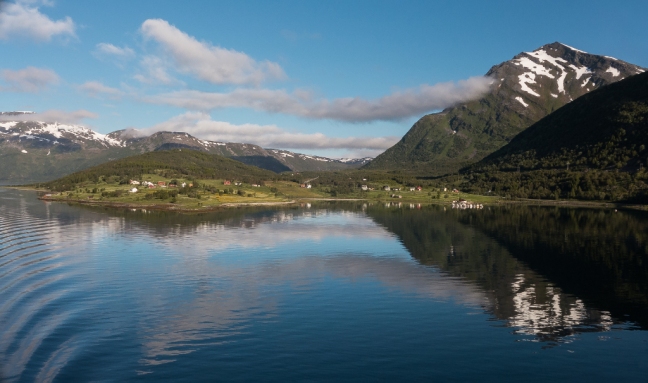 This focussed my mind as I now have a bus pass and have one or two creaks.

So I am well aware that despite the Department of Health’s expenditure in 1997, I may one day not be able to get out for my long walks.

According to the world’s greatest living explorer Sir Ranulph Fiennes in his book Fit for Life, published in 1998, arthritis has been around for over 50,000 years, as evidence has been found in the bones of old Neanderthal cave dwellers. It is also the most common disease and is caused by inflation of the joints due to a surplus of uric acid in the body.

Now I haven’t been around quite that long but I have been diagnosed with early arthritis in a hip and in my hands. I first noticed it in 2011, just before I was due to walk the Peddar’s Way with a mileage of 19/20 on a number of the days.

One friend of mine had it so bad she had to have morphine until a hip replacement operation could take place. Indeed on odd occasions whilst relaxed in bed I have had sharp pains that if it continued would have me crying out for morphine.

So what to do?  The worst thing is to reduce mobility. If you don’t use it you loose it. When arthritis was first diagnosed I went to see the Muscular Skeletal Scope Practitioner and when I told him I regularly walk over 10 miles, swim and go to the gym and do mobility exercises he was very pleased and said I was doing his job for him. Carry on.

Sir Ranulph Fiennes had arthritis at the ‘uncomfortable stage’, partly due to SAS and expedition injuries, and suggested, among a number of things, taking black molasses, dark honey and cider vinegar. His arthritis cleared up.

I have been taking these ghastly tasting products for a number of years now and with regular exercise it has enabled me to continue walking and managing the arthritis. In addition, I take Cod Liver Oil, OptiMSM and Glucosamine and Chondroitin tablets everyday. I have managed to avoid morphine so far!

Of course now I am aware as per the poem that I have a sell by date or use by date it (we all have). However, this enhances the appreciation and joy of each walk I now do.  It is no longer taken for granted. One advantage of retirement is that I can even choose sunny quiet days to walk, when many others are at work! Guess what I am doing tomorrow on a forecasted sunny warm March day?!

When the going gets tough you find out who you can rely on.

On mentioning I wanted to paint my Ordnance Survey column (trig pillar) ready for the grand opening on 6 March of my walk On Foot from Coast to Coast: The North of England Way, Gary and Alf suddenly found they had other commitments.

Penelope tried to use the excuse that she had her laundry to do but, to a ‘New Man’, who does nearly all the laundry, such an excuse was unacceptable.

It was a gorgeous, sunny, but fresh day when we arrived at the trig pillar. After wire brushing the dirty pillar to get the lichen and other deposits off, we then set about painting my adopted lump of concrete, with one of the finest views in England in the background – much better than painting the house. It took about three-quarters of an hour and used up much less paint than I imagined. On completion, it shone like a white beacon in the bright sunshine, then, after a photo call, 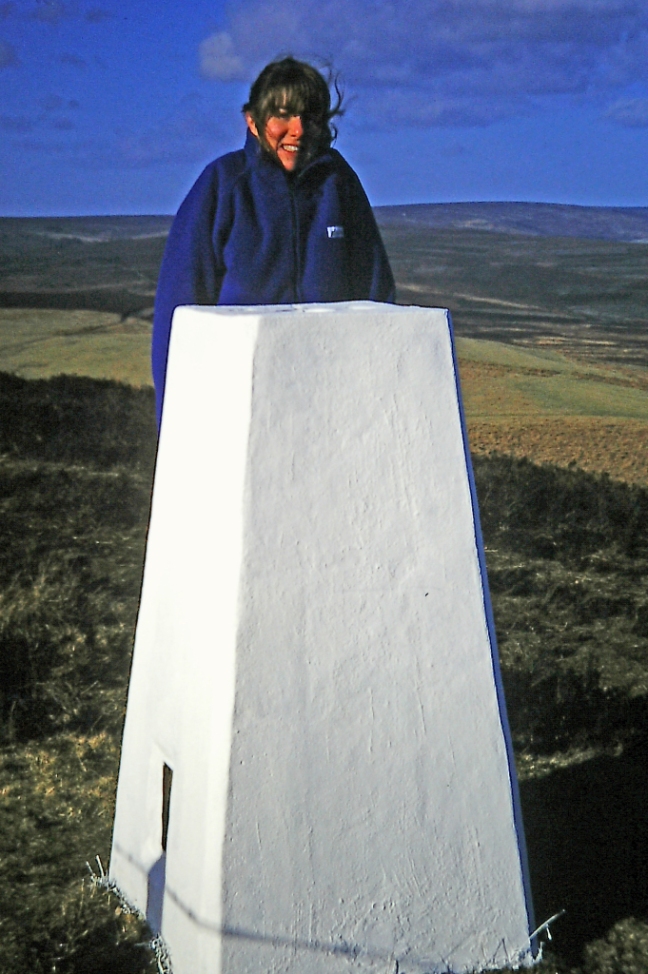 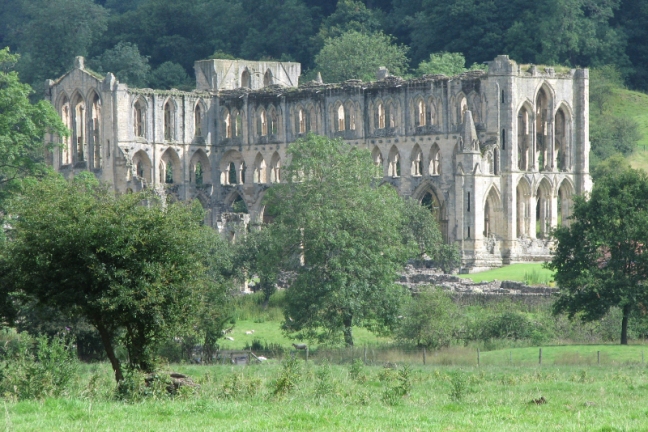 and finally Sutton Bank and the White Horse of Kilburn for stupendous views of the sun setting over the Yorkshire Dales and York, the latter over 40 miles away. This was a memorable day.

At last I received my first copies of my book On Foot from Coast to Coast – The North of England Way. I gave a signed one to Dick and he said in great excitement.

‘It’s the first time I’ve had my name in a book!’ I replied.

The day of my first press interview. Fortunately, the interviewer was a delightful young lady who put me at ease. She was impressed with the book, saying she would go walking tomorrow! Not sure if she did, but I did!

I have just had a list of Radio interviews for 6 March , Merseyside, York, Jersey, Stoke, and Cumbria, as well as a list of magazines doing interviews articles or reviews.

Interviewed by Radios Lancashire and Cleveland.