It is with some surprise that this is my 100th blog in The  Secret Diaries of a Long-distance Walker. When I started blogging in August 2015 I hadn’t a clue where it would lead; a bit like a long-distance walk. It is heartening to know that I am currently getting over 1,000 views of the blog each week.

I would like to particularly thank those whose showed encouragement in the early days and I think they know who they are. Secret Diaries will now take a rest for two to three weeks but will return in early February. By the time I return I will know after my big birthday on the 21st whether I am Viking, Anglo-Saxon, Irish or whatever, having had a DNA test.

My walking companion ‘Sid the Yorkshireman’ thinks the test may show that I am a criminal and may be put away. If he is correct then it could well be my last blog. Having said that, it might be possible to blog from prison, but I might get short of walking material. There is nothing like good friends to keep you grounded.

However, lets live in hope that I am not a criminal and in two to three weeks I will be back on the North York Moors and blogging again.

So leaving home at the ridiculous time of 7.30am in fairly thick mist and fog we headed out after trying to put Kildale, our destination, into my new Sat Nav. Now according to my Sat Nav it didn’t show up and therefore presumably doesn’t exist. I then remembered that I had been there a couple of times before, not least on The Samaratan Way.

So abandoning all this high tech support we decided to use our memories to find our way to Kildale, not helped by thick fog. However, as our motto is Adventure not Dementia we eventually arrived at Kildale just before 9.00am.

Starting walking at 9.15am we took a detour to the Church of St Cuthberts and St Gregory, Gregory being the Pope in Rome who sent in the first missionaries to England in 597 AD.

When the Vikings invaded in 793, Lindisfarne Monastery was sacked and again in 875 when it was abandoned. The surviving monks carried the coffin of Cuthbert to Yorkshire and wherever they stayed they erected a small chapel, including  one at Kildale. Eventually St Cuthbert was interned in a vault beneath the newly built Durham Cathedral. 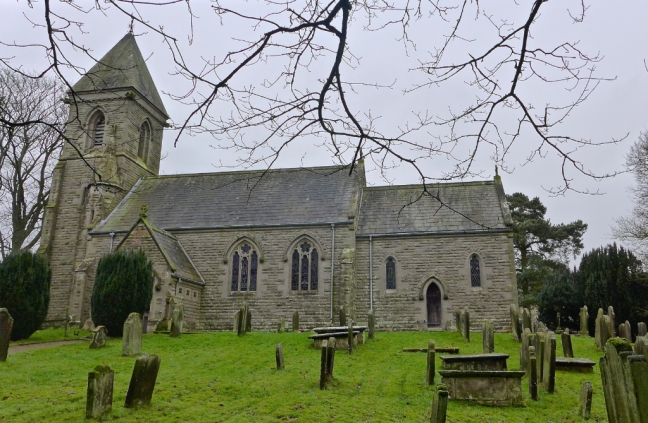 We were greeted by a couple of strange characters above the porch. 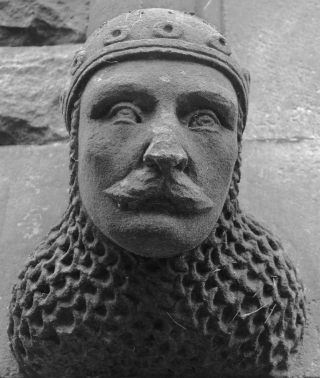 And then by some strange tombstones. When the church was being rebuilt in 1867-8 the floor was lifted to reveal a number of Danish (Viking) Burial artefacts, including a Viking sword, axe, and weighing scales. This pagan burial on a Christian site was very unusual.

An enthralling television series I have been following is The Last Kingdom, based on Bernard Cornwell’s book of the same name. It follows the Viking invasion of what is now the United Kingdom and the battles with King Alfred of Wessex. 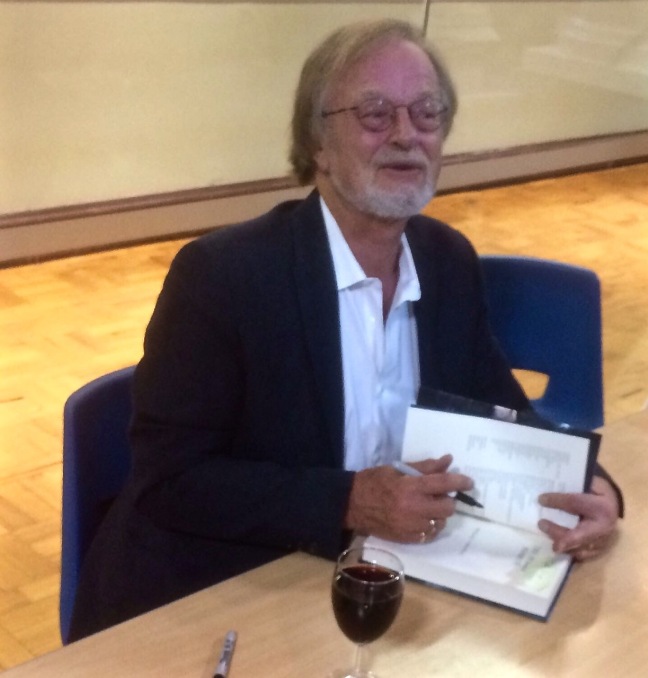 Fortunately, the great stone grave slabs survived and commemorate the Percy family with the Percy Arms. They are now in the porch. The one with an inscribed cross and sword suggests it is a Crusader’s tomb. 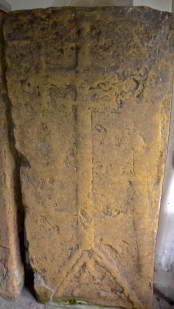 A book was on display in the church giving more information, and copies can be obtained from Mary Cook, 1 Station Road on the left just up from the church. When buying a copy of the book (buying good and interesting books is an incurable addiction of mine) I forgot to ask the lady whether she was a relative of Captain Cook!

After dropping the book back at the car, the serious walking began with a climb past Bankside Farm with fine views. 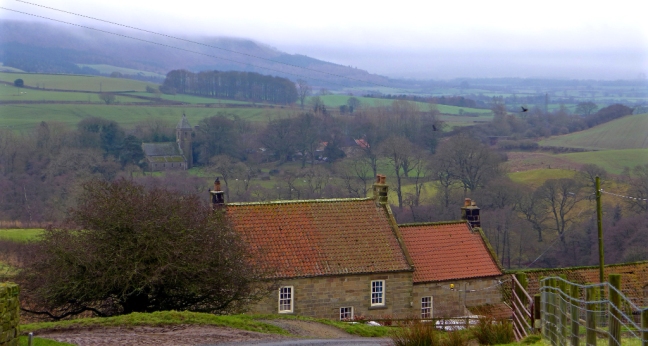 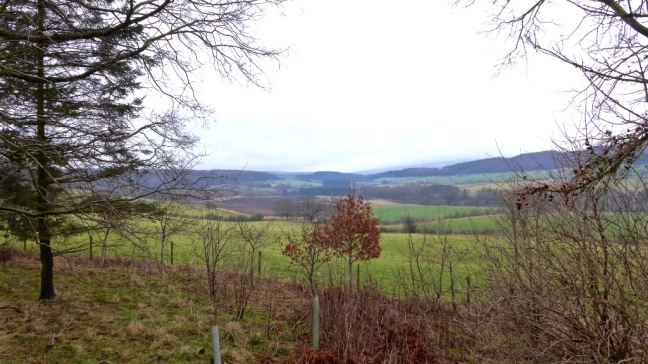 Then we came across a poster indicating the first lost aeroplane.

After a climb to Captain Cook’s Monument (to be described in the next blog) we stopped for our banana break and coffee in thick mist.

Descending towards Borough Green Farm we passed a gatepost dated 1668 (formerly a boundary stone), inscribed at the time when Charles II was King!

Then we came across the strangest mushroom I have ever seen. 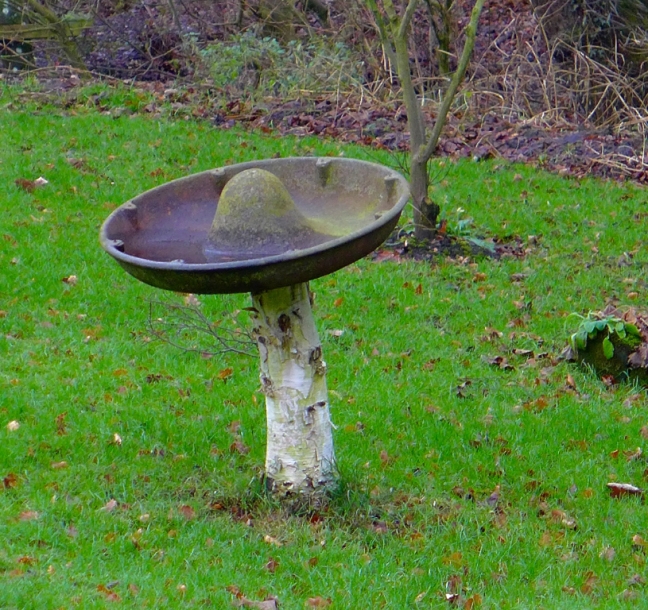 Followed by Easeby Hall and Church

A lovely cloud effect then appeared over the edge of the Moors.

And Captain Cook’s Monument appeared in the distance.

And Roseberry Topping continued to peep at us in the distance.

We were pleased to arrive at Battersby Junction Station for lunch with its water tower of 1907 still proudly standing.

After crossing a charming bridge, which looked like something from the land of Hobbits and which led into Battersby,

the serious hill climbing started and instead of advising Carol and Sid to walk like Penguins, as per on ice and mud in previous weeks, they were advised to climb like mountain goats.

The views from the top could have been better as the mist was starting to descend again and eventually turned to rain.

Back on the Cleveland Way we came across our second missing plane. How sad and what a terrible passing of young lives. We will remember them. 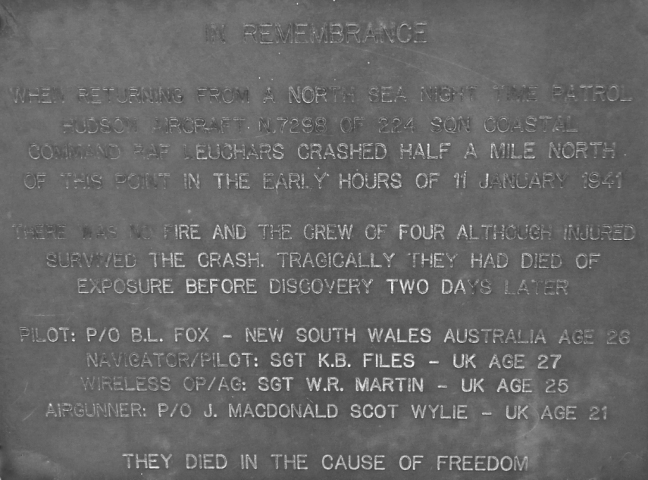