On this day the North York Moors were reached of which St. Aelred, the 12th-century abbot of Rievaulx Abbey, wrote: ‘Everywhere peace, everywhere serenity and a marvellous freedom from the tumult of the world.’

This is still the case as we hurtle towards the millennium and it is re-assuring that considerable efforts are being made to preserve the National Parks. The North York Moors National Park was formed in 1952, a good year as it is also the year I was born.

I was very excited at the propect of getting onto my ‘home’ heather moorland. 70% of the world’s heather moorland is here in the UK. A sheep can walk 25 miles without leaving the heather. Two-thirds of the National Park is not moors at all, but is forest, agricultural and dales. There are 1400 miles of rights of way to walk on. It is an incredibly expansive landscape.

Our Yorkshire landlady provided us with a huge cooked English breakfast, including black pudding. She then prepared an enormous packed lunch, but didn’t know what to charge. When we said other bed and breakfasts had charged £2.50 to £3.00 she wondered if this was too much. Yorkshire hospitality is difficult to beat.

We left the hostel at 9.30am in heavy rain (most of the photographs were taken later), which increased in intensity as the morning went on. Just beyond Grizzle Field House Farm, near Felixkirk I was delighted to find two brand new stiles, which had been erected following my request to the Footpaths Officer of the Local Authority. They were so clean it looked as though we were the first to put feet on them. I was over the moon to have persuaded the Local Authority to arrange for the erection of two stiles, without having to have call the heavy brigade in, the Rambler’s Association.

Arriving at the village of Felixkirk, we sheltered from the incessant rain in the porch of the Norman church of St Felix, as we drank a warming cup of coffee from our flasks.

After a steep ascent, the Cleveland Way was joined and followed, in reverse to its usual direction. Any Cleveland Way walkers met are on the first day of their walk, having started at Helmsley earlier in the day. Their walk, at 108 miles, is approximately half the distance of The North of England Way and takes a wide northerly sweep through the North York Moors, eventually finishing south of Scarborough at Filey. Each year, some three hundred and five thousand walkers use the Cleveland Way.

Continuing on our route, the magnificent viewpoints at Sutton Bank and near the White Horse of Kilburn are shortly reached. The late James Herriot in his book James Herriot’s Yorkshire said the view from Sutton Bank, ‘is the finest view in England.’

The pictures were taken at Sutton Bank in 2015 when Canadian, Tara Corcoran, completed my coast to coast solo. The weather was a bit kinder then. Gormire Lake is in the background. 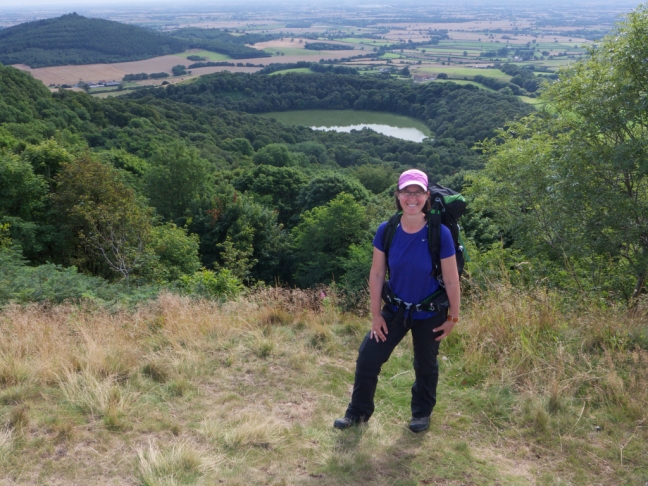 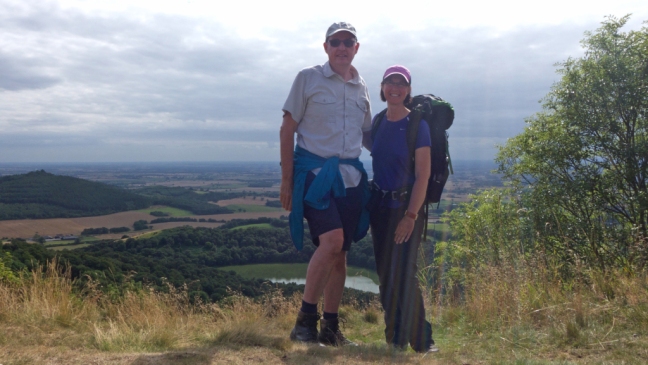 It might be the finest view in England in good weather, but with the rain was coming down in sheets and I couldn’t even see the end of my nose. We decided to head for the Sutton Bank Information Centre, which is well worth a visit since it provides information about the North York Moors, and, after the 700-ft ascent from Thirsk, has a café providing much needed refreshments. We succeeded in flooding it as water poured off our waterproofs onto the floor. Four years later, a new one replaced it, presumably because of wet rot. We spent all our time apologising to the waitress for the mess, but she didn’t seem to mind as we were the only customers; no one else was mad enough to be out in such appalling weather.

Leaving the information centre we continued along the escarpment past the gliding club to the White Horse. It was impossible to take photographs and these were taken at a later date in Winter: 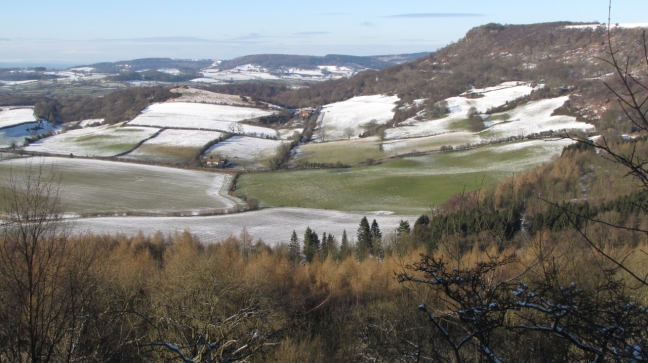 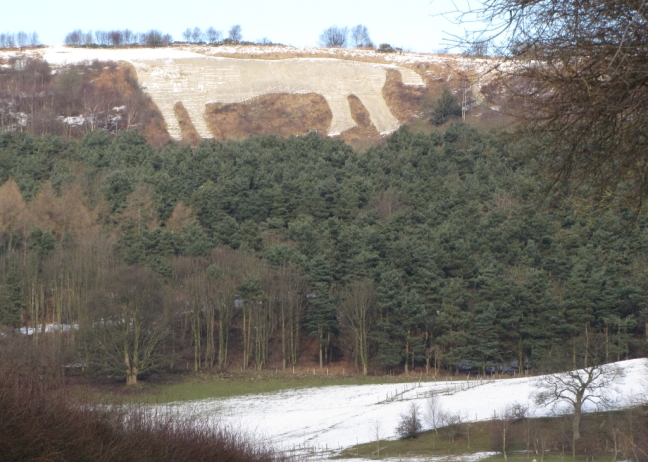 The horse was carved out of the hillside in 1857 by John Hodgson, the village schoolmaster, with some thirty helpers. It is 314ft x 228ft. The underlying rock of the White Horse of Uffington in the south of England is chalk, but here it is limestone and the horse requires regular maintenance to keep its white coat. On a clear day York Minster can be seen to the south. When I take my dog for a walk in the morning, I can often see the White Horse some forty miles away.

It was near here that the Battle of Byland was fought in 1322, when Edward II whilst resting after an abortive raid into Scotland was overtaken by the pursuing Scots. The English forces were defending the top of the escarpment but were eventually outflanked and had to retreat to York.

Shortly after leaving the escarpment, we followed the Cleveland Way through Cold Kirby to descend into delightful Nettle Dale. We then visited he magnificent ruins of Rievaulx Abbey.

The Cistercian Abbey was founded by Walter L’Espec in 1132. Its importance can be judged by the fact that thirty-five years after it was founded there were 140 monks, 249 lay brothers and 260 hired laymen, a large community. The Abbey nestles in a tree-covered valley whose narrowness accounts for the fact that the church is aligned from north to south instead of from the usual east to west. The monks created great wealth, from sheep farming (at one time they owned 14,000 sheep), iron working, fishing and salt production on the coast. Canals were used for floating blocks of stone on rafts from the River Rye to the Abbey for carving. Around the time of the Dissolution, however, the abbey declined and fell into debt and by 1536 only twenty-two monks remained. After 400 years of life, the site was eventually stripped for building stone and, in due course passed to the Duncombe family. It was acquired by the state in 1918, and is now superbly looked after by English Heritage.

Leaving the Abbey, we passed through Blackdale Howl Wood, slipping and sliding on the muddy ground. Some mountain bikers skidded to a halt alongside us, covered from head to toe in mud, but clearly enjoying themselves. We were not the only mad fools out that day. Indeed, when we eventually arrived at the town of Helmsley there were hoards of bicycles parked outside the youth hostel. Bank Holidays are guaranteed to get the cyclists out.

Helmsley lies under the southern edge of the North York Moors and is a typical small market town, with a large market place surrounded by old inns and interesting shops. Its ruined castle stands high on a mound overlooking the town. 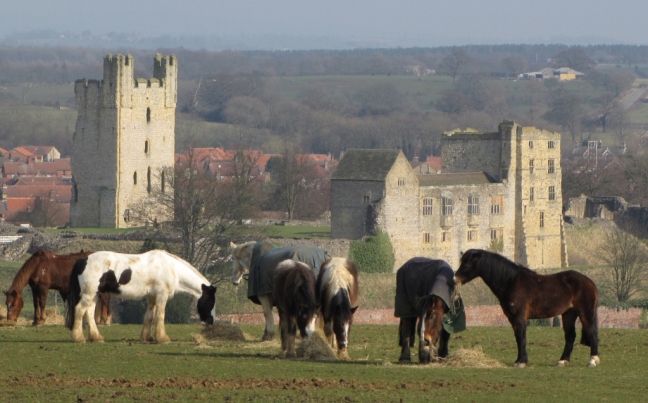 It was built in about 1200 and was later besieged by Parliamentary forces after the battle of Marston Moor and the fall of York during the Civil War. The castle was finally surrendered on 22 November 1644 after a three-month siege. Between 1646 and 1647 the castle was made unfit for war with parts of the keep and the walls being destroyed. It is now in the hands of English Heritage.

To emphasise why I prefer my holidays on the ‘trail’ in places such as Helmsley rather than a large town or city, a few statistics may prove useful. One can compare crime figures say in Helmsley, Colchester and Albuquerque, New Mexico. In 1997, Helmsley had three assaults, three indecent assaults, twenty-two burglaries of buildings which were not houses (a number of these were sheds and garages), one aggravated taking of a vehicle, two thefts from a dwelling, three stolen pedal cycles, seventeen thefts from parked cars, six recorded shoplifting incidents, six stolen cars, four cases of fraud, one case of handling stolen goods, and ten cases of criminal damage. The average crime per year in Colchester is one murder, eight stolen cars a week, more than one thousand two hundred thefts from vehicles, four hundred and thirty one bicycle thefts, thirteen rapes, five hundred and seventy assaults, one thousand six hundred and eighty-seven criminal damage offences and eight hundred and ninety nine shoplifting offences. In 1996, crime in Albuquerque was seventy-two murders, seven thousand one hundred and twenty stolen cars, one thousand five hundred and twenty reported rapes, three thousand one hundred and twenty eight assaults, twenty-three thousand six hundred and sixty eight thefts and robberies, one hundred and sixteen arson cases, three hundred and fifty eight kidnappings and one thousand seven hundred and thirty-two complaints of intimidation. It has been said that Helmsley is one of those towns that makes you feel you don’t want to be anywhere else in the world.

During our evening meal at the hostel, a group of youngsters on an outdoor course kindly waited on us, probably noticing that these two ‘old’ men were feeling a little tired after a full day’s walking in heavy rain. They then played us at chess, before the ‘old fogeys’ headed for the pubs of Helmsley for the daily dose of ‘medicinal’ Guinness. Returning from the pub we found that we were in a dormitory with a group of seventy-year old cyclists. The older people get the more they seem to snore and this group succeeded in performing a symphony of snoring. It is at times like this that you wish you were back home. One group of walkers once told me that you should click your fingers loudly to stop people snoring; it seems to work with all but seventy-year old cyclists, who were unlikely to wake up unless there was a nuclear explosion.