In 1971 during a vacation from the University of Swansea I and a university friend decided to walk part of the Pembrokeshire Coast path starting at St David’s and finishing towards Fishguard. In reality we only managed as far as Pwll Deri Youth Hostel at just over 28 miles. It didn’t qualify as long-distance walk of over thirty three and a third miles.

All I remember about the walk was singing and drinking beer outside the Youth Hostel with some Germans as the sun set. I was after all only 19 and in what Wordsworth described as ‘The Hour of Thoughtless Youth’.

Now by a strange coincidence I was invited by two other University friends some 45 years later in 2016 to join them at the same hostel where they were acting a  Volunteer Managers for a week. This was an opportunity to continue the coast path.

20 September 2016: Having broken the journey from York in the Midlands in order to make arrangements for my mother to leave hospital, I left a day late for Pwll Deri Youth hostel, 6 miles from Fishguard at 5.45 am. It rained for a couple of hours, which did not bode well. However, at 11.25am I reached the sea. 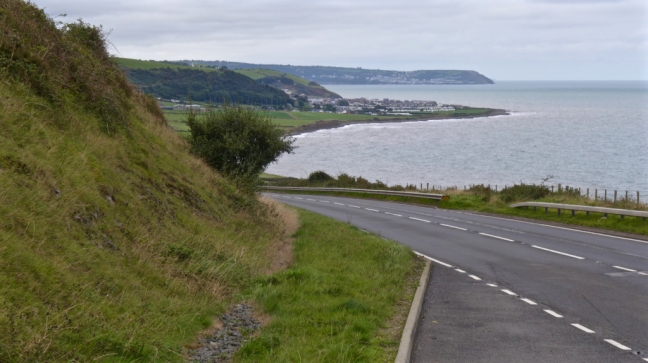 Continuing along the coastal road with Snow Patrol, Katherine Jenkins (well I was in Wales) and Lindisfarne (to give it the 1970s ‘going back’ feel) blasting out on  the CD player and disturbing the peaceful countryside, I suddenly saw two chaps carrying huge crosses along the road. Driving a further mile I pondered whether I had been driving too long and was having hallucinations? After a further mile of pondering, I decided I would have to go back and check them out.

Sure enough I soon passed them and pulled into a lay-by to await their arrival. I couldn’t believe my eyes. They were carrying heavy, huge wooden crosses along the busy road. 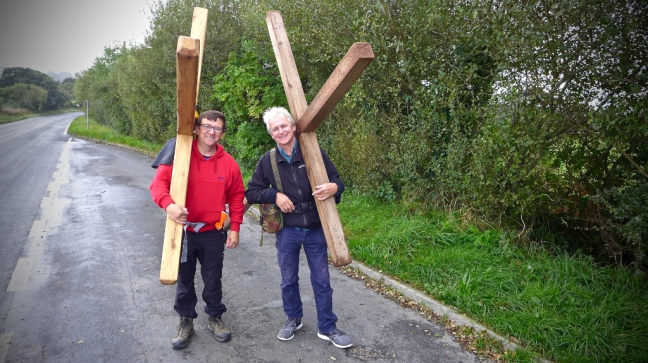 This was to signal the start of a very interesting and enjoyable few days stay in Pembrokeshire……………now what on were these chaps Lindsay Hamon and Emyr Mattias doing? They had started walking with these crosses at St David’s, where I had done some 45 years earlier. Unlike me they eventually planned to walk as far as York. Now I had taken two days to drive down never ending winding roads from York. I hate walking on tarmac, especially if they are busy roads as this was. They had expected about 20 people to see them off at the City of St David’s  with its Cathedral, whereas about 250 people turned up. I thought I was doing the slowest long-distance walk ever having started some 46 years earlier, but perhaps they were doing the slowest long distance walk ever? After a chat about their task and long-distance walking in general I offered them food and a donation but they settled for a banana each and so I left them to tackle the next hill up the road. I did promise to see them in York if they let me know their arrival date. They did say how pleased they were that I had stopped to chat to them as I seemed to understand the massive size of the task and challenge they were undertaking. I will shortly be emailing them to find out their progress. There is little doubt that their faith and commitment is incredibly strong.