They will of course be summoned to a hearing of the Ethic’s Committee which rules on these matters. If their reasons are not compelling the punishment could be that they are set adrift on a boat to the Isles of Silly Persons or even worse to a country over the channel that is in the EU. Given that Sid the Yorkshireman feels uncomfortable going to the t’other side of York that should sort him out.

I thought for one minute about whether I should walk solo and looked at the weather forecast and decided an early start was needed as there should be a good dawn to chase. I therefore left home just before 6.30am which also meant avoiding the worst of the traffic. After ignoring the sat nav that wanted to send me to ‘jammed’ Harrogate, I  passed instead through Knaresborough and soon after the dawn came up. Not the ideal location but it was worth getting up for early.

Leaving Pateley Bridge on the B6265 there were few cars, but some lovely views.

However, approaching Grassington the views turned to thick fog, which lasted until I arrived at Conistone. Very strange as I didn’t remember fog being forecast.  There was more of a hard frost in the Conistone area than fog. I started walking at just after 8.30am with clear blue skies. Conistone is a good example of an Anglian settlement that goes back to the 8th century with ploughing terraces on the hillside. The first thing that strikes you is how quiet it is. 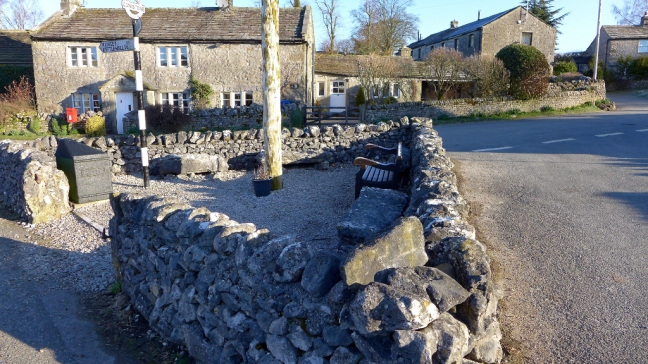 Following the road and then a field path, Kilnsey Crag came into view. 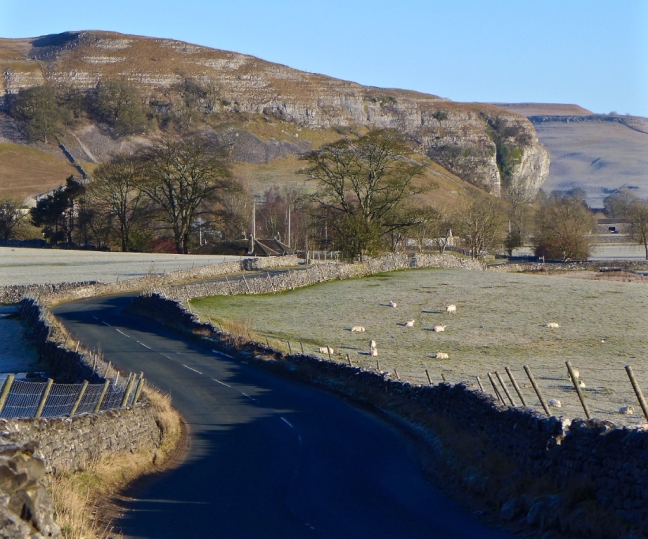 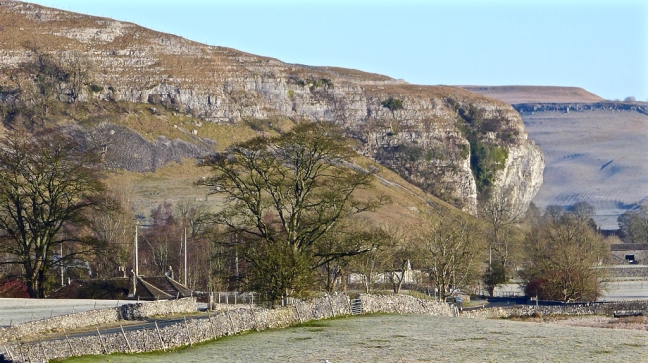 The River Wharfe was passed.

I crossed the frosty fields towards the Crag and The Tennant Arms pub. 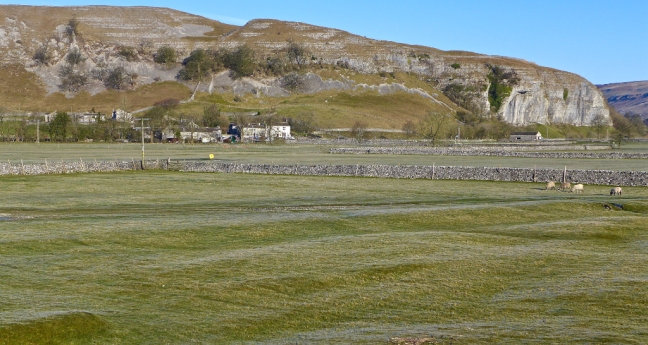 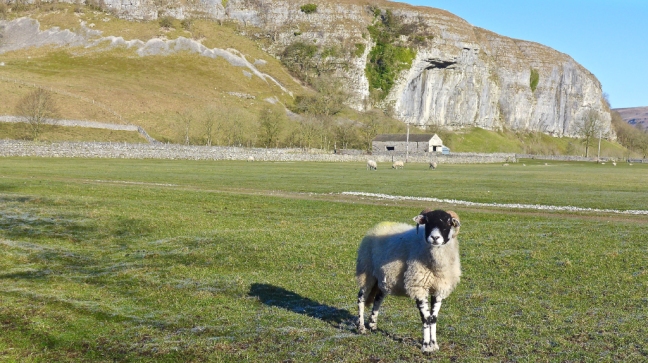 Kilnsey Crag was formed when water from Vauclusian Springs had worn subterranean ramifications, to finally emerge from the limestone near its base. Here the series of springs burst out where the basement of Silurian slates is not far below. Glacial meltwater would have supplied the springs. Close up to the limestone crag is an impressive site and it is a favourite haunt of rock climbers. It is 170-feet high with an overhang of 40-feet.

Leaving the crag along the B6160 there were white sheep, black sheep and brown sheep in the adjoining fields.

A couple of accommodation units for groups were passed. 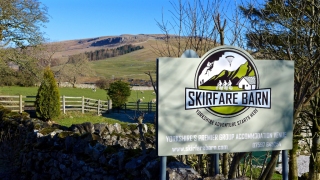 Leaving the B6160 I was now entering Littondale, a glacial U-shaped valley with flat valley pastures and steep wooded sides and drained by the River Skirfare. Three deer were enjoying the peace in the fields just off the lane to Arncliffe. 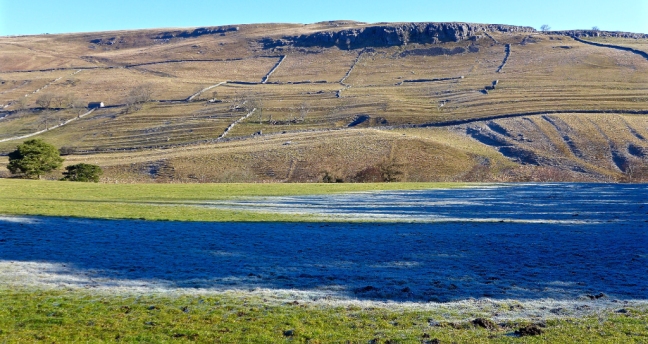 Whilst mist was still lurking behind me back towards Grassington.

I arrived at Hawkswick Bridge and the route crosses the bridge to the hamlet of Hawkswick, only to cross back shortly afterwards.  Hawkswick was named after the birds of prey that once flew in the area. 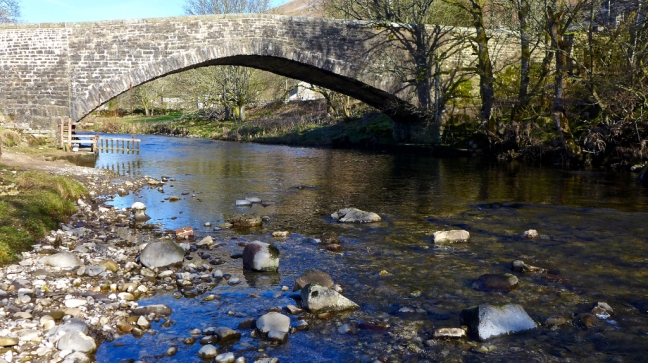 There were lapwings ‘dancing’ in pairs. I could also hear curlew. The countryside was coming alive after our long and cold winter. Later I saw a dipper and heard skylarks and a woodpecker.

There were some vibrant colours in the walls. 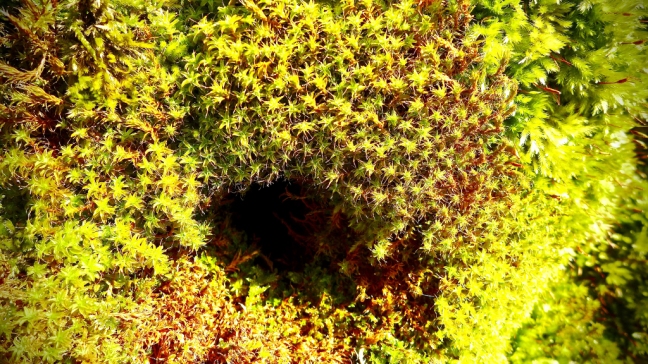 A farmer then pulled up with his buggy and trailer and took new born lambs out of the trailer. Marvellous to see as the lambs had found a new exciting world to explore. 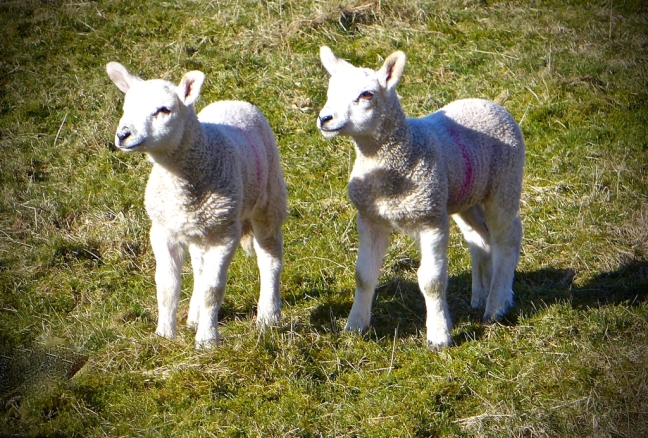 However, they were staying near to ‘mom’ even if it meant going airborne.

‘Mom’ was keeping a close eye on them.

Soon after a large meander in the river, which one day long after I have gone to ‘heaven’, will form an ox-bow lake, I came across a fisherman from Leicester who was looking for brown trout. He had once cycled from Land’s End to John O’Groats and now had a desire to walk it. Impressive. Little did I realise at this point I would go to ‘heaven’ much earlier than I thought. 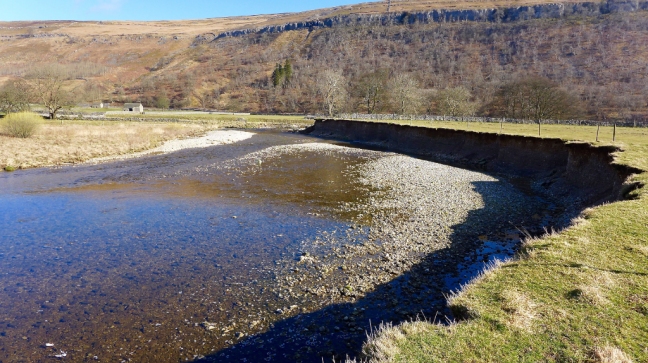 Suddenly and rather strangely the mist came ‘enveloping’ up the valley. It went much cooler and I felt very disappointed fearing this could be in for the day. 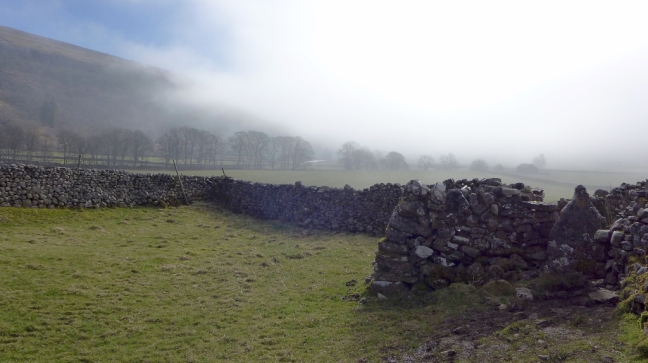 Arriving at the Anglian settlement of Arncliffe, meaning ‘eagle cliff’, there was still some colour to be found.

The present church, dedicated to St Oswald, dates mainly from 1796 and 1841. The church tower dates back to the late 15th century and there is a memorial to the local men who died at the Battle of Floden in 1513, when the Scots and English were still fighting each other. The bell is from 1350 and one of the oldest in the country and is believed to have come from Fountains Abbey.

Trouble makers in the area were  put in stocks.

It was coffee and banana break time but surprisingly, despite its spacious Anglian village green, there are no benches. I think this gives the wrong message for the village. The only benches are for the use of patrons of the Falcon pub. I had no choice but to perch on an ancient drinking monument. 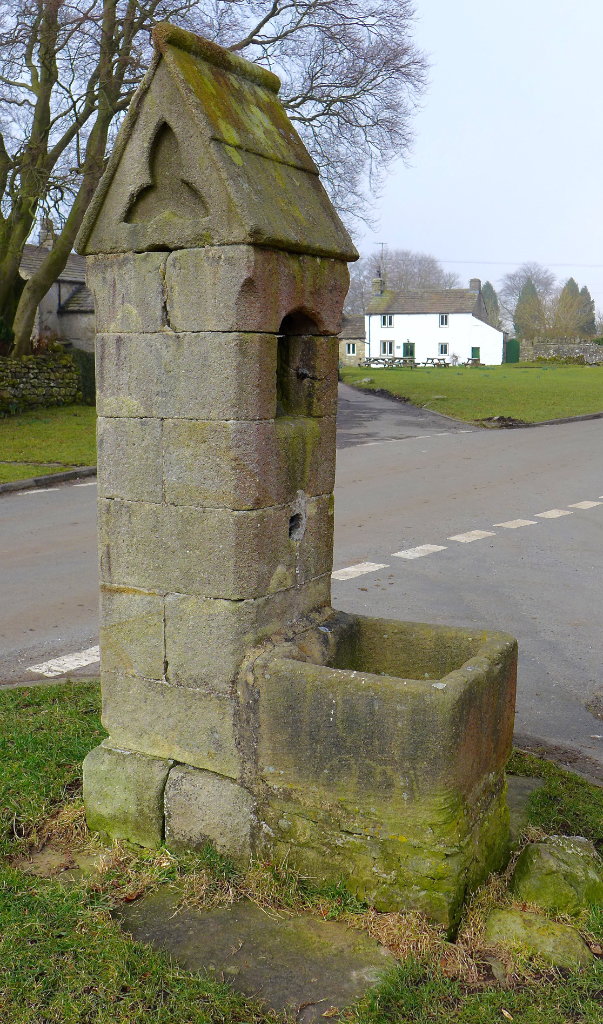 The traditional Dales pub, The Falcon, has a good reputation and was recommended by the fisherman as a place to stay.

It was now time to leave The Inn Way and find a route back to my car. This was to be a circuitous route over Middlesmoor Pasture to Kettlewell and then back along the Dales Way. I was still disappointed with the mist as I climbed the steep path through Park Scar Wood, whilst trying to avoid trees falling on my ‘crop of hair’.

At the top of the pasture and with perfect timing the mist started to move further along the valley and at the same time disperse. I sat and watched it, quite mesmerised. I had gone to ‘heaven’ as I hadn’t seen the like of it in over 30 years of walking in the Dales. See separate video on Facebook. Here are the later stages of the mist rising, along with the emerging views below of Littondale and Arncliffe and with the sun now radiating a comforting warmth. 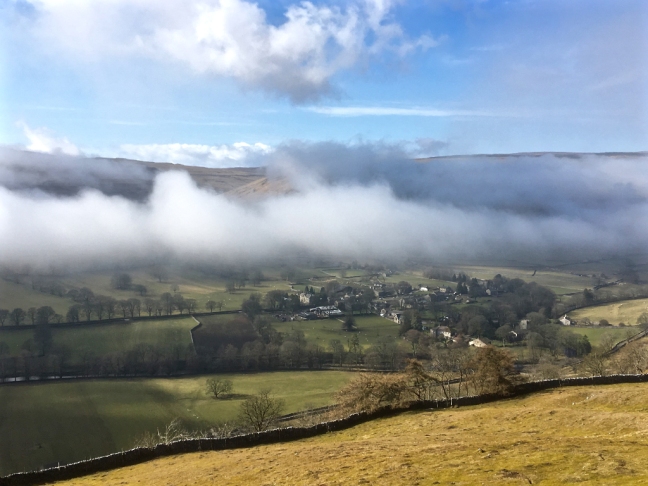 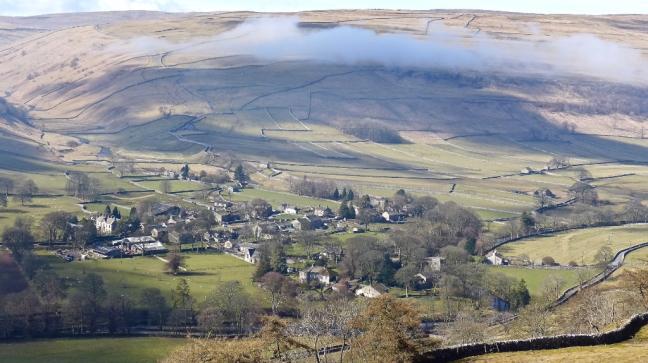 A couple passed me in the opposite direction and I watched as for some strange reason they veered right and missed the gate to descend to the wood I had just come up. They walked and pondered as to where to go for a long time and in the end seemed to find an alternative but incorrect way down.

Just as I got up to carry on walking another couple of walkers from Harrogate and Sheffield University stopped for a chat. They were only the third and fourth walkers I had seen all day!

The views were still stunning as I reached the ‘heather line’. 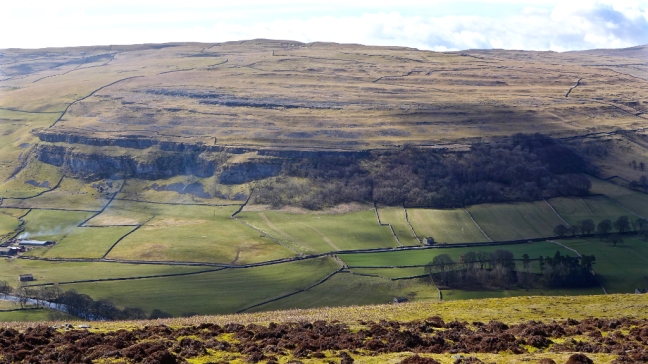 Littondale disappeared from view and I then started to descend into Wharfedale towards Kettlewell.

I didn’t get far as there were yet more stunning views and I decided to stop for lunch. What better place could there be to have lunch? Who needs to go to expensive restaurants when there are views like this.

Great Whernside loomed like a huge table top, still clinging to its disappearing snow line. Kettlewell nestled sheltered at the bottom of it.

Buckden Pike could be viewed to the left.

The villages of Starbottom and Buckden were in view nestled below Buckden Pike, all in warming sunshine. It was time to apply some more suncream.

If I was going to finish the walk I had to get going again, but could have quite happily have sun-bathed for an hour or two. There were breathtaking views as I descended to Kettlewell and an intended Dales icecream – my first of the year. I had earned it. 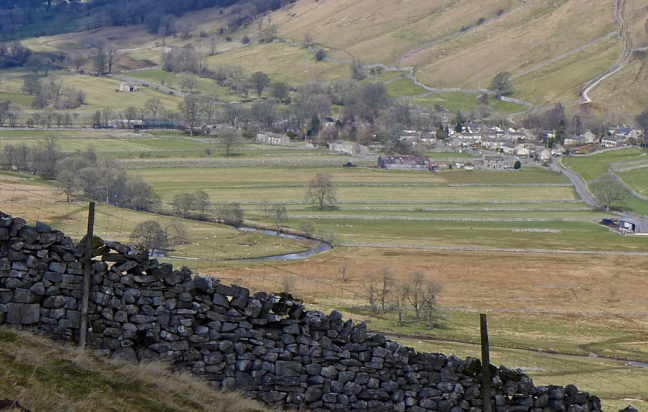 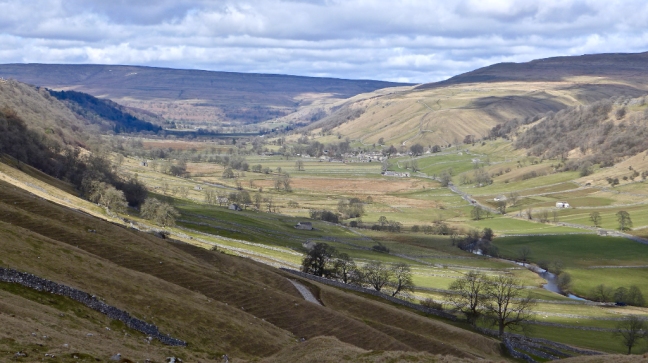 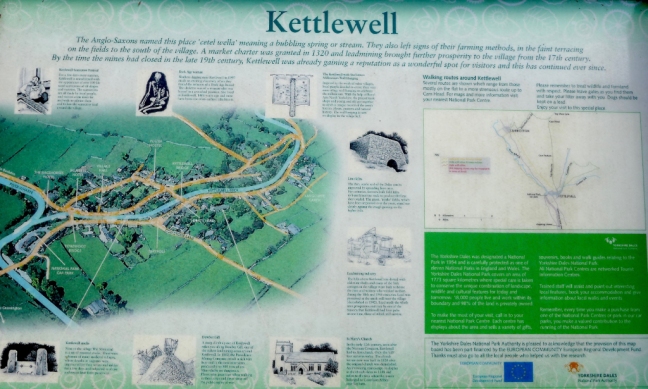 I found a couple of pubs but, despite trying two cafes (one was closed and the other sold the wrong sort of ice-cream) and a shop there was nowhere to buy a Dales ice-cream. The ice-cream parlour had the supply tied up but I was too early in season or had arrived on the wrong day.

Turner had been in this area.

There was also the youth hostel (now also a Post Office) which I had stayed in on my 1990 Dales Way walk – my first long-distance walk. Hard to forecast then that I would now be on my 55th!

I left Kettlewell with a sad heart having been denied an ice-cream, but was pleased to be back on the Dales Way 28 years later than when first on it.

It soon brought back the need to go through and over many stiles on the Dales Way, some which have springs on the gates that can make you airborne if you are not careful. 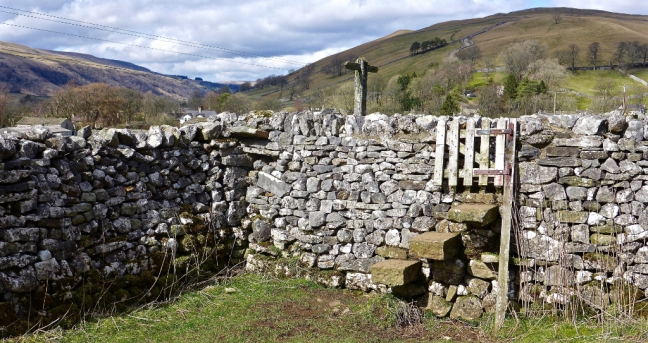 I soon passed Scargill House in its wonderful peaceful setting. 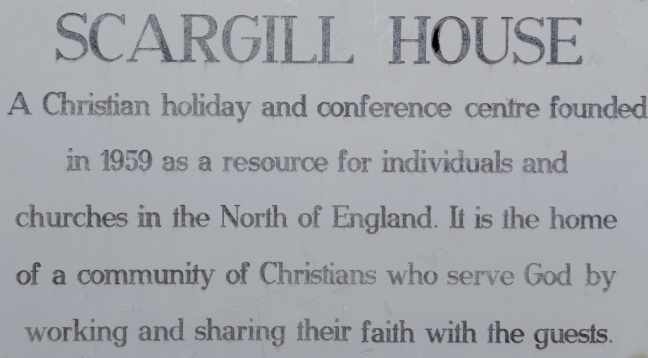 I then passed a lady walking the Dales Way solo. Only the fifth walker I had seen all day!

Kilnsey Crag came into view on the other side of the valley and Conistone Pie on my side of the valley. I climbed to the top of the Pie but found out that I am not good at taking photographs of myself and gave up. I am not of the ‘selfie’ generation.

As I descended to Conistone, still in warm sunshine, it seemed only fitting that Kilnsey Crag would come into view again.

A visit to the 8th century St Mary’s Church finished the day perfectly. It is the oldest church in the Southern Dales. It has a poor box and Norman font. In the graveyard is a sad memorial to a group of six young men who were killed by rising floodwater whilst they were exploring nearby Mossdale Caverns on 24th June 1967, in what was England’s worst caving accident. 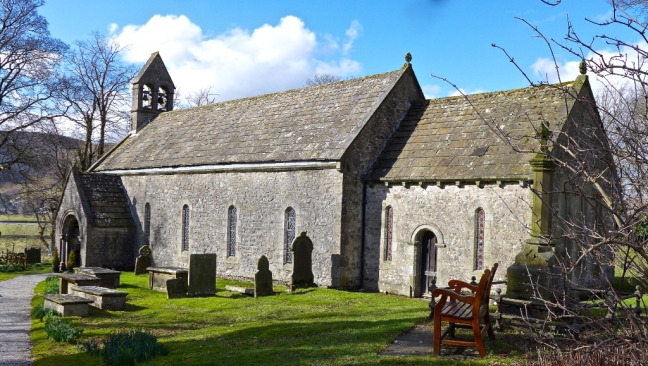 There are some beautiful Dales craft works – such detail! 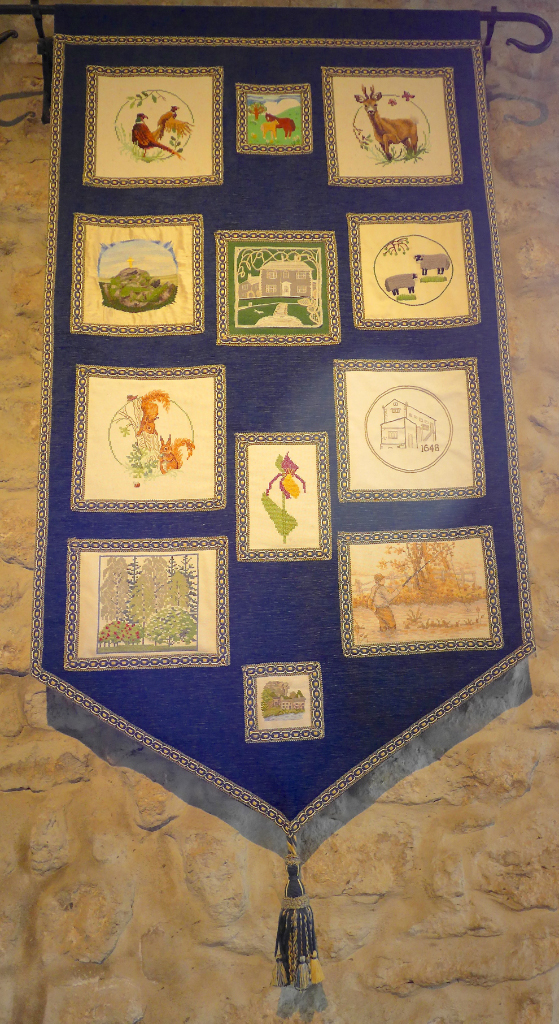 On the way home I called in for an ice-cream at Birchfield Farm ice cream parlour just after Pateley Bridge – but that was closed too!!  Some things in life are not meant to be.

But I did see some more delightful Yorkshire views.

One of my best walks EVER. Simply Magic.

Calories Burnt 4,500 – plenty of allowance for ice-cream then!

PS – A bird hit my Volvo and now I get a message saying that the Pedestrian Airbag needs a service! They need to fit bird airbags.