The day of the Imperial Cancer Research Fund/RAF Leeming ‘Three Peaks’ challenge walk arrived and we were put into groups of 6 or 7.

This is our group and unlike the others, not being a member of Her Majesty’s Armed Forces, I am the one with spindly legs! Too much sitting at a desk in my job as a University Administrator.

After covering ourselves in factor 30, our team of six ‘white’ apparitions (we were white at the start of the walk) left Horton-in-Ribblesdale just after 8.00am, in bright sunshine, to head for the summit of Pen-y-ghent. I soon started to get worried when I found out my team included a member of the parachute regiment, a former Harrier jump-jet pilot and a member of the RAF mountain rescue team.

Had they put me in the wrong group? I must have filled the pre-walk form in wrong by admitting I had done coast to coast three times – a big mistake! I didn’t have time to find out if it was the wrong group as we were soon on the summit of Pen-y-ghent.

A quick drink and snack and I headed off to the peat bogs where a female member of another team was soon to find herself up to her waist in peat and water (up-date the route has now been changed to avoid these) .

A longer break of five minutes at the Ribblehead Viaduct,

enabled me to have a sandwich and drinks before heading on all fours (‘the direct route’) to the summit of Whernside (pictures taken later as no time on the walk!). 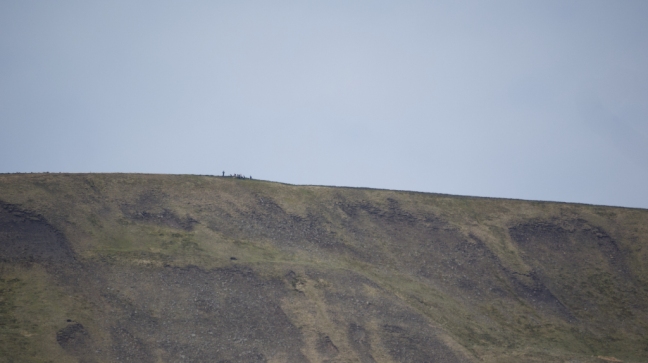 A glut of caterpillars on the ground made the ascent more interesting. One member of the group started to develop cramp, but that’s no excuse for not finishing.However, all the group reached the summit. There were fine views towards one of my favourite valleys Dentdale,

and ahead to Ingleborough, our next destination.

After a rapid descent of Whernside, we had an eight minute break. I was also starting to develop cramp and to get some salt into my aching body I ate a packet of crisps so quick you would have thought my life depended on it. It probably did.

As we ascended the final peak of Ingleborough, the sun scorched our tired bodies and morale did not improve when a distressed walker was carried down on a stretcher in the opposite direction, whilst receiving oxygen. However, by counting ten steps at a time then resting, the steep section was conquered and our leader encouraged us at the top by saying we were nearly there. If you believe that you will believe anything. We still had 7 miles to go.

Our leader then said he thought we could finish in less than 8 hours, which would be a remarkable time. So, after a quick gulp of water, it was fast walking and trotting down from Ingleborough summit, every step hurting as I had developed a lovely blister on the bottom of my heel.

On reaching a sign saying it was 1½ miles to Horton-in-Ribblesdale, I remembered that it is more like 3 miles. As I entered the village,

I had 8 minutes to reach the Pen-y-ghent café, the end of the walk. I tried to jog but cramp set in and so it was fast walking to the end. I finished with four minutes spare to join the ‘sub 8 hours club’. Ours was the only team to finish in less than 8 hours, the remaining teams finishing in 9 to 11 hours, still well within the 12-hour challenge time.

One person who had just been included in the Queen’s Birthday Honours list in recognition of his achievements, especially in raising money for cancer research, was the leader of the mountain rescue team from RAF Leeming, which supported the walk, Sergeant Al Sylvester. As we headed for the evening pub celebrations, he was required to wear a paper plate around his neck with ‘MBE’ inscribed on it. If he had dared to take it off he would have had to buy a round for 35!

I would like to make a special thanks to Gary for his support in the ‘training’ programme leading up to the walk. Although he didn’t quite do enough to be included in the Queen’s Birthday Honours List, he has nevertheless been awarded an honorary HMMMM. For those that haven’t heard of this unique and rarely given qualification it stands for ‘How many more miles Maughan?’

Thanks also go to the staff, including Frances and Helen, from the Imperial Cancer Research Fund who made us feel so welcome, gave encouragement when needed and fed and watered us so well. Also to the RAF mountain rescue team who supplied the tents, selected the route and offered support and advice on the walk. Fortunately, only one walker had to receive medical attention and was unable to complete the walk.

For two days after the walk I spent most of my time doing stretching exercises and having baths to stop my body seizing up. I also repaired blisters and sore feet. However, it was all worth it as I raised over £950 for cancer research towards a total contribution on the day of £10,500 from over 30 walkers. I also had the satisfaction of pushing myself beyond what I thought I could do, sub 8 hours.

What better way can you spend a weekend?

£450,000 is being spent on path restoration on the 3-Peaks, much of it caused by erosion caused by its popularity for charity walks. However, I wonder if anyone has quantified the reduced NHS bill and reduced work absenteeism as a result of improved fitness through walking? However, a voluntary code whereby the numbers are limited would not be unreasonable. I have heard of over 130 being on some walks.