This last day gave us few memories as the terrain was relatively flat and much of the time involved long stretches of tarmac walking. Only the impressive Brougham Castle provided a highlight for the day. This was one of the castles restored by Lady Anne Clifford in the 17th century, being one of the most interesting castle ruins in the north of England. Lady Anne was certainly an influential person in these parts and there is even a long-distance walk, The Lady Anne Clifford Way named after her.

Arriving at Appleby in Westmorland, the end of the walk, we celebrated in a very mute style as we had a train to catch, this being my fifth long-distance walk successfully completed. Age shall not weary them……..but my eyes look as though they are about to close. 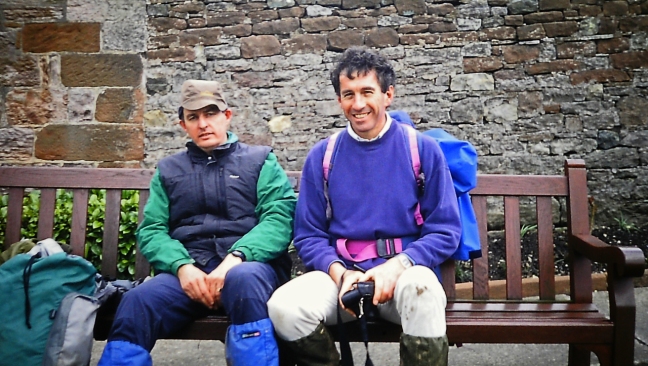 Having completed writing, On Foot From Coast to Coast – The North of England Way (not to be published until 1997), I had thoroughly enjoyed planning and checking the route, drawing the maps, walking the complete 200 miles, and photographing wonderful views along the way, but I now needed a new challenge.

Wainwright’s writings in his descriptive book (not a guide book), A Pennine Journey, describing a walk he did in 1938, inspired me to devise and write a detailed guide to a comparable walk from Settle to Hadrian’s Wall. I was very keen to see and record any changes from 1938 to 1994. One main difference was that the Second World War was not about to start!

I began the walk on 1 May 1994 at the age of 42, and it was with a sense of ‘boyhood’ excitement that I arrived at York station to catch the 8.07am train to Settle, on the famous Settle – Carlisle railway line. There was not a finer day to start with bright clear sunshine, a ‘spring freshness’ in the air and an excellent forecast for the day. It felt good to be alive and good to be starting a new journey with the prospect of unknown adventures ahead, beautiful countryside to explore and the historical attractions of Hadrian’s Wall to look forward to. I was not to be disappointed and, indeed, nearly three years later, I was able to walk the one hundred and twenty-nine mile route in its entirety, experiencing a tremendous ‘high’ on reaching and walking along Hadrian’s Wall (see later).

I was due a rest from organising walks and fortunately Alan decided to plan a route and arrange all the accommodation. The walk started at Staveley, to the west of Kendal, in the quiet countryside of the Kentmere Valley, then entered the dramatic scenery of the Lakeland fells, which are traversed in a horseshoe shape, first heading north over High Street and Helvellyn as far as Keswick, then southwards through Borrowdale, Wasdale and Eskdale. On the final day it passed through the softer fells to the south of Coniston, then reached Foxfield, the end of the walk. 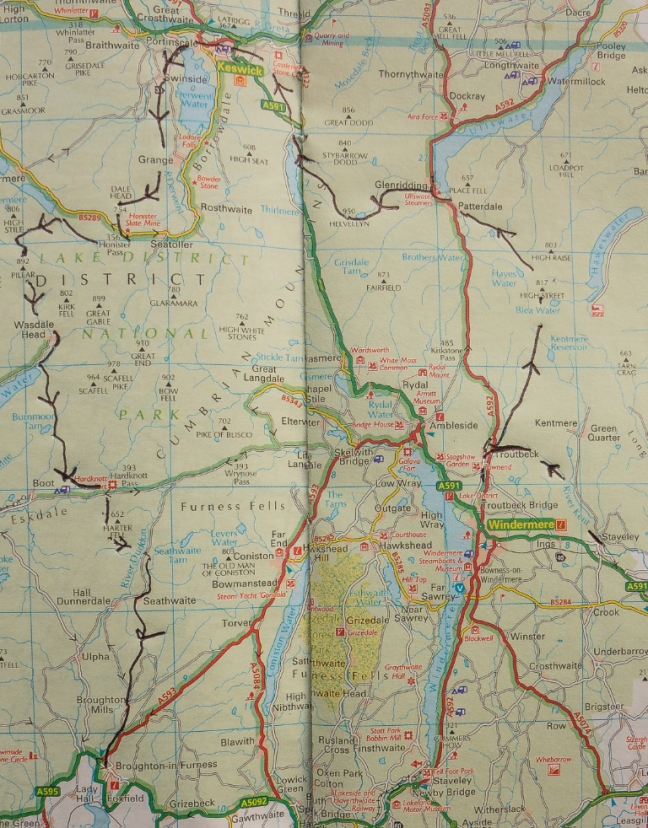 Alan is not called Everest Trekker for nothing and I knew, weather permitting, he would try to do as many high-level routes as possible. This is not difficult for the young, the very fit, or those who don’t sit at a desk all day; but for a desk-bound forty-three-year-old, carrying a 30lb pack, it was quite a challenge. I therefore decided to do some ‘special’ training and just after Christmas, when I was fully bloated with Christmas turkey, pudding, mince pies, trifle, cream, sherry, whisky, port, etc, etc…., whilst taking the dog for his early morning walk, I started putting my son’s weights into a small rucksack. At least it was dark and I would not be seen by too many people. I got the idea from watching Brian Blessed on television when he was training for his various attempts on Everest, running with a large rucksack containing his dog. My biggest worry was that I might be arrested by the police as a suspicious character. Gradually, over the three month period up until April, I increased the weights by five pound intervals, until I reached thirty pounds. This training was to make a dramatic effect when I climbed Pillar as a ‘New Man’. I have since used this training technique on several occasions.

I left York at 9.48am. At Leeds, a large group of ladies entered my carriage, completely surrounding me. I desperately tried to recall what sort of deodorant I had put on that morning. Perhaps the television adverts were true and it was to be my lucky day?

Reality is always different from the adverts; a mother was taking three daughters, one of whom was shortly to be married, and friends to Blackpool for a hen party. Their plans involved karaoke, lots of alcohol and for some members of the group, men. The mother was a keen camper, walker and countryside lover and, while her daughters and friends read women’s magazines about how to ‘catch your man’, live a life of sexual bliss, and have illicit affairs, we had an enjoyable conversation about our common interest in the countryside.

The train arrived at Preston at 11.56am and, having been given a unique insight into the ‘excitement’ prior to a hen party, I was tempted to continue to Blackpool. However, being a dedicated walker, I bade farewell to the females and left the train for a connection to Oxenholme, where I had lunch sitting in the sun, until Dan, Alan and Archie arrived. Comparing three middle-aged male walkers to a flock of hens I did wonder whether I had made the right decision?

A further train took us to Staveley to arrive at 2.00pm.