Gary joined us for this last day and cooked a superb breakfast for us. We only had 18 miles of walking left, at which point my ambition to walk my own coast to coast route would have been fulfilled. I was very excited.

However, all obstacles were not yet overcome; you never know what you might come across or whom you might meet. One of the strangest things I have ever heard of is a book called The Nudist Way by David Martin. The book is for people who like walking in the buff, the nudd, the altogether and followers of this style of walking could cause difficulties for coast to coasters. Would we be able to finish the 200-mile walk if we came across such distractions? I hasten to add I do not have a copy of the book, but according to a review in a walking magazine the book contains pictures of nude people, so this is not a book for the easily shocked. I can’t for the life of me imagine walking in the nude: how do you cope with barbed wire, ferocious dogs, thorn bushes, sunburn, wind-chill, adders, splints from stiles, just to name a few potential hazards? It sounds positively painful to me. I think I will leave the Full Monty for others. It takes all sorts!

Donning our clothing, we left Lockton Youth Hostel to descend to the secluded Levisham Beck, before following the valley north to reach the magnificent Hole of Horcum. (Photographs taken later) 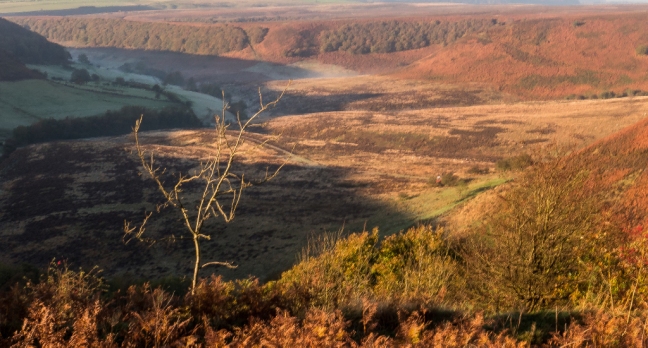 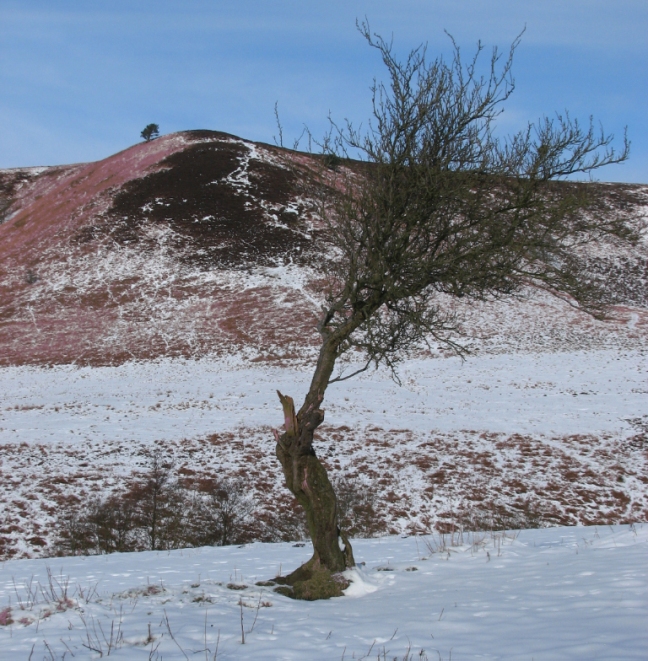 The Hole is very dramatic and atmospheric and changes substantially in appearance and colour according to the time of day as well as the time of year. In winter, snow can accentuate the vastness of the hollow, whilst in autumn, mist can make it grey and eerie. 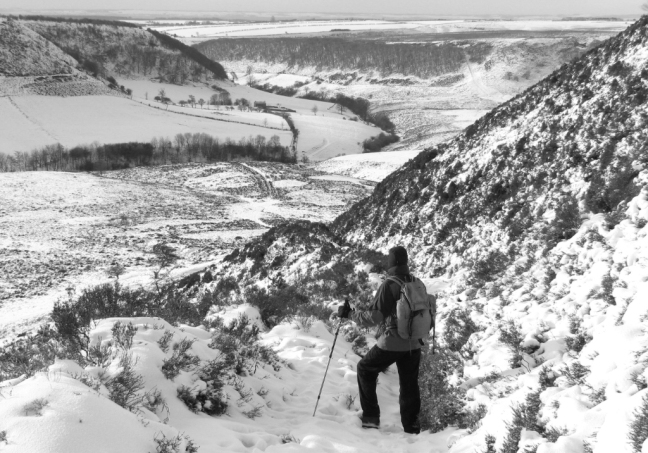 It is best viewed from near the car park at the top of the Hole, a place that can get quite busy with stopping motorists.

Having walked 186 miles our appreciation of this wonderful scene was much greater than theirs! From here, the moor fell away 400 feet into the huge hollow we had just walked through. According to legend, the hollow was created by ‘a giant’, who scooped a handful of moor and threw it at his wife: he missed and the handful of moor formed Blakey Topping. However, the real reason for the formation of the hollow is that springs between the lower calcareous grit and the Oxford clay eroded away the hillside. The softer Oxford clay eroded more quickly and undermined the layers of rock, which collapsed and enlarged the hollow to its present size. All the soil and clay from the valley has been washed down by the small stream.

We then followed the curiously named Old Wife’s Way until the National Trust Bridestones Nature Reserve and the unusually shaped Bridestone rock formations were reached. 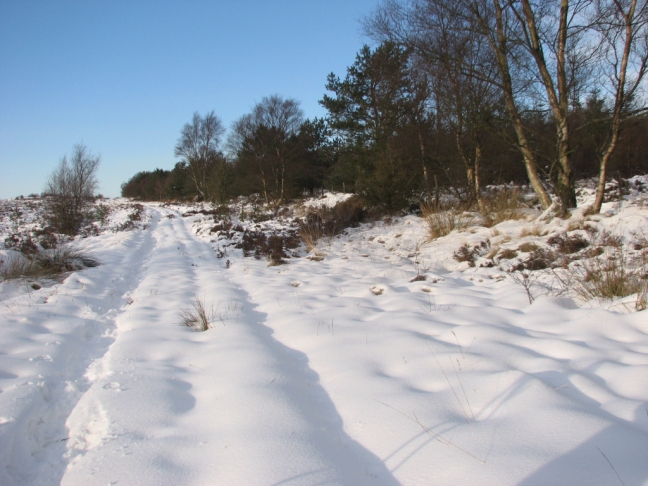 These free-standing rocks of alternating layers of hard and softer Jurassic sandstone have been eroded and weathered by frost, wind and rain resulting in fantastic shapes, some of which seem to defy gravity. I once had lunch under one of these rocks with Penelope, convinced the rock would collapse on us anytime, squashing the Genoa cake she had kindly bought for me. The Bridestones Nature Reserve extends over about 300 acres, containing many types of animals and plants typical of the North York Moors, but also some uncommon and rare species.

Crosscliff Wood viewpoint was passed, then, on leaving the forest, there was pleasant walking through fields with good views of Troutsdale. A walk along the ‘forest drive’ led to Langdale End. Until 1927 the mail in this area was delivered by Arthur Raine, who covered 24 miles every day except on Sunday. In forty-four years he walked over 250,000 miles and only failed to deliver the mail once when a bridge was washed away in a storm. While on his rounds he killed over five hundred adders, a notch being added to his walking stick for each dead snake. 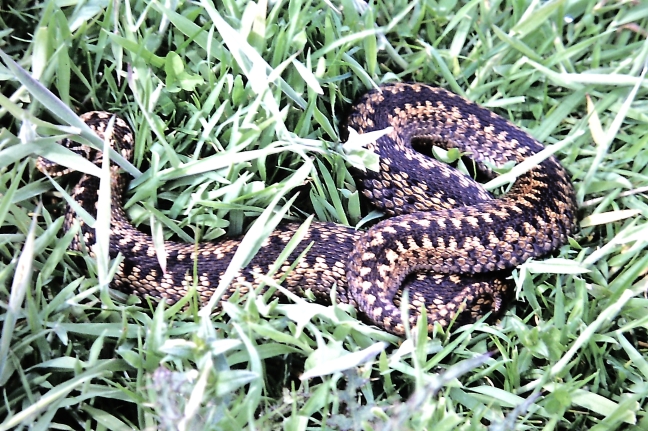 Watch out for adders on the North York Moors. Arthur Raine didn’t kill them all. Should you be bitten by one try and keep calm. Clean the wound and cover it with a dressing. Get to hospital as soon as possible. If possible, the best immediate treatment is to immobilise the bitten limb and apply a bandage firmly and evenly up the whole limb. Alternatively, apply a tourniquet to the limb immediately above the wound, but make sure you can still feel a pulse below the tourniquet (ie in the wrist or foot). Do not release the compression until hospital is reached.

After a steep ascent to a viewpoint near Broxa, then a walk along Broxa Rigg, we reached Hackness village, with its attractive church, lake and hall, all situated in a delightful valley setting. Soon after, Scarborough Castle came into view, the North York Moors National Park being left with regret and, after passing through Scalby, the coast was reached.

As we made the descent to Scarborough North Bay, I noticed how busy Scarborough was with all the Bank Holiday visitors and tourists. I also noticed Gary was still wearing his black balaclava, making him look like a member of the SAS. After much taunting, he eventually took it off to expose his head to the cold easterly winds. If the winds were cold, the North Sea was freezing, so that when I took my boots off to dip my feet in the sea I was struck down with cramp. 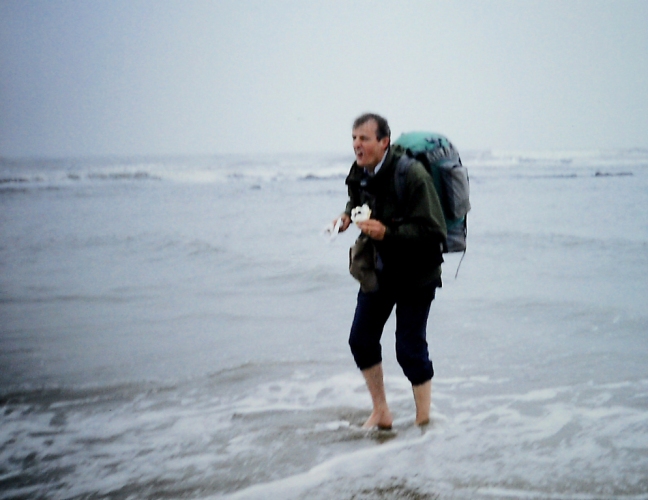 Even the taste of the famous Scarborough waffle did little to dispel that this place looks towards Siberia, hence can be one of the coldest places on earth on odd days. Although the town offers plenty of ‘fleshpots’ for those that wish to celebrate in that way, for me a Scarborough waffle and a paddle in the North Sea were sufficient! 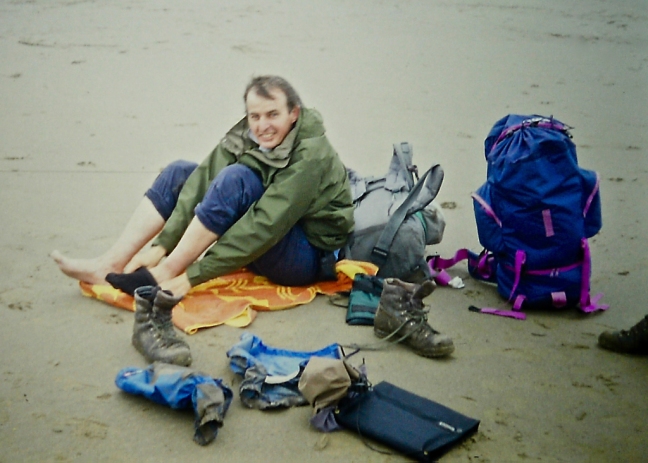 Over a number of years I have tried to understand what makes long-distance walking so enjoyable and memorable. After completing Wainwright’s Coast to Coast and this coast to coast I felt I was twenty-one again despite being twice that age! I was now a ‘New Man’. I think long-distance walking, or even weekend walking, is a very different activity from a day on the hills; it requires additional planning and effort but, as a result, the rewards are so much greater – none more than the affinity you gain of the landscape, and after 200-miles of walking I could truly say I knew some of the finest parts of England, The Lake District, The Yorkshire Dales, the North York Moors and the bits in-between.

In the Conclusion of my book, On Foot from Coast to Coast: The North of England Way, at the end of the North York Moors section, I included the following Wordsworth poem which seemed to reflect my feelings about the walk better than I could ever do:

I heard a thousand blended notes,

Whilst in a grove I sat reclined,

In that sweet mood when pleasant thoughts

Bring sad thoughts to the mind

To her fair works did Nature link

The human soul that through me ran;

And much it grieved my heart to think

What man has made of man.

Through primrose tufts, in that green bower

The periwinkle trailed its wreaths;

And ‘tis my faith that every flower

Enjoys the air it breathes.

The birds around me hopped and played

Their thoughts I cannot measure

But the least motion which they made,

It seemed a thrill of pleasure.

The budding twigs spread out their fan,

To catch The breezy air;

And I must think, do all I can,

That there is pleasure there.

If this belief from heaven be sent,

If such be Nature’s holy plan,

Have I not reason to lament

What man has made of man?

‘Wordsworth must be rolling in his grave as he had connections with the Lake District, not the North York Moors,’ my Editor said.

I wrote back, ‘Well he must still be rolling in his grave as you may well be surprised to learn that William Wordsworth has a little-known connection with the Scarborough area: in 1802 he married Mary Hutchinson who was born in Brompton, a village on the Pickering road just outside Scarborough. They were married in Brompton church and there is now a Wordsworth gallery nearby. Who better therefore than Wordsworth to have the last say?’

If it is possible for a book to have a soul then, for me, the Paradise poem and Wordsworth poem were it.