Around the beginning of the Millennium 2000, after I had completed 10 long-distance walks after 10 years of walking, I suddenly had the mad idea to set myself a target of 50 long distance walks by the time I was 85.

Having completed 1 long distance walk a year, it seemed a reasonable target. However, at that time, I was employed full time and had not anticipated the free time I would have later in life as the children departed to University and retirement came along.

So here I was today to embark on my 50th long-distance walk, 20 years ahead of schedule! This walk should take between 6 and 9 months to do.

It is an admirable book and all profits go to Christian Aid and so I would urge you to buy a copy. His web-site is at:

I thoroughly enjoyed walking the Cleveland Way in 1991 and the Cleveland Circles seem to offer a fitting finale to reach my big 50 target.

Some folks often say I seem to be walking round in circles in my life!

The Cleveland Way and Circles officially start in Helmsley Market Square at the Old Cross. Steve and myself at the Cross. 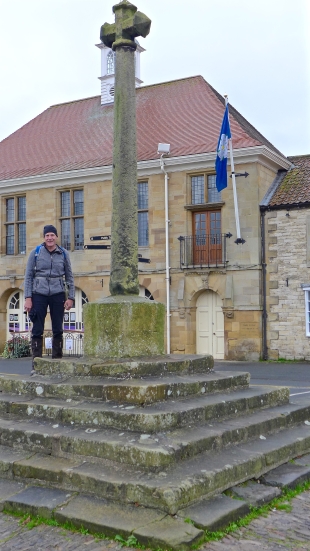 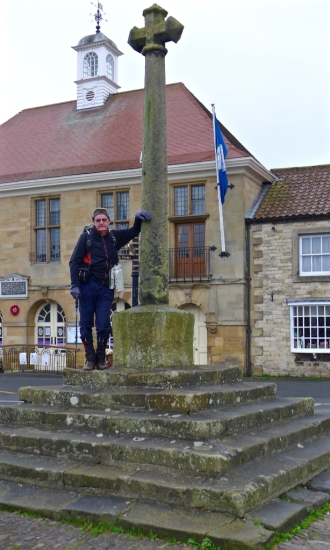 Here is Steve and myself at the first sign, a stone with an acorn sculpture on it, of the Cleveland Way with 319 miles of circles to look forward to……….. 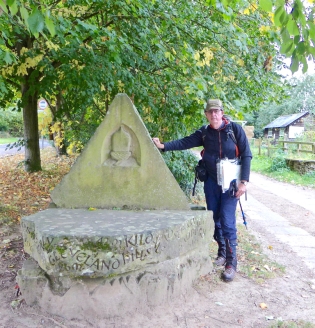 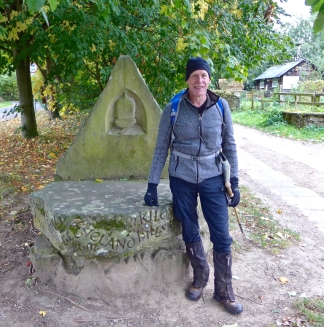 Life does come full circle as I remember a special Canadian lady, Penny,  who was also photographed at the sign of the the Cleveland Way some years back and sadly passed at a much too young an age. I have never met anyone else who had such a love of life and the Great Outdoors. She was an inspiration to whoever she met. Her last days were spent in Australia and it was she who insisted, from Australia, that I join Facebook so we could share photographs of the Great Outdoors. Without her I doubt my blog would now being read in nearly 100 countries. She was a true international person who travelled widely and lived life each day to the full. It is something I now try to do. 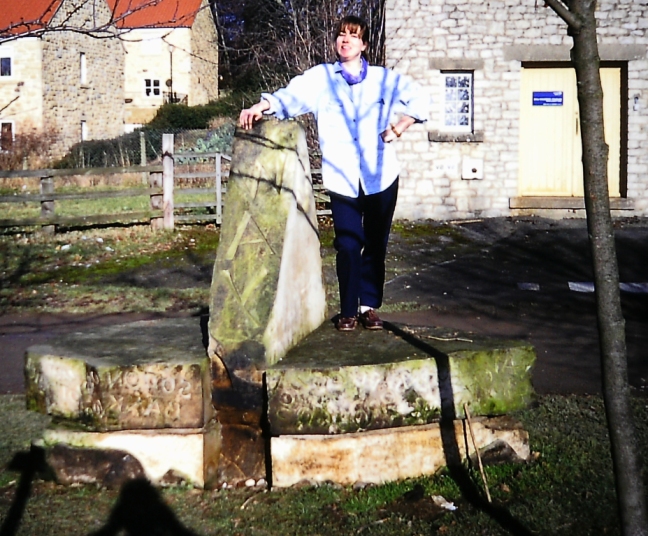 Her Australian husband Gordon and daughter Georgia came to the same spot after her passing. 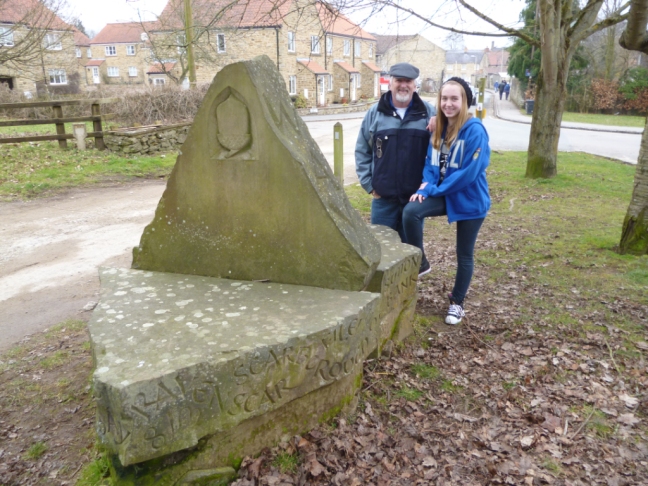 Leaving Hemsley we looked back to its castle. 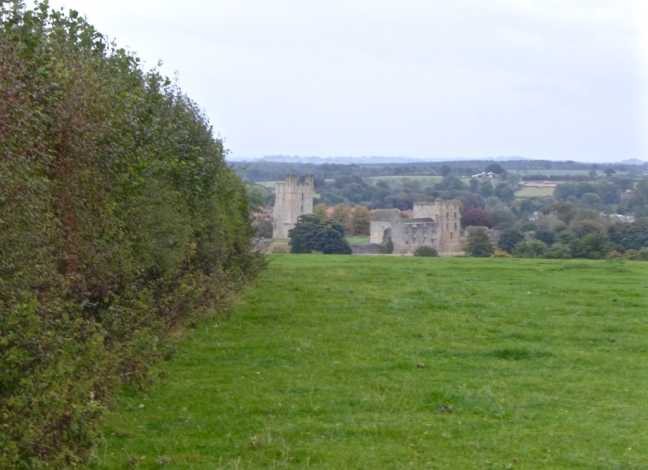 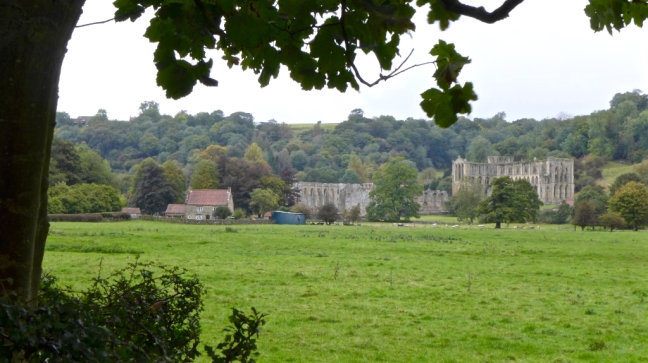 We stopped at a very special place for Penny, myself and her family by the River Rye. 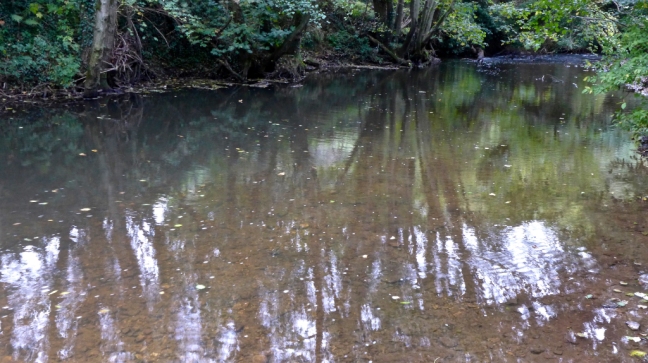 Penny was so blessed….

She will never be forgotten. 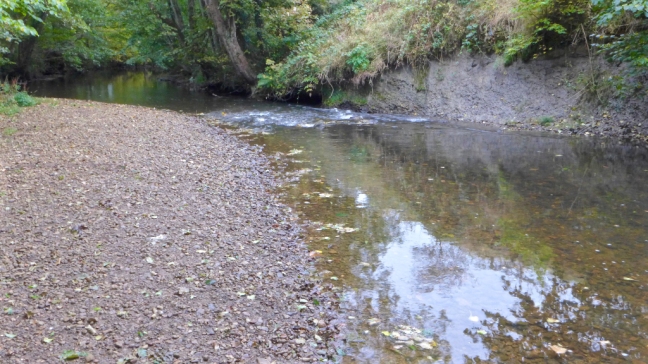 Rievaulx Abbey, which is on my North of England route and described in my book On Foot from Coast to Coast: The North of England Way (life coming full circle again), was founded by Walter l’Espec in 1132. Its importance is judged by the fact that thirty-five years after it was founded there were 140 monks, 249 lay brothers and 260 hired laymen, a large community. 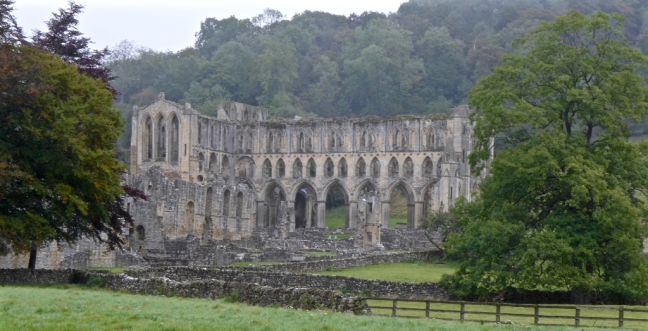 The Abbey nestles in a tree-covered valley whose narrowness accounts for the fact that the church is aligned from north to south instead of from the usual east to west. 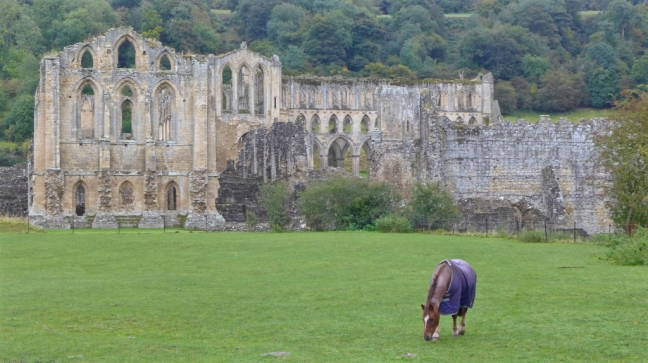 The monks created great wealth from sheep farming (at one time they owned 14,000 sheep), iron working, fishing and salt production on the coast. Canals were used for floating blocks of stone on rafts from the River Rye to the Abbey for carving. Around the time of the Dissolution, however, the abbey declined and fell into debt and by 1536 only twenty-two monks remained. After 400 years of life, the site was eventually stripped for building stone and, in due course, passed to the Duncombe family. It was acquired by the state in 1918, and is now superbly looked after by English Heritage.

Afte a ‘banana break’ near the Abbey we walked into the village and were confronted by a practice that has gone on for years; a person who shoes horses. This has little changed from the time of the monks, other than it is now a mobile farrier with a van. 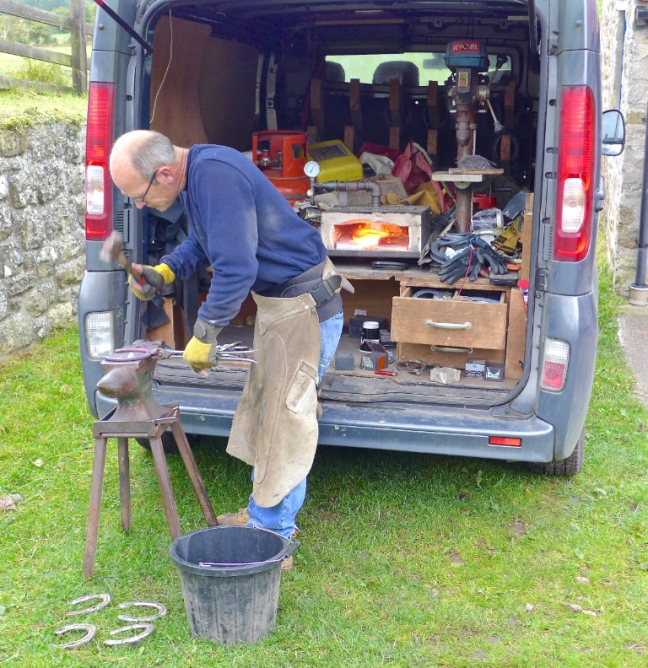 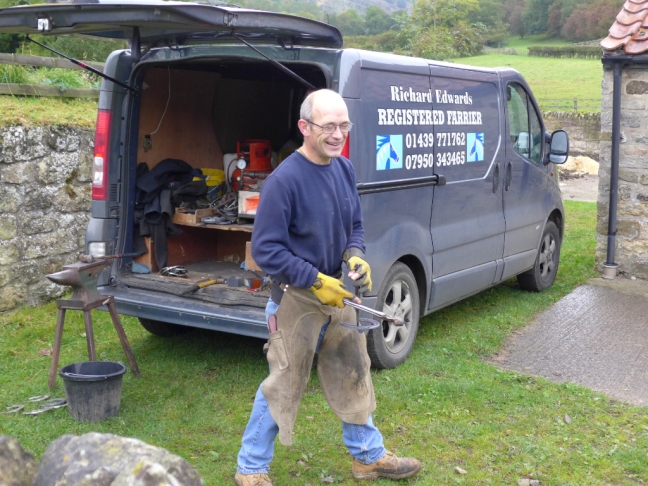 There were two magnificent horses to be shoed. 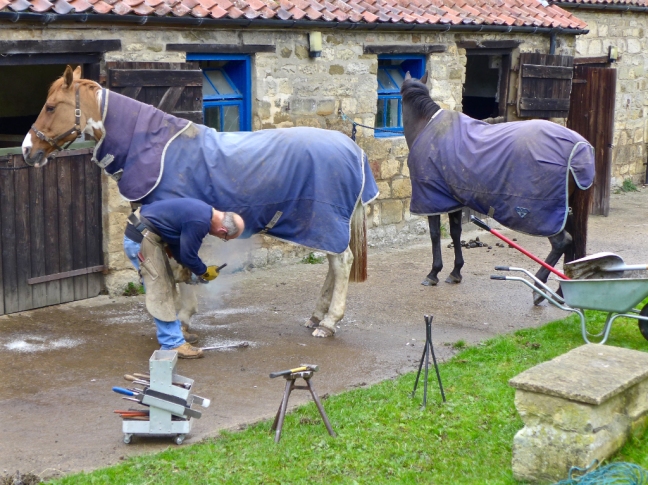 There was plenty of steam and the farrier described it as a smelly job. 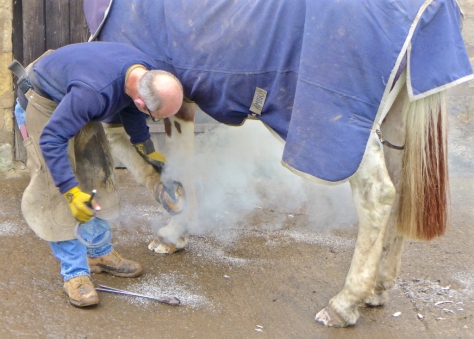 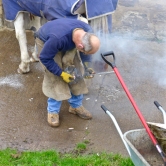 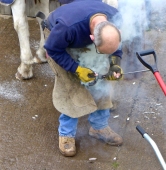 A roof in the village was little changed too, being traditional thatched. 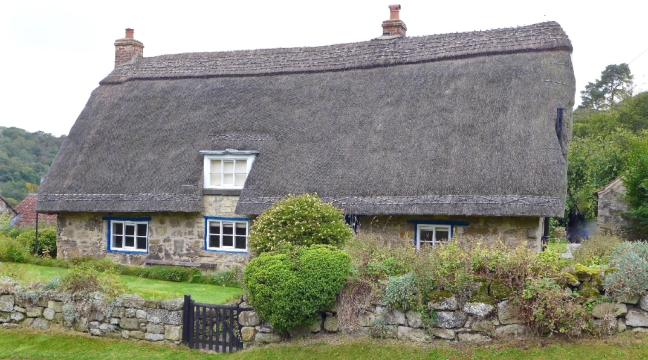 The church added to the feeling that this place and valley is timeless. 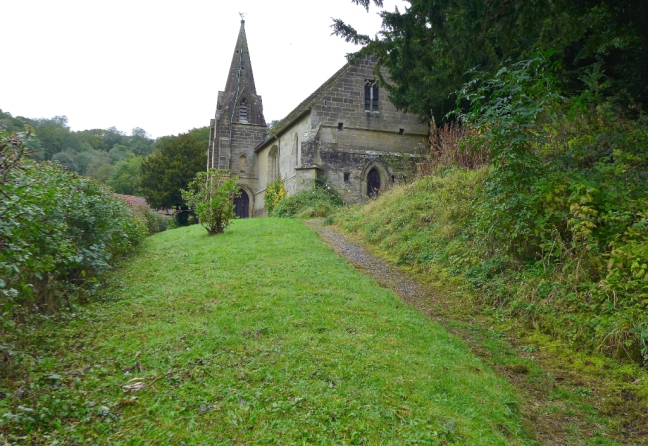 We began ascending a track with great retrospective views of the valley and identified it as a spot to return in a couple of weeks for the autumn colours. This was a new route for me. 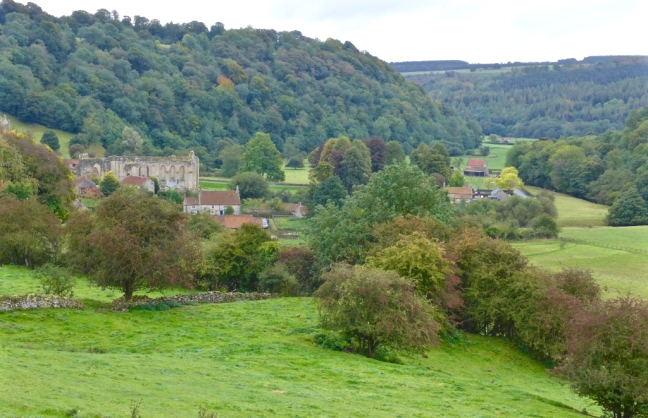 After a short road section, we arrived at Oscar Park Farm. Spot the black pig! 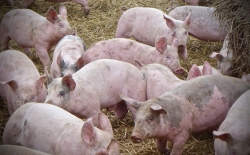 Before heading east towards Collier Hag Wood. To put it mildly the path was difficult to follow at first but later the trees were marked with paint spots to aid navigation. 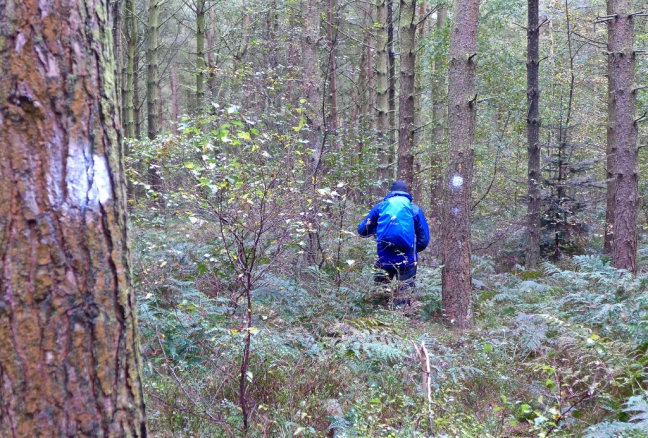 Then heather and trees made the path fairly indistinct. It is amazing that such public rights of way exist and can still be followed. 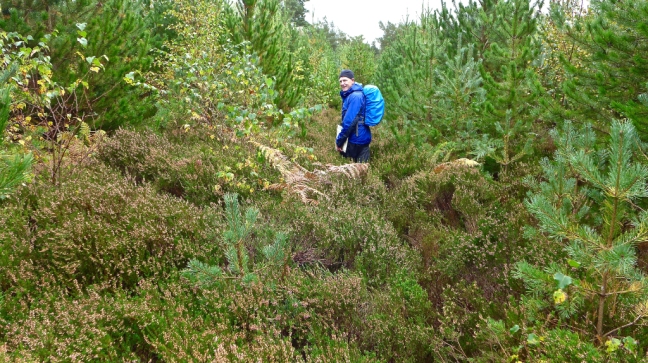 We descended into dark woodland. 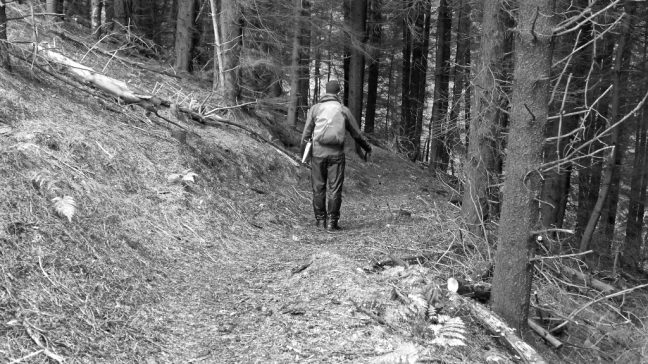 To reach a desolate enclosed valley. 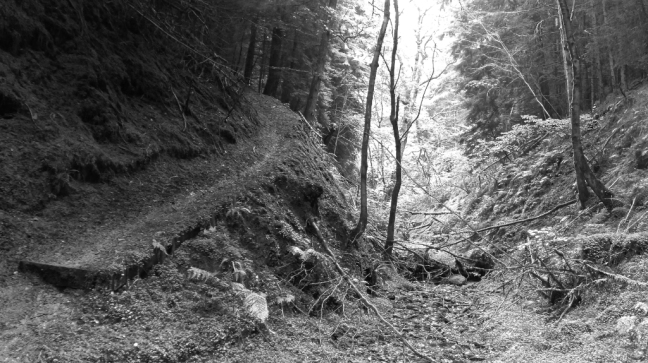 After a steep ascent out of the valley and encountering a shooting party, we followed a track along Beck Dale for a few miles to arrive back at Helmsley. A very varied and enjoyable walk with some special memories.