After Wainwright’s Coast to Coast walk, I was keen to experience some more of the wonderful Lakeland scenery and the Cumbria Way seemed to fit the bill perfectly, starting as it does at Ulverston in Southern Lakeland and heading north through central mountainous Lakeland to finish at Carlisle. At some 70 miles, the walk could be done in five days, therefore not impinging too much on my busy work and home life. The walk is, for the most part, through lowland valleys and therefore would be less susceptible to bad weather. If the weather was good there would be opportunities to walk some high-level routes. 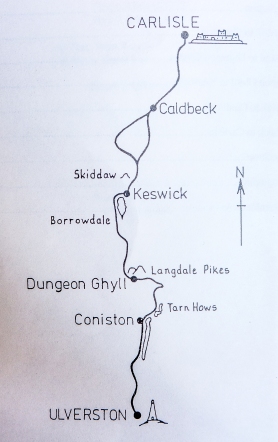 The National Parks and Access to the Countryside Act of 1949 provided for the designation and subsequent completion of long-distance routes along which ‘the public should be enabled to make extensive journeys on foot or on horseback.’ In 1998, the Royal Opera House received the same annual subsidy as all the national parks of England and Wales put together. The opera house serves fewer than five hundred thousand people and received sixteen million pounds, as did the national parks, which were visited by seventy-five million people.

Individuals or other organisations other than the national parks have created long distance walks. The Cumbria Way was an ‘unofficial’ route created by the efforts of members of the Ramblers Association using existing rights of way.

To say members of the Ramblers Association were somewhat obsessed with rights of way is an understatement. Their magazine ‘Rambling Today’ had numerous details of cases against farmers, landowners and local authorities as well as enough legal information to satisfy the most ardent barrister or solicitor. Every other sentence was dominated by the word ‘access’, to the extent that you couldn’t help wonder if some of the members ever got time to go out just to enjoy a walk.(Update – this is no longer the case and their magazine is much more informative on general walking matters – maybe they have now achieved many of their access aims).  However, what was the biggest single participation event in the Ramblers calendar? Well, according to their magazine it was the raffle. In 1996 members bought, or sold, 126,850 tickets, contributing £53,354 to the Step Alive Fund. Now if that is not evidence that the Ramblers Association was really a front for Gamblers Anonymous then I don’t know what is! (I am only joking – please don’t get the solicitor’s onto me!) One of their best legacies is the Cumbria Way.

On a more serious note, they have lobbied very effectively in maintaining many rights of way which otherwise would have disappeared and the proposed legislation on freedom to roam in the late 1990s is very much due to the good work of the Ramblers Association. They have done a lot for Access including the creation of National Parks, creation of long-distance walks including the Pennine Way, open access, free walking in Scotland, the opening up of the England coast path, ensuring the future of woodland walking. So they are a charity well worth supporting. They also provide a wide variety of walking holidays.

They are also great for people who are more sociable than me and who like walking in bigger groups!

I left York with Alf and Gary on the 1.37pm train. My pack weighed twenty-eight pounds as per Coast to Coast, although my own weight was twelve and a half stones, half a stone heavier than the previous year. One of the enduring features of middle-age is that one’s weight tends to steadily go up rather than down. The best advice is to increase the amount of exercise, but with family and work commitments this sometimes is just not possible. We changed trains at Leeds and Preston, where Gary nearly missed the train as he was learning some lines for his forthcoming appearance as Joseph in the York Mystery plays.

The start of the walk, Ulverston, is somewhat unusual as it is the home of the Laurel and Hardy museum, due to Stan being born in the town. The appearance of Gary and myself is not dissimilar to these famous comics, me being the taller thinner one and Gary being the shorter rounded one.

The evening was spent playing darts in one of the local pubs; Ulverston is hardly a Mecca for entertainment.

The start of the Cumbria way is a bit disappointing, an uninspiring sign at the top of an open area called The Gill, north of the market place. I would have thought that Bardsea near to Ulverston Sands would have given a more definitive start, with views across Morecambe Bay. I was glad to be getting away from the trappings of civilisation for a few days, although Gary and Alf couldn’t resist reading newspapers before we left the bed and breakfast accommodation. After devouring a hearty breakfast, we left Ulverston at 9.00am. With no pubs or cafés on todays walk we stocked up with plenty of food and drink. The weather was warm and clammy so that I began to wonder why I had brought my cold weather gear; the reason became evident later on during the walk.