Post 22: Apologies to the 1,000 or so Wainwright members who are eagerly awaiting the Wainwright Coast to Coast blogs (wishful thinking), but a weekend away in Alnwick with the blackdogwhitewall York based photography group has led me to discovering ‘Dawn Walks’. So C to C blogs are postponed for a week. AW likes walkers to devise their own walks and so would I am sure approve of me ‘discovering’ a new type of walking. As far as I am aware he never mentioned Dawn Walks and therefore I have decided to patent this new form of walking. No doubt hundreds of Wainwright Society members will now write to me and say they have been doing dawn walks since the dawn of time.

I did google the Dawn Walks and I was referred to bird watchers who are frequent dawn chorus walkers, but that is not the same as my Dawn Walks. There is the odd Dawn Walk mentioned in specific locations e.g. The Torridon. However, it is not mentioned as generic form of walking.

To enter the world of photographers is to talk about big-stoppers, F-stops, depth of field, graduated filters, angle of view, large-format, cleaning equipment, exposure, memory cards, polarising, flash, ISO, JPEG, RAW, perspective, meters, cropping, posterization, self-timers, Tiffs, vibration reduction, white balance. They are experts in double entendre as most of the above terms have potentially a rude meaning. However, it also means entering the world of gin and tonics, late nights and early mornings.

Photographers, like fishermen and cyclists, have an obsession with getting out of their bed before dawn to pursue their obsession.

Now would you get out of a bed like this on a cold November morning at 5.00am to leave your beautiful wife or handsome husband to go and take photographs? Now here I was, essentially a walker, who did just that, leaving my wife in slumber in a super warm king sized bed to go out into the cold and dark.

A cup of tea is essential to get the brain working after a previous social evening of gin and tonics and wine with a late meal. I also had cereals and some toast.

Unlike the ‘professional’ photographers who spend hours glued to one spot capturing the dawn, I decided that I would do a quick dawn photo shoot and then do a walk. Heavy rain was forecast for 11.00am and in order to avoid that an early start was essential. The advantage of doing a walk was that it gave me an excuse not to take my tripod, filters, four lenses, spare batteries and other equipment that photographers acquire and carry around. At least one member has a telephoto lens so long and heavy he has a specially made ‘hod carrier come tripod’ to move it about. It seems to be a ‘man thing’ with these long lenses – ‘Mine is bigger than yours’. However, the bigger the lens the bigger the price can be; and some cost as much as a decent second hand car. However, they do get stunning bird and wildlife pictures. Other members specialise in flower, landscape, abstract and even nude art photography. For more of their stunning pictures (excluding nude art photography) go to:

Now I am not into the nude art photography as it would be a distraction from walking. Indeed females can be distraction as I found out on the Penwith Way in 1998. An attractive Dutch long-distance walker tried to take advantage of me (hard to believe I know), but fortunately I missed the signals. The full story will be revealed later on in the Penwith Way secret diaries so keep reading the blogs. Readers will be able to decide whether it was a missed opportunity or a lucky escape?

Driving to Craster in my car just before 7am, the sky lit up bright red and I stopped to take pictures.

I then parked in Craster and took some more sunrise pictures.

Dawn Walks were becoming attractive and I hadn’t even started.

Heading along to Dunstanburgh Castle the only company were sheep and birds. Past the castle Embleton Bay came into view with some rock formations, clearly volcanic, but lots of beautiful virgin sand, largely un-walked on that morning. Looking back Whin Sill rose from the beach with Dunstanburgh Castle perched on it.

The great thing about Dawn Walks is that the light and view was constantly changing. In order to get the photos I had to play with my ISOs, shutter speeds and my F-stops, but hopefully you will like the results?

Arriving at Low Newton at 9.13, I was disappointed to find the Ship Inn wasn’ t open for coffee until 11. After a banana and a piece of fruit cake I headed back along the St Oswald Way, rather than along the beach.

More views opened up before me

The weather forecast was for rain at 11am and at 10.55am spots started to appear. I needed my waterproofs on quick. Unexpectedly, a pill box in good condition appeared and I went in for shelter. It was very claustrophobic, dark, damp and cold. 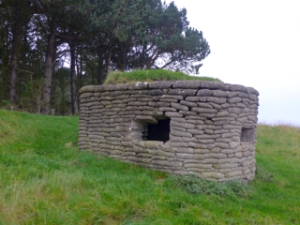 I suddenly realised it was 11am on Remembrance Day. A very poignant moment. My mind started to visualise what it would be like to face an enemy with a fairly restricted view through the slits. Very frightening. 10 mins in this location was enough for me. Soldiers sacrificed their lives for our freedom in such awful locations. We should always remember them. Sometimes in life I have come across such coincidences or as some people would say God-incidences. You do not forget such moments.

Another such coincidence or God-incidence was when I returned from Norway in 2009 and loaded about 1,000 photographs to my computer. One and only one of the photos on the computer screen was blank. I tried without success to open it. I thought I had better delete as it had never happened before. I then thought it might be a good photograph and so went to Edit to see if I could open it. It opened and to my great surprise it was my picture of Jesus suffering on the cross, which is prominent on the front of the great Nidaros Cathedral in Trondheim. I have loaded perhaps over 6,000 photos and it had never happened before or since. 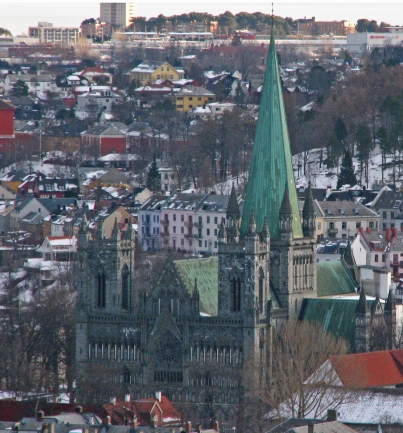 Leaving the pill box the rain came down heavy but I was warm and dry in my waterproofs.

I reached the main path back to Craster and met a walking family from Derbyshire. The father who was 92 had just completed a 3 mile walk, the son and daughter had completed all the Wainwrights and many Munros and are planning the Santiago de Compestello next year. Kindred spirits indeed and we had a great chat – a lovely way to finish the solo walk.

Now I have since thought about Sunset Walks to get views like this taken at Alnmouth. 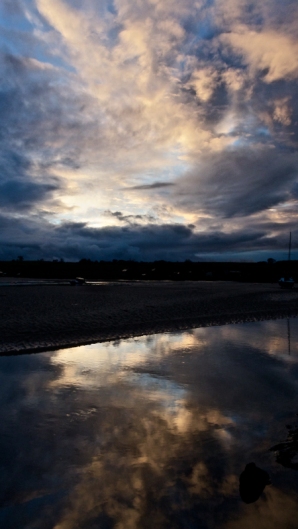 Now I am a bit eccentric at times, but not so much that I would walk into a darkening night using a torch.